Joe Levin was in junior high school the year that Rosa Parks took a stand against racial segregation on a city bus in Montgomery, Alabama, sparking a yearlong bus boycott that would serve as a catalyst for the civil rights movement.

It was 1955 and Levin was largely oblivious to the tectonic shifts shaking the very foundations of the South and his hometown, known as the Cradle of the Confederacy. But that all changed seven years later when his Jewish fraternity brothers at the University of Alabama woke up one morning to find a burning cross on their lawn. It had been planted by members of the United Klans of America after a fraternity member wrote a newspaper editorial calling for the University of Mississippi to admit a Black student, James Meredith.

“Prior to that time, I saw myself as a white Southerner,” Levin later recalled. “I had not experienced that kind of naked hatred. Once my eyes were opened, I couldn’t ignore others who were persecuted around me. What I had learned about my life was wrong.”

After law school, Levin served two years in the Army, returned to Montgomery and not long afterward started a firm with another young lawyer, Morris Dees, who had just won a highly publicized case that forced the local YMCA to allow Black children in its swimming pools and other facilities.

After winning a substantial fee in an early lawsuit, the two lawyers were able to finance a series of civil rights cases. They sued the local newspaper for printing the wedding announcements of Black couples on the Thursday “Negro news” page rather than alongside white couples’ announcements in the Sunday society pages. They successfully brought suit to change an electoral system that ensured Alabama’s Legislature would remain virtually all white. They forced the integration of the Alabama state trooper force, whose officers had brutally attacked voting rights marchers on the Edmund Pettus Bridge in Selma. And they won a landmark decision by the U.S. Supreme Court that required the Defense Department to provide servicewomen with the same benefits to which men were entitled.

It wasn’t long before both men knew they had found their calling. They wanted to dedicate their careers to taking on tough cases that could make a difference in the lives of people facing discrimination across the South – lawsuits that few other private lawyers would take on. So to continue representing clients who couldn’t pay, in July 1971, with the help and encouragement of the late Julian Bond, they incorporated a new nonprofit entity – the Southern Poverty Law Center. They hired a small staff and from then on never charged another client for their services. 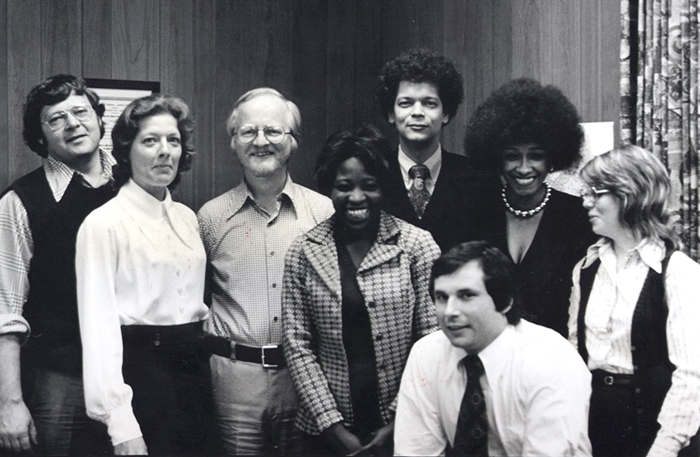 That was 50 years ago. In the following decades, with the financial support of hundreds of thousands of compassionate people across the country, the SPLC won case after case – helping to stamp out remnants of Jim Crow segregation, putting violent white supremacist groups like the United Klans of America out of business, and protecting the rights of communities of color, children, women, people with disabilities, migrant workers and immigrants, LGBTQ people and others who faced discrimination and exploitation.

“In the beginning, we were using the courts to enforce the civil rights laws enacted in the 1960s, with the aim of helping to make the promise of the civil rights movement a reality in the South,” Levin said. “Even though Congress had passed the Civil Rights and Voting Rights acts a few years earlier, legal action was still needed to root out the remnants of Jim Crow segregation that were so deeply embedded in the laws, culture and customs of the South.”

As it grew in size and stature, the SPLC continued to litigate groundbreaking civil rights cases but blazed new paths as well:

“None of us knew when we started the SPLC, of course, that our tiny law firm would have such a positive impact on the lives of so many people and grow into the dynamic, multifaceted organization that it is today,” said Levin, who is retired but remains as an emeritus member of the SPLC Board of Directors. 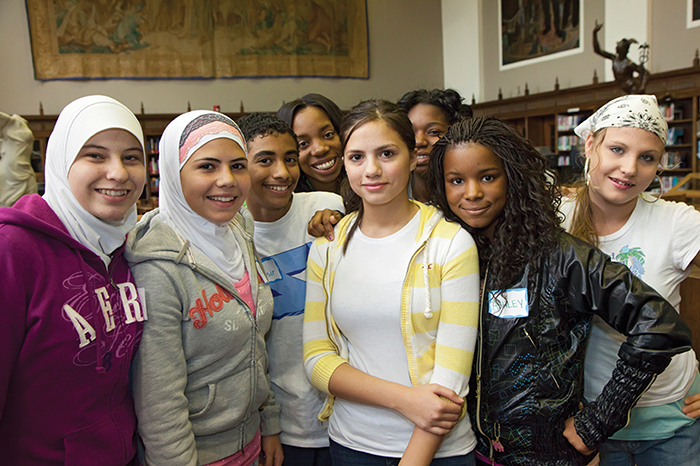 Mix It Up at Lunch Day, sponsored by Learning For Justice (formerly Teaching Tolerance), encourages students to sit next to someone new in the cafeteria. (Credit: Jim West)

Today, at 50, the SPLC has new leadership and the organization is steering a new course – staying true to its values but fine-tuning its mission and its strategies to work more collaboratively with grassroots partners across the South. In 2020, the SPLC adopted a new mission statement: “The SPLC is a catalyst for racial justice in the South and beyond, working in partnership with communities to dismantle white supremacy, strengthen intersectional movements, and advance the human rights of all people.”

As it did so often in the past, the SPLC has launched new initiatives to meet the day’s most pressing challenges – to confront hate and build trust in democratic ideals; to create a fair and equitable criminal justice system and end mass incarceration; to expand access to the ballot and eliminate discriminatory barriers to voting; to promote a just, humane and welcoming immigration system; to promote health, safety and fairness in the workplace, schools and communities; and to promote opportunity and combat discrimination in schools and the workplace.

Because its tax status as a charitable organization limited the organization’s ability to work in the political arena, the SPLC created a new nonprofit arm, the SPLC Action Fund, to lobby Southern legislatures and the federal government and to carry out work that can affect elections. It opened an office in Washington, D.C., and created new policy teams to press for changes in state and federal laws. And, after Donald Trump was elected president, it added dozens of new lawyers, paralegals, outreach advocates, education and research specialists and other staffers to help counter his administration’s radical agenda and a surging white nationalist movement that Trump embraced.

As the 2020 elections approached, the SPLC committed $30 million from its endowment to a new initiative, Vote Your  Voice, to help dozens of grassroots groups, primarily in five Southern states, build capacity and scale up their civic engagement and voter mobilization efforts during the 2020 and 2022 election cycles. 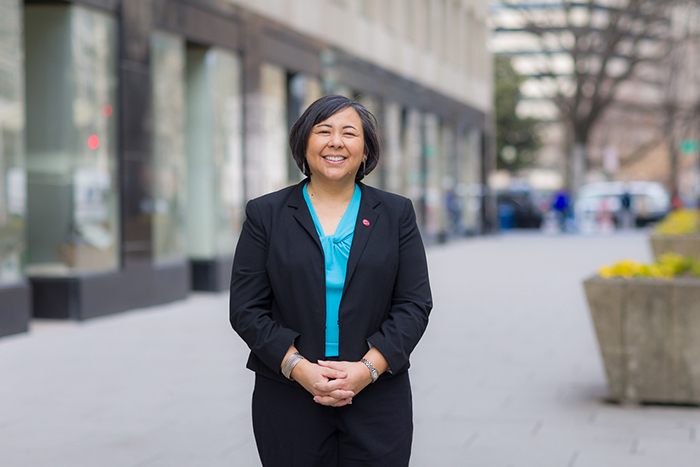 “This work is incredibly important right now, because we know that the ballot box is the key to leveling the playing field in the South and finally emerging from the shadow of slavery and Jim Crow,” said SPLC President and CEO Margaret Huang, who joined the organization in early 2020. “But, now, especially since the historic election in 2020, we’re seeing a strong resurgence of state efforts to suppress the votes of communities of color and turn back the clock on the progress we’ve made.”

Vote Your Voice is already making an impact.

So far, 64 grassroots organizations have received $23.3 million in grants. In Georgia, the grantees helped fuel record registration and turnout in the 2020 elections. In Mississippi, they challenged voter suppression by advocating for same-day voter registration, early balloting and easy access to absentee ballots. In Florida, they not only engaged Black, Latinx and other voters of color but also fought to restore the voting rights of people who have been convicted of felonies. In Louisiana, they worked to eliminate the state’s strict rule on absentee voting. And in Alabama, they continued a long legacy of voting rights activism.

“Change is coming in the South – and that change will benefit the rest of the country as well,” Huang said. “But we know it won’t be easy. It’s why we’re working shoulder-to-shoulder with our grassroots partners, who know their communities. It’s why we’re fighting for equity and justice in the courts. It’s why we’re combating the white supremacists who have been emboldened and energized by Trump’s presidency. And it’s why we’re helping teachers across the country create equitable classrooms where children learn to be good citizens in a diverse society.

“All of us at the SPLC are committed to ensuring that our nation lives up to its promise of equality and justice for all – and we couldn’t be more grateful to the many supporters who make this work possible.”

Photo at top, background in black and white, from left to right: Black children were not allowed into swimming pools or other facilities at the YMCA in Montgomery, Alabama, until a 1969 lawsuit from Morris Dees desegregated them (Photo courtesy of the Cleveland Avenue YMCA); Rosa Parks and Julian Bond examine the names of 40 civil rights martyrs inscribed on the Civil Rights Memorial on Nov. 5, 1989 – the day the SPLC dedicated the Memorial (Credit: Thomas S. England); Black Alabama state troopers joined the force following a 1972 desegregation lawsuit from the SPLC (Courtesy of the Paradise family).

In the foreground in color, from left to right: Migrants fleeing gang violence and death threats – mostly from Honduras and Guatemala – traveled to Tijuana, Mexico, where they planned to seek asylum at the San Ysidro Port of Entry (Credit: Todd Bigelow, 2018); Mary Collante and Zunilda Boone join other members of the Florida Immigrant Coalition as they prepare to go door to door during a voter registration drive on Oct. 4, 2012, in Pompano Beach, Florida. (Photo by Joe Raedle/Getty Images)