Valda Harris Montgomery was 6 years old when the handsome young pastor and his wife moved into the parsonage down the street.

Skipping past the trim houses of her leafy neighborhood, Montgomery and her friends would run into the backyard of the parsonage, grab plump figs from the branches of its trees, slip inside for tea and cookies offered up by the pastor’s smiling wife and tag along with her for rides in the couple’s shiny, electric blue Pontiac sedan.

The year was 1954. The pastor was Martin Luther King Jr., just 25 and still finishing his doctoral dissertation. The neighborhood was Centennial Hill, a segregated haven in Montgomery, Alabama, about to transform from a calm refuge from the brutalities of the Jim Crow South into the nerve center of the modern civil rights movement.

The history of that movement has been told and retold in weighty histories and somber documentaries. How a Black seamstress named Rosa Parks boarded a Montgomery city bus and refused to relinquish her seat to a white passenger. How her act of protest sparked the Montgomery Bus Boycott. How King, the new pastor of the pride of Centennial Hill – what is now Dexter Avenue King Memorial Baptist Church – became a leader, first of the boycott, then of the civil rights movement that changed the nation.

Montgomery looks back at the story through a different lens. It is the lens of a neighbor whose father, Dr. Richard Harris, was an elder statesman the young King looked up to. It is the lens of a child who remembers her eighth birthday, Dec. 1, 1955, not for her party but for the heroism of Parks on a bus that day. It is the lens of a girl whose home, just six weeks later, would be strewn with glass from a bomb meant for King. And it is the lens of a teenager who became so steeped in the community of protest that marches were a bigger draw than high school dances, and lessons in passive resistance seemed as relevant as math and science classes. 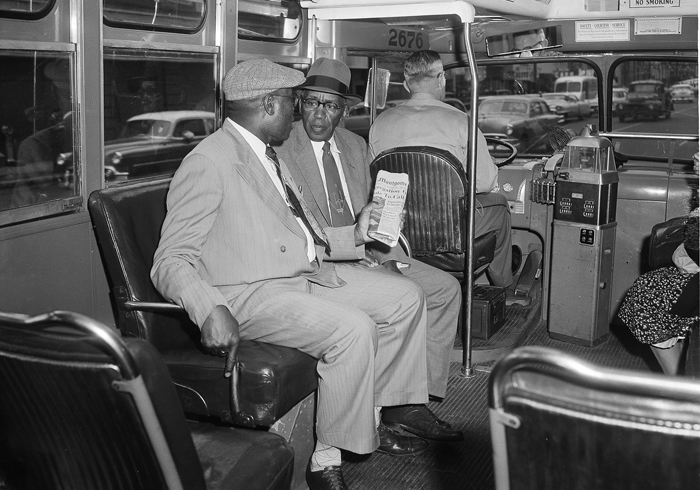 Two Black men sit in the first seat behind the driver of a city bus on Dec. 21, 1956, in Montgomery, Alabama, after a Supreme Court ruling ended the Montgomery Bus Boycott, which lasted 381 days. (Credit: Associated Press)

This week, to mark the 67th anniversary of the Montgomery Bus Boycott, Montgomery will participate in a panel discussion at the Civil Rights Memorial Center, an interpretive space across the street from the Southern Poverty Law Center’s main office that honors the lives of 40 people killed during the modern civil rights movement (1954-1968). Now 75 and a retired associate professor of clinical physical therapy at Alabama State University, she will share stories from her self-published book, Just a Neighbor.

Also participating in the discussion, at 5:30 p.m. on Dec. 7, will be Richard Bailey, Ph.D., a historian who grew up in the Centennial Hill neighborhood and who has written books on Reconstruction and the civil rights era; and Dorothy Walker, site director of the Freedom Rides Museum in downtown Montgomery.

“There is so much history that is not told about the civil rights movement, so many first-person accounts that inform what we can be doing today,” said Tafeni English, director of the Civil Rights Memorial Center. “While there are no longer Jim Crow laws, we do know that Black people today often feel unsafe in public spaces. By holding this panel, we want not only to commemorate the Montgomery Bus Boycott and the contributions of all those involved in the movement, we want to add context to things that we can do today to ensure equity and inclusion.”

Paradoxically, it was segregation that created the Black-centered life of Centennial Hill. And it was in the years after segregationist laws were dismantled that an interstate highway cut through the neighborhood, ultimately destroying its character. Today, the Dr. Richard Harris House still stands, lovingly preserved by Montgomery and her family as a nonprofit museum. The Dexter Avenue King Memorial Baptist Church, where King, Parks and others organized the bus boycott, is also a much-visited historic landmark. But much of the rest of the neighborhood is blighted.

In the days when Montgomery was growing up, though, Centennial Hill was a haven for a vibrant community of Black entrepreneurs, doctors, lawyers, educators, politicians and writers, among others. Barred, as were Black citizens throughout the South, from equal access to businesses, medical facilities, hotels and schools, among other institutions, the residents of Centennial Hill created their own. The tidy houses of the neighborhood were shaded by big trees. Children felt safe walking and biking the streets. And a lively collection of shops, restaurants, small businesses, theaters and clubs serviced a relatively affluent Black clientele.

When King and his wife moved in, they became close to Montgomery’s family. Harris, a local pharmacist, was a retired Air Force captain who had served with the famed 99th Fighter Squadron, the country’s first Black flying squadron and among the aviators known collectively as the Tuskegee Airmen. His grandfather, John W. Jones, had been an Alabama state senator during Reconstruction, when hundreds of Black leaders throughout the South were elected to political posts. About a decade older than King, Harris was treated by the young pastor and others in town as something of an elder statesman. Occasionally King would join Harris for drinks and dinner at the Officers Club at Maxwell Air Force Base, where Harris, as a veteran, had privileges.

Given Harris’ respected role in the Centennial Hill community, it was no surprise when the pharmacy he owned and operated, Dean Drug Store, became the meeting place for organizers of the bus boycott. Its welcoming lunch counter offered a place for them to sit, replenish themselves and strategize. In between dispensing prescriptions, Harris, wearing a headset, would dispatch cars to help Black men and women get to work without taking a bus.

Given the role that Harris played in the boycott, it was also no surprise that when the terrifying racist backlash came to Centennial Hill, it crashed right into the Harris family house.

“[King’s baby daughter, Yolanda] was in the bassinet. Daddy was at work, Dr. King was at a meeting, Mrs. King was at her home,” Montgomery recalled of the night of Jan. 30, 1956, when the first bomb hit King’s house. “My mom was next door, using the neighbor’s encyclopedia to work on an assignment when the bomb exploded. We heard windows shattering and breaking. And my mom rushed back home.

“That was the beginning of the bombings.”

The blast had warped the picture window in Montgomery’s living room and shattered the glass in her parents’ bedroom, also at the front of the house.

“We weren’t allowed to play in the front rooms after that.”

As the bombings and threats escalated, Montgomery’s parents remained in the thick of the protests. The drugstore became a place for people participating in the boycott to leave packages and messages. Harris kept cash on hand to bail protesters out of jail. And he continued to dispatch cars, using code because he believed his phones were tapped.

For the children, nights could be terrifying, Montgomery said.

On Jan. 10, 1957, she and her sister were asleep at their grandmother’s house, next door to their own, when an explosion at the taxi stand across the street shattered 14 windows of the house. Through the windows, Montgomery said she saw members of the Ku Klux Klan gathered near King’s front porch, where about a dozen sticks of dynamite had been thrown but failed to explode. Above Montgomery’s head, a large triangle of glass had lodged in the canvas window shade. If not for the thick canvas, it could have hit her.

“All I could hear was glass shattering around me,” Montgomery wrote of that night in her book. “It took many years for me to get over the sound of breaking glass.”

Montgomery’s house continued to be a center of movement activity. Several years later, when the Freedom Riders – young activists challenging segregation at interstate bus terminals – were brutally attacked at the Greyhound Bus Station, Montgomery’s parents gave them haven for four days. Harris’ first cousin, who ran a restaurant nearby, served spaghetti dinners. Harris brought bandages and medical supplies from the drugstore to dress their wounds. John Lewis, the young civil rights leader who had been at the bus station when rioters attacked, sat in a chair one night cradling a bleeding head wound. And in the kitchen, King, Lewis, Ralph D. Abernathy, James Farmer, Diane Nash and others who were to become heroes of the movement met night after night to develop strategy for continuing the rides.

Throughout her childhood and young adulthood, the terrors and triumphs of the civil rights movement were a constant in Montgomery’s life. She recalls that when King was stabbed with a letter opener at a book signing in New York in 1958 and returned home to recuperate, she showed up at his house to play. King told her not to be afraid of his bandages and wrapped her in a hug.

That is the way she remembers King and the other leaders of the civil rights movement – as neighbors, the sort of neighbors not too busy trying to change the world to give a frightened little girl a hug.

In sharing her memories of that time, Montgomery said she is seeking to inspire people to keep protesting, to keep fighting, to keep pushing, even in today’s discouraging times.

“We’re really at the point of tears,” Montgomery said. “To see the Confederate flag again, to see these people shouting and screaming the way they were [at the Jan. 6 attack on the U.S. Capitol], it triggers us.

“I’m hoping that people will educate themselves and see and appreciate the struggle, that all the things people suffered in order for us to have the rights we have now, to have those rights written into law, that all of these things can easily be taken away.

“People may think this is all in a book, all in the past. But it’s not. I want people to be aware. And to vote. To register, and to vote.”

Picture at top: Valda Harris Montgomery stands at the door to her parents' house in the Montgomery, Alabama, neighborhood of Centennial Hill, which included Martin Luther King Jr. among its residents. She is taking part in a panel discussion at the SPLC's Civil Rights Memorial Center marking the 67th anniversary of the Montgomery Bus Boycott. (Credit: Brad Harper via Imagn Content Services)