Whether the agency wanted it or not, the U.S. Border Patrol started getting help last June from an organized group that detained and turned over undocumented immigrants in Arizona’s desert. That group is headed by J.T. Ready, until recently a member of the National Socialist Movement (NSM), and largely peopled by other members of America’s largest neo-Nazi organization. 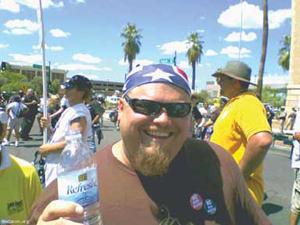 It was a nifty public relations ploy for Ready — who was convicted of assault in a 1992 incident and was twice court-martialed and given a bad-conduct discharge when he was a Marine in 1996 — and his cohorts. He called a press conference in Pinal County’s Vekol Valley, known as a drug trafficking and illegal immigration route. There, he paraded his heavily armed group for the news cameras, taking care, however, not to flaunt swastikas or other neo-Nazi symbols.

One NSM member, Harry Hughes, posted plenty of photos of the migrants the group said it stopped, as well as pictures of Border Patrol agents taking them into custody. Those photos, which depicted no violence, were at odds with Ready’s rhetoric. “This is the Minuteman project on steroids. We’ve got people with assault weapons,” Ready told a TV reporter. “We will use lawful, deadly force when appropriate.”

Ready, a one-time volunteer with the Minuteman Civil Defense Corps civilian border patrol group, is well known in Arizona, where he has run unsuccessfully for the state House of Representatives and the Mesa City Council. A vocal critic of undocumented immigrants, Ready has voiced unsupported claims about them carrying a variety of diseases across the border. In 2006, he formed his own anti-immigrant group, America First, and led a protest at the Mexican consulate in Phoenix. He said that Mexico should be designated a “threat nation” because “they are openly subverting our laws and sovereignty.” That same year, he won a post as a GOP precinct committeeman in a west Mesa district.

In September 2007, Ready marched under a swastika banner in Omaha, Neb., with brown-shirted members of the NSM, a group he later joined. He also created a profile on the social networking site New Saxon, run by the NSM.

Within a few weeks of forming his border watch group, Ready said he quit the NSM. The group’s top official, Jeff Schoep, confirmed as much for the Phoenix New Times newspaper. But the NSM border outings continue. NSM member Hughes wrote on his blog in mid-September: “Now that autumn is almost here, things are going to get more interesting on the front lines in the battle against crime from south of the border.”