In the weeks following the terrorist attacks in France, major players in the American anti-Muslim movement have unleashed a tirade of bigotry and renewed their energies in attacking the federal government. But not to be left out, prominent anti-immigrant figures and politicians have also joined the show.

Former congressman Tom Tancredo called for a ban on all Muslim immigration to the United States, and rabid far-right commentator Ann Coulter said the same for France, suggesting that it might be a good time for the French to “take a little pause in Muslim immigration for a while.”

But that was only the beginning of their outrage, which quickly turned to focus on criticizing Rep. Andre Carson (D-IN), for his appointment to the House Permanent Select Committee on Intelligence. Carson is the first Muslim to sit on the committee.

Robert Spencer, who runs the website Jihad Watch and is closely tied to anti-Muslim activist Pamela Geller, questioned Carson’s position and lamented that he “already has entrée to highly sensitive areas” of the federal government. The anti-Muslim blog “Creeping Sharia” called Carson “delusional” and “dangerous” and claimed, “he does not belong on any intel committee.” A post about Carson on the website of the increasingly extreme American Thinker also concluded, “With radical Muslims parading in and out of the White House over the past six years, installing Carson on a national security committee is more proof that the Islamic threat we face is inside our own government.”

The fallacy in the Thinker’s argument -- that all Muslims are radicalized and bent on destroying the West -- is only the beginning in this new round of anti-Muslim hate. Others have reacted to the Jan. 7 attack in Paris by ratcheting up completely fabricated concerns, like so-called “no-go zones” in the United States and United Kingdom where non-Muslims are no longer welcome and, in fact, targeted upon visiting.

The idea has received considerable airtime thanks to repeated statements from Louisiana Gov. Bobby Jindal, who recently doubled down on his claims that these areas exist in a interview with CNN, stating, "I think your viewers know absolutely there are places where the police are less likely to go. They absolutely know there are neighborhoods where they wouldn't feel comfortable." 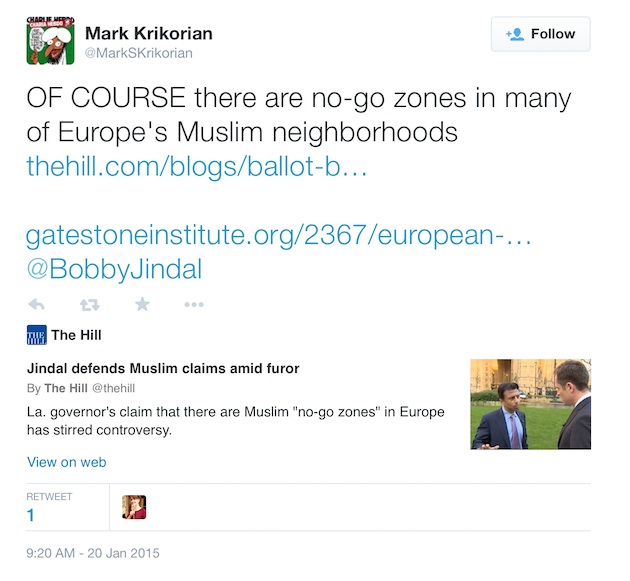 But anti-immigrant leader Mark Krikorian of the Center for Immigration Studies (CIS), a nativist think tank, echoed Jindal and Emerson’s comments in a tweet on January 20. "OF COURSE there are no-go zones in many of Europe's Muslim neighborhoods," the tweet said.

Krikorian is no stranger to anti-Muslim sentiment, once writing, “I’m afraid that in the Islamic world democracy faces the problem of a vicious people, one where the desire for freedom is indeed written in every human heart, but the freedom to do evil.”

It doesn’t stop there. There has also been increased hand-wringing about Sharia law supplanting Constitutional law. A litany of anti-Muslim leaders signed a letter penned by Frank Gaffney, head of the Center for Security Policy praising Jindal for his recent comments about Sharia. Other notable signatories included Brigitte Gabriel, head of the anti-Muslim ACT! for America and Tony Perkins, president of the anti-LGBT hate group Family Research Council.

Then, last week, some in the anti-Muslim movement decided to take to the streets to voice their opposition to Islam.

On January 17, a “Stand with the Prophet” event aimed at combatting Islamophobia took place in Garland, Texas. In response, Muslim-basher Pamela Geller organized a demonstration that attracted a number of extremists, including representatives from the anti-Muslim group The United West and Ruben Israel, part of the Los Angeles-based hate group Official Street Preachers. In an interview with The United West at the protest site, Geller stated, “The Islamic leadership in this country is holding a conference to restrict our free speech. It’s the same exact premise, it’s the same ideology, it’s the same system of governance, the Sharia, that was behind those murders (in Paris).”

There are voices that disagree. In a recent op-ed in The Tennessean, for example, Paul Galloway, executive director of the American Center for Outreach, which works to bring Muslim voices to the Tennessee political stage, wrote that, “More and more people are starting to see the symbiotic relationship between Muslim terrorists and the anti-Muslim propaganda machine.” This is certainly the case, but the propaganda from anti-Muslim quarters continues to spread.