In the wake of the Malheur standoff, antigovernment radicals are aiming to swell the ranks of far-right elected officials who are already promoting 'county supremacy,' but a number of them lost their elections this past week.

Beyond just the numbers of supporters who showed up to support the radicals who occupied the Malheur National Wildlife Refuge in Oregon for six weeks this winter, the standoff revealed the growing influence of the antigovernment movement in the Pacific Northwest in several ways – particularly its growing clout among elected officials who subscribe to extremist belief systems.

A significant number of state legislators – including Reps. Matt Shea and Graham Hunt of Washington, Rep. Dallas Heard of Oregon, and Reps. Heather Scott, Sage Dixon and Judy Boyd of Idaho – showed up at the scene of the standoff near Burns, Ore., in support of the occupiers. And a number of “constitutional” county sheriffs – notably Glenn Palmer of neighboring Grant County, who now faces an Oregon Department of Justice investigation for his role in the standoff – expressed support for them as well. So did ex-Sheriff Richard Mack of the Constitutional Sheriffs and Peace Officers Association.

Shortly after the Malheur ordeal ended, Oregon Public Broadcasting’s John Sepulvado revealed in an investigative report how a cadre of Republican legislators – led by Shea and Heard, along with Nevada Rep. Michele Fiore – participated in the standoff at key junctures, particularly in its wrapup at the end, when a handful of holdouts remained inside the refuge.

Since then, momentum in support of the antigovernment agenda in a number of rural Northwest counties has been building, and a number of antigovernment candidates have been stepping forward seeking elected office as well. Spencer Sunshine of Political Research Associates recently detailed the extent to which far-right candidates are seeking office in Oregon at both the county and state levels, describing “a slew of candidates linked to the so-called Patriot movement” on the May primary ballot there.

However, this week's primary election results in Oregon and Idaho were profoundly disappointing for these candidates. 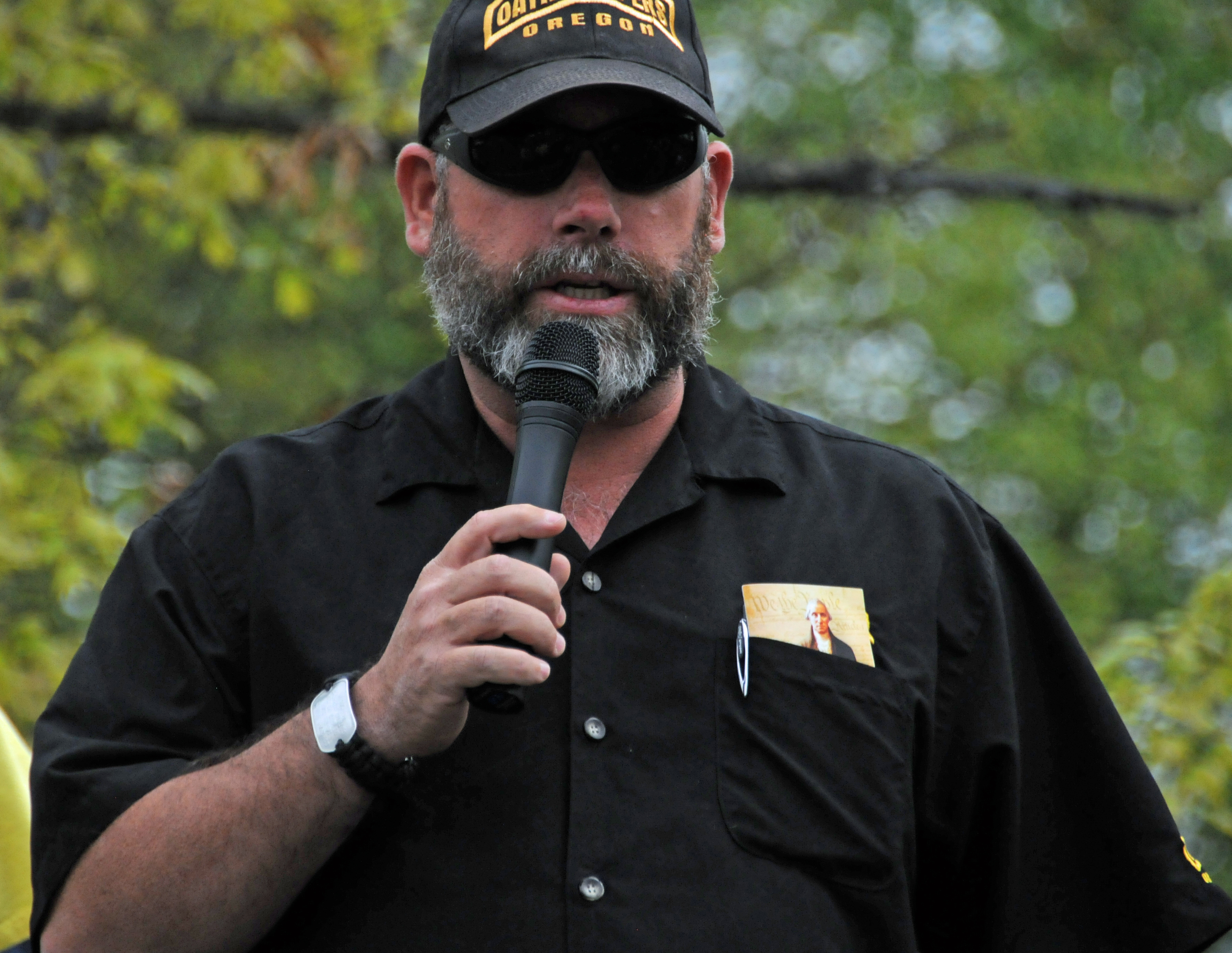 Joseph Rice, speaking at the protest over the Sugar Pine Mine in Medford in April 2015.

Chief among these is Joseph Rice, one of the leaders of the Oath Keepers confrontation with federal authorities over mining rights at the Sugar Pine Mine in Grants Pass in the spring of 2015. Rice is running for county commissioner in Josephine County, and as a recent profile in the Guardian makes clear, is attempting to play down the extremism of his associates while advocating for “county supremacy.”

However, when Tuesday's election results were tallied, Rice had finished a distant fifth in the field of ten candidates with 9.45 percent of the vote.

Yet a number of these candidates shared Rice's fate on last Tuesday, particularly in Harney County, Oregon, the site of the Malheur standoff. There, two candidates for the county commission who openly aligned themselves with the occupants, Anna Jo Surber and Charmaign Edwards, garnered only 1.95 percent (last in a field of four) and 3.74 percent (fifth out of eight), respectively, in their separate races. A candidate in Baker County who also pledged his affiliation with the antigovernment faction, Kody Justus, also apparently went down to defeat, though somewhat narrowly, by 38 votes. And in Idaho's Kootenai County, a "constitutionalist" candidate for sheriff, John Green, lost by a wide margin, 61 percent to 39 percent, to incumbent Republican Sheriff John Wolfinger.

A handful of other candidates aligned with constitutional sheriffs, including Oregon Senate GOP candidate Dennis Linthicum of Klamath Falls, managed to win their primaries, while others still face the general election this fall.

The key driver in the Malheur takeover agenda –– the extremists’ claims that the federal government has no right to own public lands – has, since the standoff, become a major organizing focus for elected officials, including legislators, county commissioners, and county sheriffs throughout the region who are sympathetic to these claims. As a March 2016 report by the Center for American Progress detailed, the violent radicalism of the Bundys and their antigovernment supporters are only the point of a long spear of an anti-federalist campaign financed by such corporate entities as the Koch Brothers to place public lands into private ownership, and manifested as well by the legislative agenda promoted by such groups as the taxpayer-funded American Lands Council and its leading light, Utah lawmaker Kenneth Ivory.

One of the most striking instances of this agenda being promoted by elected officials recently occurred in northeastern Washington, where the county commissioners of four adjoining counties – Pend Oreille, Stevens, Okanogan, and Ferry – met in an unusual “Quad County” session to discuss “coordination” in an effort to declare county supremacy and seize ownership of federal lands. “Coordination,” as Sunshine explains, is the “false idea that federal agencies must comply with county government plans regarding land-use decisions, usually about natural resource extraction on federal lands that are within a county’s borders.” The ALC’s legal strategy for achieving this end was referenced throughout the session.

At one point, the discussion veered into a paranoid examination of the supposed role that the United Nations’ “Agenda 21” program is playing in shaping federal land-use policy, a conspiracy theory frequently flogged by the Patriot movement followers.

The highlight of the gathering was a lengthy slide-show presentation about the Malheur standoff by Pam Leslie of the Center for Self-Governance, a Tea Party-affiliated group known for flogging a variety of conspiracy theories, such as those about chemtrails and Common Core. She described the scene in Burns in some detail, concluding that the death of protester LaVoy Finicum during the arrest of the occupation’s leaders was suspicious, and then describing the “federal tyranny” that has followed as the “FBI roundup of protesters continues.” 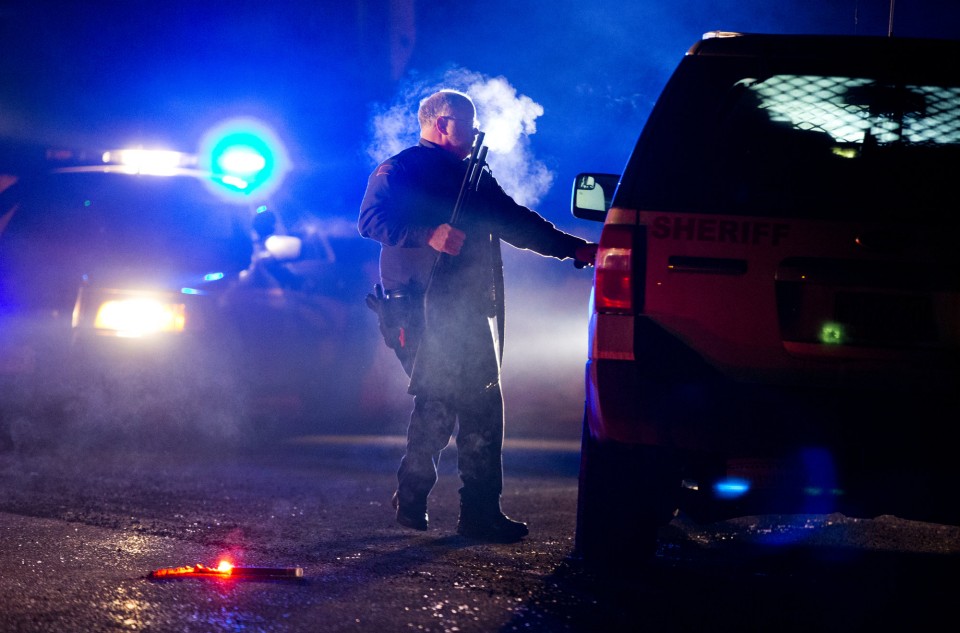 Grant County Sheriff Glenn Palmer examining a vehicle during the Malheur standoff. Courtesy of The Oregonian.

The considerable presence of "constitutional" sheriffs in the region is especially problematic, since the ideology behind the name maintains that the county sheriff, and not the federal government, is the supreme law of the land, creating conditions for confusion and conflict whenever federal law-enforcement agencies act locally.

The saga of Grant County's Sheriff Palmer is especially cautionary in this regard: Palmer was initially recruited for assistance by members of the Malheur occupiers, but declined; however, he became so embroiled in the affair anyway that he is now the subject of a state investigation for his behavior during the standoff. However, Palmer is also being investigated for his bizarre hiring of dozens of "special deputies" assigned to assist him in his "constitutional" duties, again underscoring the fraught nature of electing right-wing extremists to positions of real power, especially law enforcement. These sheriffs so thoroughly blur the lines of law enforcement that they pose a serious risk for federal law-enforcement agencies, as well as any residents in their purview.

The rural milieu in which this is occurring frequently focuses on resentment of urban liberals and minorities, whipped up by “Patriot” ideologues such as Gavin Seim, the Ephrata-based “liberty speaker” who played a key role in the Malheur denouement, and who has built his career on whipping up extremist fervor over gun-control legislation and police behavior. Like Seim, another “Patriot” speaker who has been touring the Northwest spreading the “constitutionalist” gospel has been Florida-based radio talker KrisAnne Hall. (Seim himself is currently on a national speaking tour, touting his Malheur experience.) 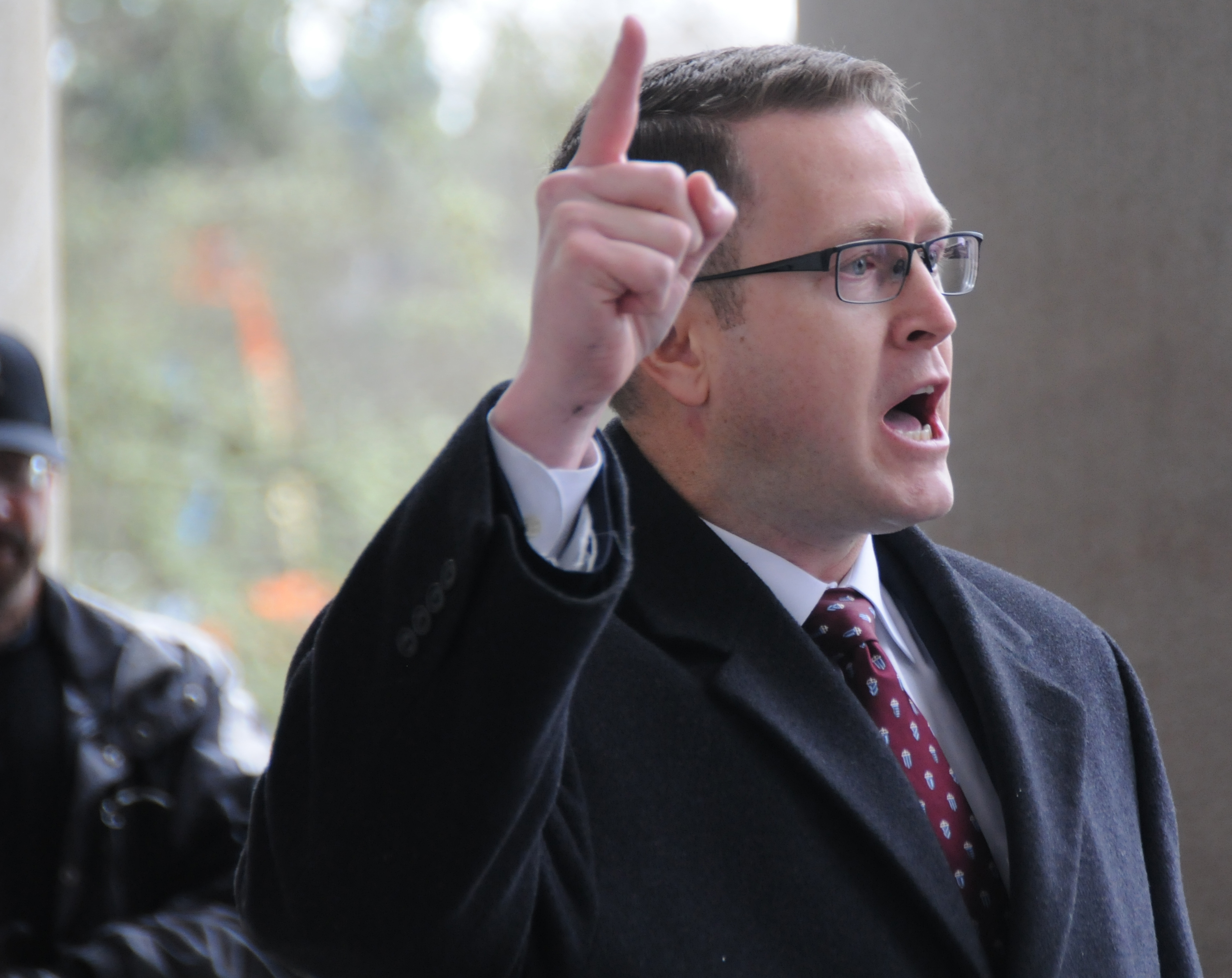 Matt Shea speaking at the Olympia Statehouse on Feb. 7, 2015.

Probably the most influential elected figure on the Northwest “Patriot” scene has been Shea, a Republican from Spokane Valley first elected in 2008 and an unapologetic spokesman for “constitutionalist” ideals and a frequent purveyor of far-right “New World Order” conspiracy theories. Shea turned up among a group of Oath Keepers, III Percenters, and others in Olympia in February 2015 to protest the state's policy banning guns from the Statehouse floor, and made a long speech in which he laid out a list of 27 grievances, including “directing government workers to spy on Americans and create linkage charts of patriotic Americans,” “carrying out military drills and lockdowns in American cities,” and “allowing the establishment of Sharia Law in parts of our country.”

In spite of his long record of extremism, Shea nonetheless has risen in the ranks of House Republicans, and is currently the House Assistant Minority Floor Leader. In recent months, however, Shea’s once-robust House “Liberty Caucus” has taken a hit: Rep. Graham Hunt, one of his cohorts, resigned his House seat amid a scandal over his apparent exaggeration of his military-service record. His frequent cohort in the House and at extremist gatherings, Rep. Elizabeth Scott, R-Monroe, planned to vacate her House seat in her bid for Congress in the race for Washington’s 1st District against incumbent Democrat Suzan DelBene, but recently announced that, because of health concerns, she was forced to drop out of the race, and would only serve out her current legislative term. All of which means that the “Liberty Caucus” appears to be down to two members: Shea and Rep. David Taylor, R-Moxee.

In the meantime, another would-be antigovernment candidate, Anthony Bosworth of Yakima (who was an active participant in the Malheur takeover), was recently arrested on domestic violence charges for allegedly assaulting his daughter. There is no indication, however, on his Facebook page or elsewhere that he is planning to drop out of the race.

Here is a list of elected officials and known candidates with “constitutionalist” or antigovernment movement associations, or who have engaged in enacting the movement’s extremist agenda in the Pacific Northwest for the 2016 election: