From its adoption first by white nationalists, and then by 4chan trolls intent on ‘triggering the libs,’ the well-known hand signal’s use points to deeper concerns.

The smirk that almost inevitably accompanies the “OK” sign, that simplest of hand signals, is the dead giveaway in the shroud of internet-age befuddlement: Does the sign, the thumb and forefinger joined together in a circle, the remaining three fingers splayed out behind, mean “all’s good?” Or does it mean “white power” instead?

The smirk gives away the proper answer: You’re being trolled.

The social-media-driven controversy over the meaning of the well-known hand sign has arisen in part as the result of a deliberate hoax concocted on the internet message board 4chan, which in addition to its well-earned reputation as a gateway to the racist “alt-right” is perhaps more broadly known as the home of trolling culture.

So when it gets flashed during a national broadcast, or during a video being shot to promote the Coast Guard, or by a cluster of Proud Boys and “Patriots,” what it’s about most of the time is a deliberate attempt to “trigger liberals” into overreacting to a gesture so widely used that virtually anyone has plausible deniability built into their use of it in the first place.

The problem, of course, is that there are white nationalists, neo-Nazis and Klansmen who have increasingly begun using the use of the symbol both to signal their presence to the like-minded, as well as to identify potentially sympathetic recruits among young trolling artists flashing it. To them, the configuration means WP, for “white power.”

This use of the signal preceded the 4chan hoax that made it go viral. A number of alt-right figures, notably white-nationalist guru Richard Spencer, published photographs of themselves using the symbol as early as 2016. Milo Yiannopoulos adopted the symbol on social media as early as 2015.

But by then, the alt-right had already long weaponized the trolling culture and its use of irony to create a hall of mirrors surrounding such “memes.” These can easily be found in other alt-right “ironic” constructs, such as the hoax religion of “Kek” (and its home country, Kekistan), or its adoption of Pepe the Frog as a mascot.

In early 2017, after a controversy arose over whether Gateway Pundit publisher Jim Hoft and a writer for his site flashed the “white power sign” at the White House Press Briefing Room, the trolls at 4chan responded with a hoax they titled “Operation O-KKK.” The plan? “We must flood twitter and other social media websites with spam, claiming that the OK hand signal is a symbol of white supremacy. Make fake accounts with basic white girl names and type shit like: OMG that’s so truuuuu…”

The intent: “Leftists have dug so deep down into their lunacy. We must force [them] to dig more, until the rest of society ain’t going anywhere near that shit.”

A number of media outlets bit, running credulous pieces warning that the old “OK” sign now had a darker connotation as an alt-right symbol. Somewhat in reaction, the Anti-Defamation League published a piece dismissing the whole question as a product of the 4chan hoax. (The piece has since been updated with a more nuanced analysis.)

This became the preferred narrative about the hand signal’s meaning. When White House aide Stephen Miller was photographed appearing to pose while making “W” and “P” hand signals, and social-media accusations flew claiming it proved his affiliation with white nationalism, the fact-checking site Snopes.com flattened such talk by determining that was “false,” based mainly on the claim’s ostensible origins as a hoax. 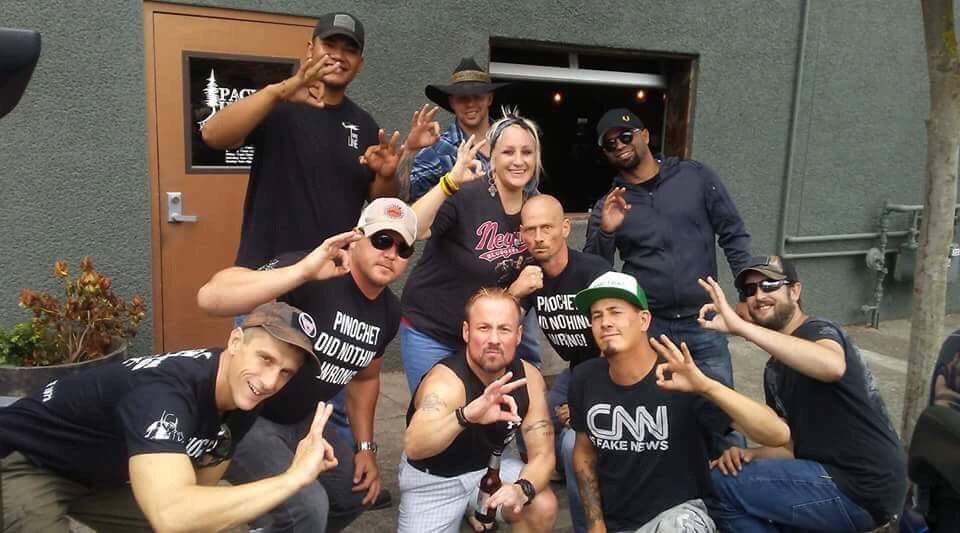 Since then, the hand signal’s use has nonetheless spread. It’s used “ironically” by a number of Trump supporters at far-right rallies. It’s been particularly prominent among far-right street protesters such as the Proud Boys and the Northwest-based Patriot Prayer, whose members have prominently displayed the sign in group photos and during street protests. 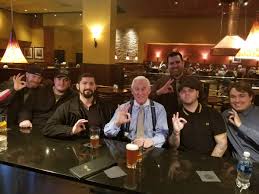 Roger Stone and the Proud Boys in Salem, OR. From Twitter.

At a gathering of Proud Boys in Salem, Oregon, that hosted former Trump adviser Roger Stone, the entire group was photographed making the sign.

So when a former White House aide named Zina Bash was  accused of flashing the sign during confirmation hearings for Supreme Court nominee Brett Kavanaugh while seated directly behind him on September 4, an uproar arose on social media led by Twitter users claiming that she was making a surreptitious “white power” signal to knowing viewers.

Just as quickly, however, mainstream media accounts shut down discussion of the matter by referring to the established narrative, explaining the signal’s spread entirely as a 4chan hoax. Eventually the whole matter was dismissed as liberal silliness.

However, that narrative obscures the reality of the darker undercurrents behind the spread of the “OK” sign as a far-right signal. In addition to being adopted by Trump-friendly young people who mostly see it as a way to “trigger” liberals, it’s also been adopted by militiaman “Patriots” (though it should be noted that “III%” militiamen use a reverse form of the OK sign as a way to signal membership in their mythical “3 percent” of the populace ready for a revolution).

Overt neo-Nazis such as Andrew Anglin mostly make fun of the whole concept of hand signals (he even ran a vulgar cartoon on the Daily Stormer weighing in on the “controversy”). Yet its use keeps popping up in group photos of far-right hate-group members enjoying like-minded company. Its ubiquity seems to make its use by racists and trolls alike irresistible.

Dismissing the spread of the hand signal as a hoax overlooks two hard realities: first, that its increasing use gives open license to actual racist ideologues to operate and recruit under the cover of the “plausible deniability” established by less ideological young trolls; and second, that any kind of wink-and-nudge interaction with the racist right is a direct route to its normalization.

While the people who flash the sign can always readily claim innocence of any racist intent by attesting that they “only meant it ironically” and that their real purpose was to anger liberals, minorities and “social justice warriors (SJWs),” they can’t so readily escape ethical culpability for their role in the spread of hateful ideologies and their effects, including a global spike in hate crimes. Nor can they blame members of the minority groups who reasonably find such hand signals potentially threatening for being upset.

Radical fascists have, after all, historically taken advantage of the “marketplace of ideas” as a useful platform for spreading their toxic ideology — the outcome of which always entails the utter destruction of that marketplace and its replacement with authoritarian propaganda. When far-right ideologues retreat to a “free speech” defense amid claims of left-wing persecution — which is what memes like the “OK sign” are designed to do — this is always their long-term goal.

Natalie Wynn, a popular YouTube star who posts under the nom de plume ContraPoints, explained this dynamic vividly in a 2017 video titled “Decrypting the Alt-Right”:

More obscure symbols can be useful as a kind of secret handshake that lets Nazis recognize each other without normies taking notice. The best symbols to use for this purpose are ones that are not primarily associated with fascism, or at least have some other meaning, such as the othala rune, or the iron cross. Better still are symbols that, until adoption by fascists, are completely innocuous. Modern fascists have taken to using almost arbitrary emoji as a way to wink and nod at each other, notably the frog, after Pepe, the milk, and the OK sign.

… Another advantage of using innocuous symbols is that when leftists try to point those symbols out, the fascists can always say, “These gullible SJWs now think that even the OK sign is racist. Is there anything they *don’t* think is racist?”

Emily Pothast observes at Medium: “Its ambiguity is precisely why it’s such an effective trolling tactic. … When successful, this kind of trolling makes otherwise credible journalists and public intellectuals look like buffoons, either by overreacting to an ambiguous stimulus or by missing the whole context of the gesture.”

Salon writer Amanda Marcotte delved this point further on Twitter: “Part of the problem is that if, hypothetically, someone flashed white supremacist symbols at the camera, the point of the stunt would be to get liberals wound up, so they can then claim that liberals are just imagining things,” she wrote. “That was what the OK symbol was literally invented to do: Both serve as a white supremacist symbol and also one that is just ordinary-enough looking that when liberals expressed outrage, the white supremacist could play the victim of liberal hysteria.”

So what does it mean when someone flashes the OK sign? In the end, it can mean almost anything, but primarily it’s one of three things:

The first of these (and its most common, but also most declining, use) is harmless. But it can’t credibly be claimed by anyone who has a record of involvement with the many far-right elements that swirl both around the Trump White House and outside it as well. Nor can it be claimed by street-protesting Proud Boys chanting far-right slogans.

The second is less directly harmful, but hardly innocent of wreaking havoc. The normalization of the radical right under the rhetorical protection of self-proclaimed “centrists” and “libertarians,” particularly those who spread conspiracy theories and are often labeled the “alt-lite,” is a legacy that could last a generation or longer.

The third is, of course, reflective of a toxic worldview and authoritarian politics, bent primarily on the destruction of liberal democracy. At the moment, it remains the smallest bloc of the three.

Yet trolling culture, the ethos that fuels the second motivation, has proven a direct gateway not just to the alt-right, but also to even more poisonous cultures such as that of woman-hating “incels”. It’s one thing to shrug off misbehavior by embracing the “troll” label, but it still means you’re a participant in a toxic subculture. It's easy for the second motivation to morph into the third.

So when someone flashes the “OK sign” with that knowing smirk, it’s not just a harmless act that can be dismissed. It may or may not mean that they are a white nationalist attempting a sly signal. But the sign unquestionably identifies the user as one thing: a troll.