A broad range of Christian Right, antigovernment and other far-right extremists will appear at the gun-toting, anti-LGBTQ Sanctuary Church’s Rod of Iron Freedom Festival in Greeley, Pennsylvania, from Oct. 8-10. 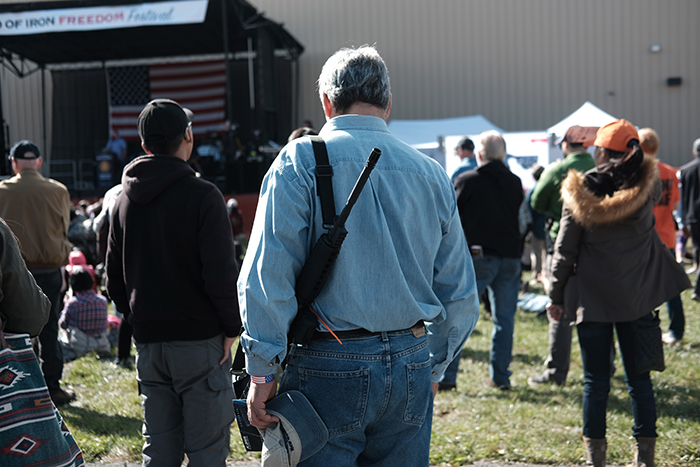 John Lott, a discredited researcher who briefly served in the Justice Department and uses dubious research to claim undocumented immigrants commit more crime, and Richard Mack, founder of the Constitutional Sheriffs and Peace Officers Association – a group that claims sheriffs have more power than the federal government – will also speak. 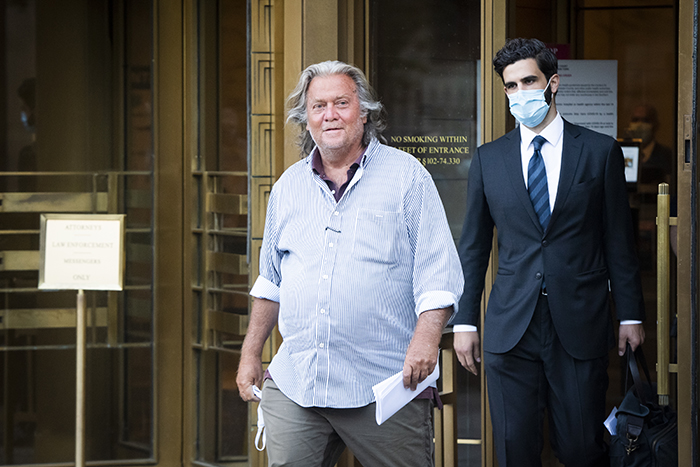 Frederick Clarkson, a senior research analyst at social justice think tank Political Research Associates (PRA), told Hatewatch the Rod of Iron festival shows Moon’s influence, in spite of the spectacle of his church and concerns about it being a cult.

But the festival speakers list shows “it’s an organization with clout and influence,” Clarkson said. 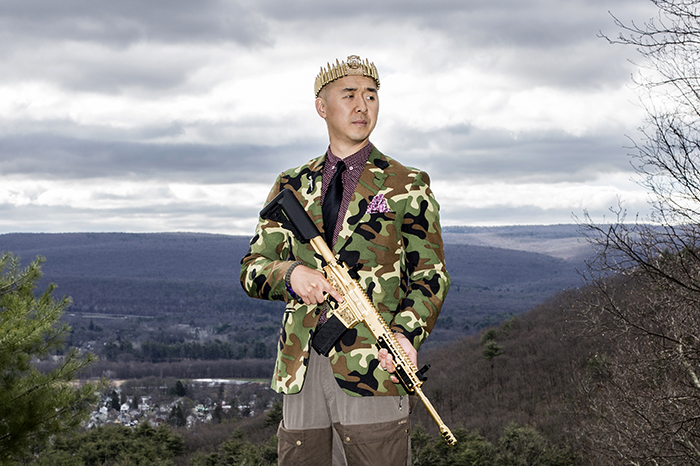 Rev. Hyung Jin "Sean" Moon poses with his gold AR-15 "rod of iron" at his home in Matamoras, Pennsylvania, in 2018. (Photo by Bryan Anselm/Redux for The Washington Post via Getty Images)

Moon made inroads with the antigovernment movement and the far right thanks to his pro-Trump rhetoric and stance on firearms.

Rod of Iron is a staunchly pro-Second Amendment group. Moon made headlines in 2018 when he oversaw a blessing ceremony for Sanctuary Church members and their assault rifles, which Moon views as Biblical “rods of iron” to rule the coming heavenly kingdom built by his followers on earth.

Moon wears camouflage suits and a crown of bullets. During a 2018 interview, Moon told VICE News his appearance was “a little wacky” but “a fun way to talk about serious issues.”

These issues include calling left-wing politics “political Satanism,” telling his followers godly people “have to fight” communism, focusing on the “spiritual nature of the battle" to re-elect former President Donald Trump and claiming Capitol police and antifa made a deal to “instigate and try to make the Trumpers look bad” on Jan. 6.

Saccone will speak at the festival, but his topic is not stated on the festival’s website. Both Moon and Saccone attended the Jan. 6 protest that became an insurrection.

“We are storming the capitol,” Saccone said in a now-deleted Facebook post. “Our vanguard has broken through the barricades. We will save this nation. Are u with me?” 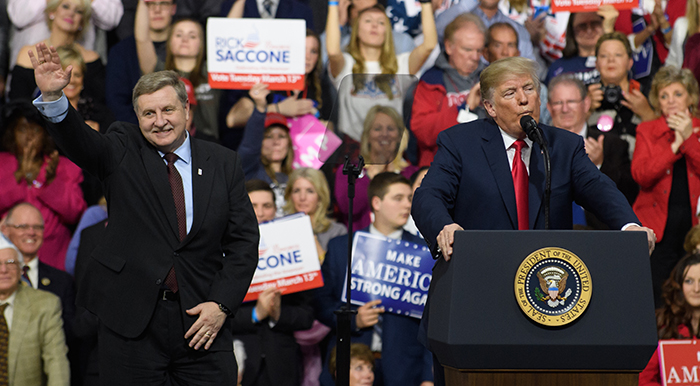 Saccone also posted a Jan. 6 photo with Pennsylvania state senator Doug Mastriano, who has also appeared at Rod of Iron events, according to VICE.

None of the men face charges for attending the Jan. 6 protest.

Mastriano signed a letter in December 2020 asking the delegation to object to the state’s Electoral College votes cast in favor of President Joe Biden. Mastriano also traveled to Arizona to observe the Republican-controlled state Senate’s audit of ballots in the 2020 presidential election.

Pro-Trump members of the Oath Keepers militia and Three Percenters also attended the insurrection. PRA said before the insurrection that militias’ “near lockstep support for Trump” could fashion them into a pro-Trump, anti-democratic paramilitary.

Moon leads his own group known as the Peace Police Peace Militia and trains followers in deadly force. Its political positions – including Patriot movement talking points about smaller government and local sovereignty – align with the broader antigovernment movement.

“They are organization with connections and significant power and able to play a pivotal role as an armed faction in the ongoing effort to destabilize democracy,” Clarkson said.

The speakers list also shows Rod of Iron’s reach into the Christian Right, in spite of its theological foundation.

The Sanctuary church is an offshoot of the Unification Church, which Moon’s father, Sun Myung Moon, founded in 1954. That church is based on unorthodox interpretations of Biblical texts. Sun Myung believed Christ did not complete his role as the Messiah because he died without starting a family, a necessary part of humanity’s path to salvation.

Sun Myung said Jesus passed him the role of savior. He married his second wife, Hak Ja Han, in 1960. Unification Church members refer to them as the “True Parents” who will redeem humanity.

Sun Myung chose Sean as his successor in 2010, two years before his death. Moon separated from the main church in 2012 over disagreements with his mother, Hak Ja Han, who took leadership of the Unification Church. However, Moon still holds his father as a returned Messiah.

Janja Lalich, a cult expert and professor emeritus of California State University, Chico, told Hatewatch she considers the Sanctuary Church “a cult” and Rod of Iron Ministries a “troublesome movement.”

That has not stopped conservative Christian pastors from associating with Moon. Fisher and Haskell are both pastors at churches that hold Christ as the Messiah.

They call for a revival of the “Black Robed Regiment,” a group of New England pastors who fought the British in the American Revolution. The calls mirror present-day antigovernment extremist remarks about tyrannical government.

Fisher’s biography on the Rod of Iron website calls the original Black Robed Regiment “Patriot Pastors … who preached the biblical principles of liberty and government.”

Moon supports the regiment and wears a Black Robed Regiment patch on his vest.

Haskell’s biography says, “Our American Revolution would have never happened if it were not for the pastors in New England.”

The mixture of Christian pastors and far-right, antigovernment groups under the Rod of Iron banner “is disturbing,” said Jonathan Den Hartog, a scholar who specializes in American political and religious history and serves as chair of the history department at Samford University, a private Christian university in Birmingham, Alabama.

Further, stories about the Black Robed Regiment have little grounding in reality, according to Den Hartog.

“There was no such thing as an official ‘Black Robe Regiment’ in the revolution. … There were individual pastors who were involved in various ways,” he told Hatewatch.

There were some who preached in favor of war, Den Hartog said. Still, pastors of the revolutionary era gave few sermons in direct opposition to the British, and apart from those, “There aren’t any other calls for violence,” Den Hartog explained. “In fact, it’s the exact opposite, that the solidarity in opposition should remain relatively peaceful.”

A federal grand jury indicted Bundy on 16 counts related to the 41-day standoff in 2016, including conspiracy to commit an offense against the United States. A jury found him not guilty on all counts on Oct. 27, 2016. The jury’s decision shocked court watchers.

At least one group scheduled to appear at the festival regularly participates in violence. Patriot Prayer – which considers itself a Christian group – regularly planned protests in the Pacific Northwest that devolved into clashes with left-wing counterprotesters. 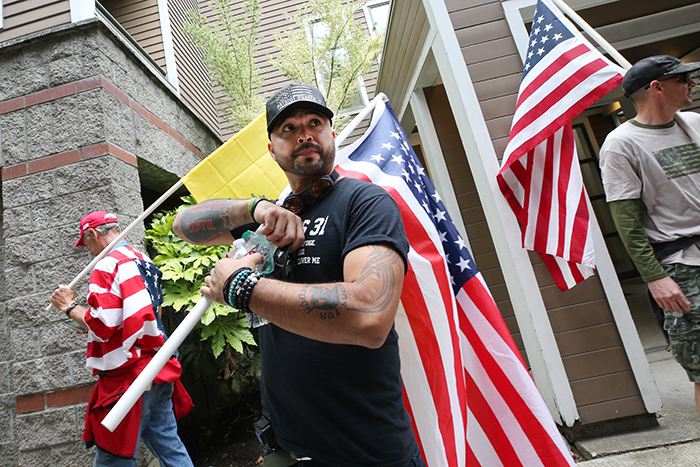 Gibson, the group’s leader, has said, “Everyone should be carrying around guns at all times.” Reggie Axtell, a Patriot Prayer associate, threatened Portland Mayor Ted Wheeler, saying, “I promise you this, Ted Wheeler: I’m coming for you, you little punk.” Skylor Jernigan, an attendee of several Patriot Prayer events, made threats toward antifa on a Facebook video: “You’re gonna be getting knives put into your throat. You’re going to be getting bullets put into your head.”

Moon claims his militia and arms are only for self-defense.

But Den Hartog expressed concern over Rod of Iron’s armed training, along with the other speakers at the festival, given their antigovernment beliefs.

Hatewatch sent a request for comment to the Sanctuary Church. Regis Hanna, media coordinator for the Freedom Festival, responded.

Hanna said festival speakers were “PRO-democracy.” Regarding concerns about Moon and attendees attending the Jan. 6 protest, Hanna said the actions of thousands of rioters “should not reflect poorly on those who attended and behaved in a respectful, peaceful and honorable manner.”

Hanna declined to comment on accusations that the Sanctuary Church is a cult.

Pastors Fisher and Haskell did not respond to Hatewatch’s request for comment, sent via email and through the website of the church where Haskell preaches.