The founder of the controversial, hard right-linked facial recognition company Clearview AI sought to recruit the New York Police Department to endorse their services to an anti-child abuse non-profit, Hatewatch has learned.

Hatewatch reviewed a trove of emails, first reported on by Buzzfeed, that detailed the relationship between the NYPD and Clearview AI. Clearview AI founder Ton-That put the NYPD and the non-profit group Thorn in contact after meetings with Ashton Kutcher, Thorn’s cofounder. Kutcher and Ton-That discussed possible investment, according to a former associate of Ton-That who spoke to Hatewatch. 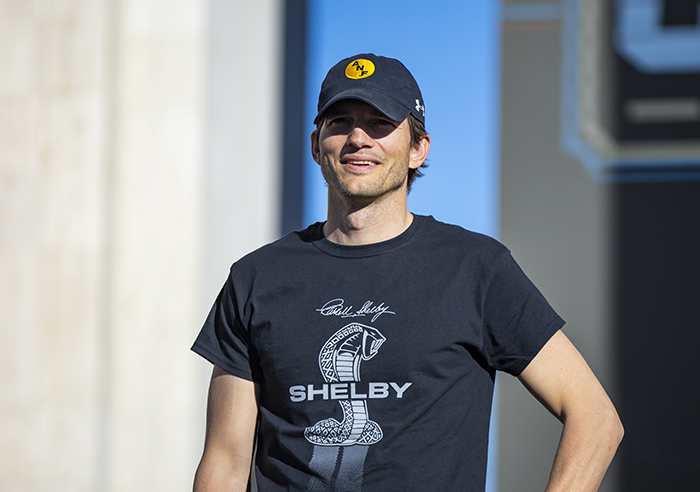 Ton-That sent the email to NYPD Lt. Felix Rivera and a person whose name and email were redacted by the NYPD’s Records Access Office.

A source close to Thorn confirmed that someone introduced Thorn and Clearview AI in 2019. Demi Moore and Kutcher founded Thorn in 2012. Thorn uses facial recognition technology for its Spotlight program, which is designed to help law enforcement identify victims of child sex trafficking. Thorn claims officers in “all 50 states and Canada” use Spotlight.

The introduction “went nowhere,” the source told Hatewatch in a call. There “were concerns with how that technology was deployed, and there was no interest in working with Clearview AI.” Still, the email further demonstrates Clearview AI’s ambitions to integrate itself in law enforcement operations across the U.S.

It is unclear if Rivera responded to Ton-That’s email. Thorn no longer has emails related to the introduction, according to the source, who declined to elaborate. Hatewatch requested further emails from the NYPD, but a records officer said there were no more emails to release.

Hatewatch emailed an NYPD spokesperson for a comment on the email. The spokesperson referred Hatewatch to its policy on facial recognition technology adopted in March 2020 and said their “previous practices did not authorize the use of services such as Clearview AI nor did they specifically prohibit it.”

Ton-That responded to Hatewatch’s request for comment via email, saying the “questions relate to old assertions regarding myself and my company. There are factual inaccuracies and these questions are irrelevant with regard to the myriad crimes we have assisted law enforcement in solving over the years.”

Ton-That did not respond to a follow-up request asking him to point out the purported factual inaccuracies in Hatewatch’s reporting.

Clearview has links to the authoritarian hard right, and Ton-That associates with white supremacists, as HuffPost previously reported. Privacy experts have raised alarm about the company because it amassed a reservoir of over 3 billion images by scraping photos from the web, without the consent of those photographed.

Research shows facial recognition technology is prone to racial bias. One study found it produces “higher rates of false positives for [Asian, Indigenous and Black people] at a factor of “10 to 100 times,” depending on the technology.

Hatewatch and others have documented Johnson’s activism in detail. An associate of reactionary billionaire Peter Thiel, he has repeatedly collaborated with white supremacists and helped amplify a Russian intelligence-backed plot to sway the French elections in May 2017 through his now-defunct website GotNews.

Johnson said in the messages he hired Ton-That to create facial recognition software and that the software could be used to “identify every illegal alien in the country.”

Johnson confirmed to Hatewatch that he views himself as a co-founder of Clearview AI. Ton-That has denied this. Johnson, who challenges his designation as an extremist, also told Hatewatch that Ton-That met with Kutcher in early 2019 about a possible investment in the company. Johnson was “against the meetings,” which he claimed led to Ton-That introducing Thorn and the NYPD.

Clearview AI began seeking funding from investors in 2018,The New York Times reported. The company secured an initial seed investment of $1 million in July 2018 from backers including “Thiel, the venture capitalist David Scalzo and Hal Lambert.” Lambert is the creator of MAGA ETF, an investment fund that tracks companies aligned with Republican beliefs.

Investors and Schwartz’s friends had versions of Clearview AI on their phone in 2018, according to The New York Times.

Kutcher referenced a facial recognition “beta app” on his phone during an appearance on YouTube program “Hot Ones” that premiered Sept. 26, 2019. He called the app “terrifying.”

Hatewatch contacted Kutcher’s publicist and Sound Ventures for comment on the alleged meeting with Ton-That. Neither responded. Sound Ventures denied it invested in Clearview AI to Business Insider in 2020.

Hatewatch attempted and failed to find up-to-date contact information for A-Grade Investment. Thorn did not respond to a follow-up request for comment on Johnson’s claims.

Clearview AI has ingrained itself in law enforcement culture by offering trials to departments and bureaus from local to federal levels. The FBI agreed to pay Clearview AI $18,000 for a licensing contract on Dec. 31, 2021, according to public records. The Army, Justice Department and Immigration and Customs Enforcement (ICE) have also signed contracts with Ton-That’s company.

Schwartz, Oct. 17, 2018, 5:55 p.m. ET: “Hi Inspector Flanagan, A pleasure meeting you. My partner, Hoan, and I would very much like to meet with you on our facial-recognition app, as Greg suggested. I am personally highly committed to the success of the NYPD as I served as Mayor Giuliani's Senior Advisor and introduced him to [Bratton] and [Maple]. Please let me if there's a date that's convenient for you.”

Schwartz, Oct. 19, 2018, 08:56 a.m. ET: Good Morning Inspector Flanagan. Just wanted to follow up on your kind email from yesterday regarding a meeting on Oct. 23. Hoan and I are free anytime that day between 10:45 am and 4 pm. What works for you? Look forward to getting together.

Emails show Ton-That visited NYPD at least three more times before Ton-That signed a contract for an NYPD trial of Clearview AI that ran from December 2018 to March 2019.

Gergar, Dec. 17, 2019, 9:09 a.m. ET: Hi! I’m a detective with the NYPD and on a Homeland Security Investigations task force where I conduct mostly child pornography and pedophile investigations. Other members of my team investigate a wide variety of other crimes. I was wondering what I need to do to get a trial version of clearview? We would love to test it out, if possible. You can reach me at 914-[redacted], also. Thanks so much!

McCarthy, Jan. 22, 2020, 2:48 p.m. ET: Hi, I am hoping to obtain access to Clearview, the facial recognition program. The program assisted to identify a subject of a case that we are currently working on. Thank you in advance.

The NYPD spokesperson told Hatewatch, “A facial recognition match is merely a lead; no one has ever been arrested solely on the bases of a computer match alone.”

Nora Benavidez, senior counsel and director of digital justice and civil rights at advocacy organization Free Press, responded to Hatewatch’s request for comment on the email and Clearview AI’s relationship with the NYPD by saying it “was troubling from the start.”