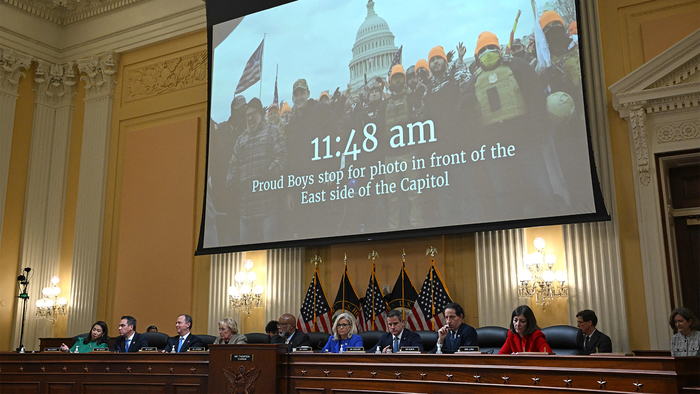 The Jan. 6 panel, formally called the U.S. House Select Committee to Investigate the January 6th Attack on the United States Capitol, presented video and testimony regarding the alleged plans of violent cooperation in which the Proud Boys – one of the most violent hard-right groups in the U.S. at the time of the insurrection – and the antigovernment extremist Oath Keepers engaged.

Their goal was to use force to stop the peaceful transfer of power, allowing Trump to remain president despite his election loss, according to the Jan. 6 committee.

Committee chair Rep. Bennie Thompson said the two extremist groups came to Washington, D.C., with “the encouragement of the president of the United States.” Committee vice chair Rep. Liz Cheney said Trump “summoned the mob … and lit the flame” that caused the violence.

The committee claimed extremists saw Trump’s Dec. 19, 2020, tweet that encouraged followers to attend a “Stop the Steal” rally in D.C. the following Jan. 6 as a “call to arms.”

Proud Boy Henry “Enrique” Tarrio started a “Ministry of Self Defense” chat for the day, according to the Justice Department’s superseding indictment. The Oath Keepers also began planning to violently challenge results shortly after the Nov. 3, 2020, election, the committee alleged.

The committee presented a video of Stewart Rhodes, leader of the Oath Keepers, telling prominent conspiracy theorist Alex Jones on Nov. 10, 2020, “It’s either President Trump is encouraged and bolstered and strengthened to do what he must do or we wind up in a bloody fight.”

The committee also showed footage of Rhodes and Tarrio meeting in a D.C. parking lot the night before the insurrection. Tarrio said in the footage that the two groups are “fighting the same fight.”

The Justice Department claims both groups planned to occupy the Capitol. Tarrio possessed a document called “1776 Return” with plans for occupation, and the Oath Keepers planted arms in nearby Virginia in case Trump called them to act, according to court documents.

Rhodes was correct. The violence that occurred during the insurrection was bloody.

Capitol Police officer Caroline Edwards was the frontline of defense in the face of the mob. Sitting as a witness to the committee, Edwards said she “was slipping in people’s blood” after the mob “ripped the first barricade down.”

She suffered a concussion that day after slipping and hitting her head on a flight of stairs. Edwards also said she saw Capitol Police officer Brian Sicknick turn “ghostly pale” while rioters sprayed him with chemicals. Sicknick died the next day. A medical examiner ruled his death resulted from strokes unrelated to injuries sustained during the insurrection.

Four officers present on Jan. 6 have committed suicide since the insurrection. Two Trump supporters died of heart attacks and another of an overdose.

These demonstrations regularly caused violence on the streets of the Pacific Northwest, especially Portland, Oregon, where the group has worked with other extremist organizations such as Patriot Prayer, Miller explained.

Miller said the Proud Boys participation in Jan. 6 showed they are “willing to take dramatic, violent action to disrupt the democratic process and impose their political will.”

The Jan. 6 panel is presenting a case that puts Trump at the center of the plans that caused the attempted coup. A key question is whether the panel will release further details regarding cooperation or backchannels between the Proud Boys, Oath Keepers and Trump’s inner circle.

Before the hearing, Thompson, chair of the Jan. 6 committee, told CNN’s Jake Tapper that witnesses testified there was communication between the extremists and people in Trump’s orbit.

But the two extremist groups’ propensity for political violence and antigovernment thought is already widely accepted on the right, according to a poll the Southern Poverty Law Center and Tulchin Research jointly conducted.

Forty-one percent of Republicans agreed with the statement that “some violence might be necessary to protect the country from radical extremists,” according to the poll. Over half of Republicans also said they believed the country is headed towards a civil war.

The poll also found 70% of Republicans believe the government has become “tyrannical.” Partisanship is also high. Republicans ranked the Democratic Party as the “most pressing” threat to U.S. democracy, while Democrats ranked Trump and the Republicans as second and third after Russian President Vladimir Putin.

Thompson recognized the ongoing danger this mistrust of institutions posed to U.S. democracy in his opening remarks.

Thompson concluded by saying that despite partisanship, the U.S. must “confront the truth with candor, resolve and determination.”