The new issue of the SPLC Intelligence Report examines three radical-right murder sprees that left a dozen victims dead, and explores the recent standoff between heavily armed militiamen and federal agents in Nevada. 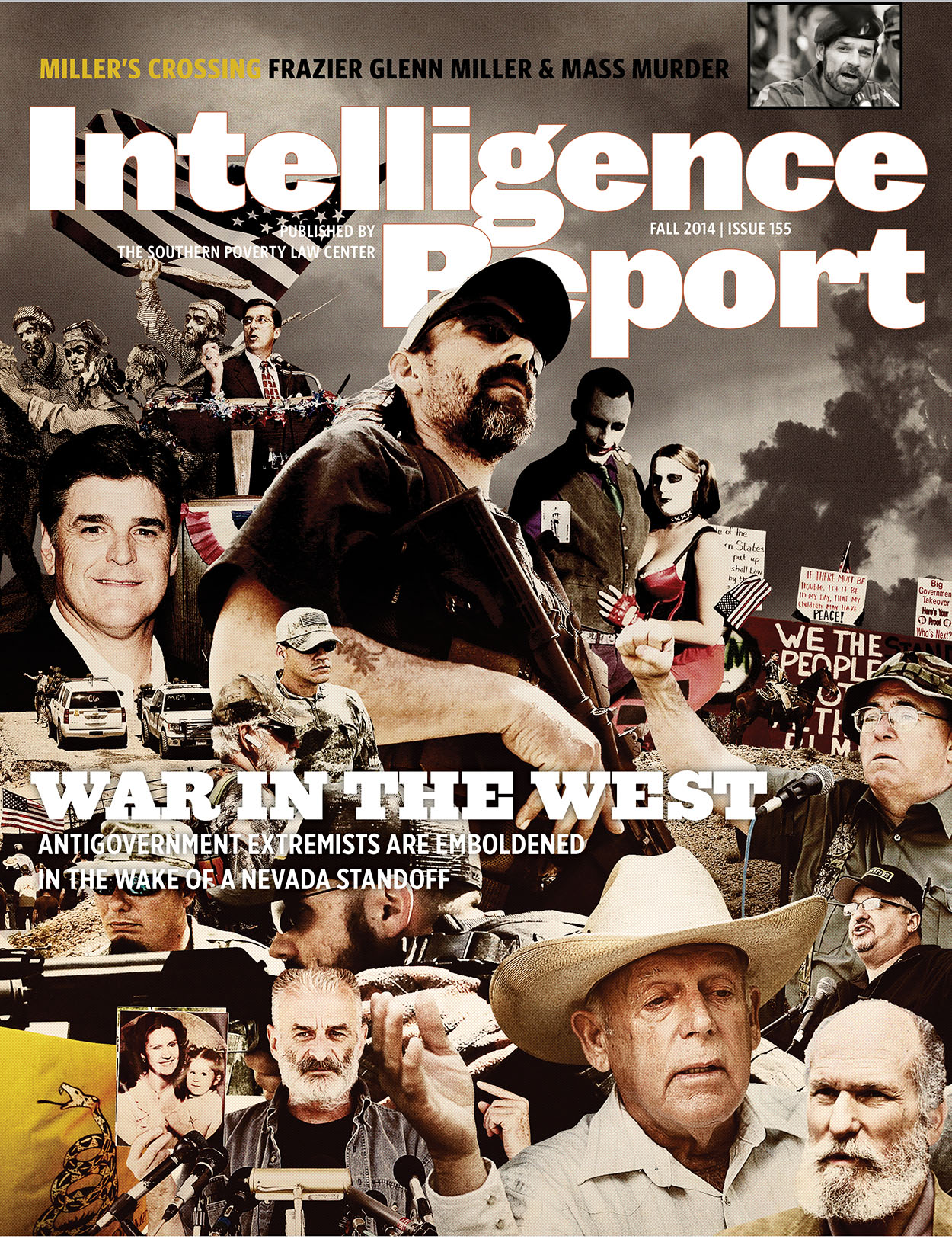 Extremists from various segments of the radical right lashed out this spring with three murder sprees that left a dozen victims dead – mass murders that are explored in the latest issue of the Southern Poverty Law Center’s Intelligence Report, released today.

The three high-profile attacks were each driven by hatred of a distinct target: the government, women and the Jewish community.

The Fall 2014 issue of the quarterly investigative journal also features a behind-the-scenes account of the standoff last April between federal agents and heavily armed militiamen at a Nevada ranch – a militia “victory” that emboldened the antigovernment movement and led to new confrontations.

“The lesson from this past spring is that the radical right poses a very real and deadly threat, one that should not be taken lightly by law enforcement or those in government who combat domestic terrorism,” said Mark Potok, senior fellow at the SPLC and editor of the Intelligence Report. “The standoff at the Bundy ranch in Nevada was a highly coordinated, military-style operation by far-right extremists that could have easily ended in a bloodbath.”

A shooting spree committed by antigovernment extremists that left three people dead in Las Vegas – including two police officers – is one of the attacks examined in “War in the West,” the account of the Nevada standoff. Witnesses say the couple who committed the murders, Jerad and Amanda Miller, shouted, “This is a revolution!” during the June 8 rampage.

The Millers had spent time at Cliven Bundy’s ranch in April, when the U.S. Bureau of Land Management backed off on its attempt to round up Bundy’s cattle to satisfy more than $1 million in grazing fees he has refused to pay.

“Miller’s Crossing” explores the shooting rampage that left three people dead at Jewish facilities in Overland Park, Kansas, in April. The suspect, Frazier Glenn Miller, spent 40 years in the white supremacist movement and was a prominent Klan leader in the 1980s. His long history on the radical right is detailed as well as the attack, which ended with Miller being whisked away in a police car as he shouted, “Heil Hilter.

“War on Women” investigates the rampage that left six people dead and 13 injured in Isla Vista, Calif., on May 23. The killer, Elliot Rodger, hated women and spent time perusing woman-bashing websites, known collectively as the “manosphere.” While Rodger was mentally ill and developed his obsessions with women over many years, it appears the manosphere reinforced his mindset, helping to justify his hatred.

“These killing sprees show that hateful rhetoric and propaganda don’t just disappear into a vacuum, but can fuel deadly rage,” Potok said.