1980 – The U.S. Supreme Court vacates the convictions of 11 death row inmates in Alabama after affirming the SPLC’s claim in Beck v. Alabama that the state’s death penalty statute is unconstitutional.

1981 – The SPLC creates Klanwatch to monitor Ku Klux Klan activity across the country. It is renamed the Intelligence Project in 1998 after it expands its mission and begins monitoring other hate groups.

1981 – A Klan terror campaign against Vietnamese fishermen in Texas ends and Klan paramilitary training bases are shut down as part of an SPLC lawsuit, Vietnamese Fishermen’s Association v. Knights of the Ku Klux Klan. 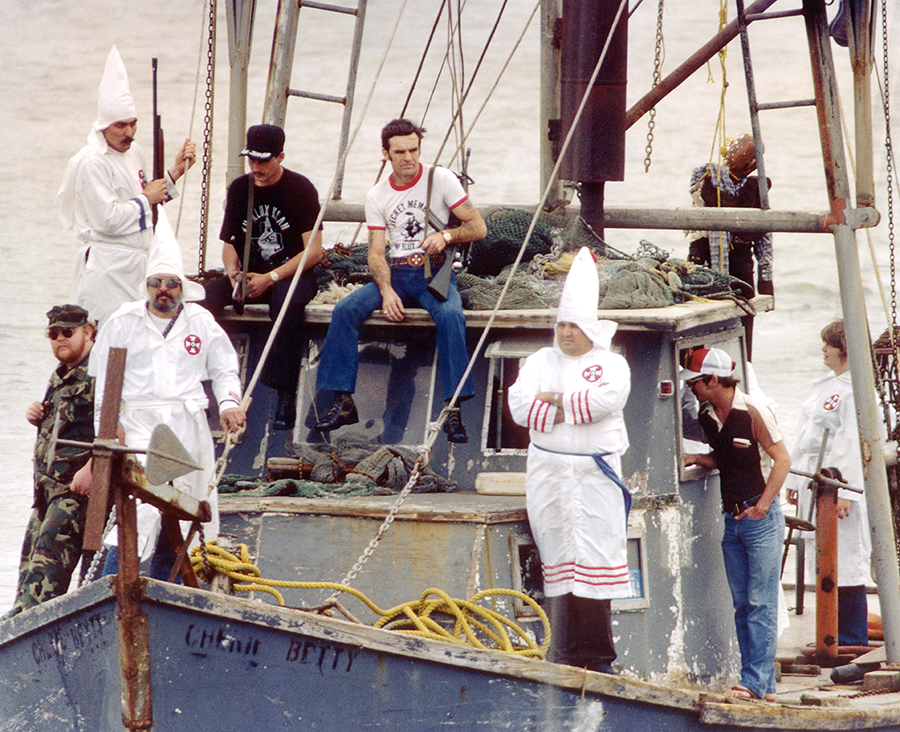 A Klan terror campaign against Vietnamese fishermen in Texas ends and Klan paramilitary training bases are shut down as part of an SPLC lawsuit.

1982 – The SPLC wins the release of Johnny Ross, who became the nation’s youngest death row inmate at age 16 after being wrongly convicted of the rape of a white woman in Louisiana in 1975.

1983 – Melted clock from SPLC office 1983 –Klansmen burn the SPLC offices on July 28, 1983. More than a year after the fire, three men are arrested: Tommy Downs and Charles Bailey, members of the Knights of the Ku Klux Klan, and Joe Garner, a national officer of the group. They are charged with arson and possession of explosives. All three plead guilty and are sentenced to prison.

1984 – A paramilitary unit of the Klan is enjoined from operating as a result of an SPLC lawsuit brought on behalf of Alabama citizens against Klan leader Bill Wilkinson and the Invisible Empire Klan.

1984 – Kentucky’s tax system, which had virtually exempted un-mined coal from taxation, is reformed after the SPLC files Nowak v. Foster, providing a boost for public schools.

1985 – A paramilitary Klan group in North Carolina is ordered to stop training and operating. The SPLC brought the case, Person v. Carolina Knights of the KKK, after the group began terrorizing residents.

1987 – The SPLC wins an historic $7 million verdict against the United Klans of America for the 1981 lynching of Michael Donald in Mobile, Ala. It marks the end of the notorious United Klans, which was responsible for the deadly bombing of Birmingham’s Sixteenth Street Baptist Church and the murder of civil rights activist Viola Liuzzo in the 1960s.

1987 – Alabama state troopers must integrate after the U.S. Supreme Court rules in favor of the SPLC in its lawsuit, Paradise v. Allen.

1988 – SPLC appeal wins release of Roy Patterson from prison in Georgia, 13 years after he was wrongfully convicted of murdering a police officer. Patterson acted in self-defense when a state trooper and a policeman attacked him and his wife and child.

1988 – A federal jury assesses nearly $1 million in damages against two Klan groups and 11 followers responsible for an attack on peaceful marchers in Forsyth County, Ga. The SPLC sued on behalf of the marchers in McKinney v. Southern White Knights. The Invisible Empire was eventually forced to pay damages and disband.

1989 – The SPLC wins a settlement against members of the Invisible Empire Klan who attacked peaceful civil rights marchers with bats, ax handles and guns in Decatur, Ala., in 1979. The Klansmen must attend a race relations course taught by the leaders of the group they attacked.