The number of hate groups operating in America rose again last year, capping a 48% increase since 2000 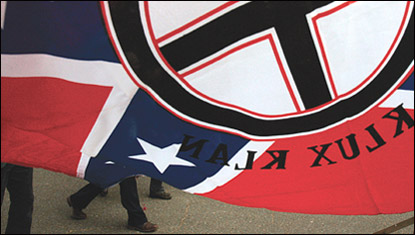 The end of 2007 brought to a close another year marked by staggering levels of racist hate in America. Even as several major hate groups struggled to survive, other new groups appeared, and the radical right as a whole appeared to grow.

The latest annual count by the Southern Poverty Law Center (SPLC) found that the number of hate groups operating in America rose to 888 last year, up 5% from 844 groups in 2006. That capped an increase of 48% since 2000 — a hike from 602 groups attributable to the exploitation by hate groups of the continuing debate about immigration. And it comes on top of some 300 other anti-immigration groups, about half listed by SPLC as "nativist extremist," formed in the last three years.

At the same time, FBI statistics suggested that there was a 35% rise in hate crimes against Latinos between 2003 and 2006. Experts believe that such crimes are typically carried out by people who think they are attacking immigrants.

Although there were some signs that nativist hatred may be starting to abate, you wouldn't know that by listening to the furious rants of many groups. "America is being destroyed from within by a modern version of Genghis Khan's army," the Emigration Party of Nevada, listed by the SPLC as a hate group, said. The group's leader, Don Pauly, wants to send government "sniper teams" to the border and forcibly sterilize Mexican women after a first child.

"If the Jew government waits, and hell breaks out here in the USA, our citizens will not be asking to see any documentation," added Michael Blevins, the Florida state leader of the neo-Nazi American National Socialist Workers Party. "They will go after anyone they think an illegal alien based on race first."

The growth of these groups is being helped by conspiracy theories and other racist propaganda about immigrants that is being spread by mainstream politicians and pundits. While theories about a secret plan to merge Mexico, Canada and United States into a single country began in radical groups, for instance, many key figures have endorsed them. Indeed, 18 states' houses of representatives have now passed resolutions opposing the "North American Union" — an entity that does not exist and has never been planned, but nonetheless inhabits nativists' nightmares.

Promoting such theories, coupled with a history of ties to white supremacist groups and ideology, is what caused the Southern Poverty Law Center to add a major anti-immigration group, the Federation for American Immigration Reform (FAIR), to its list of hate groups last year. FAIR has also promulgated the theory that Mexico is involved in a secret plot to "reconquer" the American Southwest.

"You need to understand that WE ARE AT WAR RIGHT HERE IN AMERICA," is the way another nativist group, the Nebraska-based United Citizens of America, put it. "We are being invaded by a foreign country and we are being betrayed from within. Our government, from top to bottom, is being controlled by global elites. They have infiltrated our government at ALL levels."

Here's a more detailed look at several sectors of the radical right:

NEO-NAZIS
Neo-Nazi groups
While the number of neo-Nazi group chapters increased over the course of 2007 from 191 to 207, this rise was largely due to a shake-up within the National Socialist Movement (NSM). Although the NSM remains the largest neo-Nazi organization in the country, with 73 chapters in 34 states (down from 81 chapters in 36 states in late 2006), it suffered a mass exodus of high-profile members last year, most of whom quickly either founded new chapters of rival neo-Nazi groups or established their own new spin-offs.

Bowles, along with another disgruntled NSM officer, Nick Chappell, formed a new group, the National Socialist Order of America, based out of The Redneck Shop, a hate memorabilia store in Laurens, S.C., that is owned by Chappell and had been the site of many NSM gatherings.

Ramm launched a website, "NSM Watch," where he posted a list of 111 ex-NSM members who, according to Ramm, had either resigned or been kicked out. NSM "commander" Jeff Schoep countered that he was merely pruning "troublemakers and drama queens." Then, last November, Schoep issued an open letter to NSM members in which he branded Ramm and other defectors "oath breakers and race traitors" and accused them of "working for the enemy."

The following month, Schoep announced that he was leaving his common-law wife and six children in Minneapolis to move in with a new girlfriend in Detroit, where he was relocating NSM's national headquarters. Rumors abound in the neo-Nazi movement that Schoep's new flame is non-white, and that he's using NSM money to support her in a supposedly extravagant lifestyle.

"In 2006 NSM did over $110,000 in sales, and … current projections for [2007] are around $180,000," Ramm claimed on his website late last year. "NSM Records [the group's hate rock music company] is a business that doesn't report total profits to the members, who are expected to just smile and hope the Commander is spending the money wisely."

The greatest beneficiary of the NSM's internal strife was the American National Socialist Workers Party (ANSWP), a neo-Nazi group led by another former NSM stalwart, neo-Nazi gadfly Bill White. White boasted that he's accepting "the best of the best" NSM castaways and, indeed, ANSWP chapters more than doubled from 13 to 30 last year.

Two former powerhouses of the neo-Nazi scene, Aryan Nations and the National Alliance, were in states of more or less suspended animation last year. Aryan Nations still exists but is barely active. In early 2007, two of the group's leaders, Clark Patterson and Jonathan Williams, quit to form a new Christian Identity group called the United Church of YHVH after complaining that Aryan Nations had forgotten its roots in Identity, a theology that says people of color are soulless non-humans and Jews are biologically descended from Satan.

The National Alliance, a West Virginia-based group that has declined precipitously since the death of its founder in 2002, showed signs of life last May when it held a Holocaust denial conference that drew 75 attendees, nearly three times as many people as have attended Alliance "leadership conferences" in recent years. But in August, the Alliance suffered a major setback when Chairman Shaun Walker and two other Alliance members were convicted of federal civil rights violations in a string of three racially motivated assaults in Salt Lake City in 2002 and 2003. Walker was sentenced to 87 months in federal prison, while his underlings received shorter sentences. Former Chairman Erich Gliebe, who had stepped down amid much criticism earlier, re-assumed leadership of the troubled group amid swirling rumors of drug use and a pending divorce and custody battle with his estranged wife, former stripper Erica Gliebe — a woman who now calls herself "Hollycast," an apparent sarcastic reference to the Holocaust.

Finally, the National Vanguard looks to be all but finished. Its leader, Kevin Alfred Strom, pleaded guilty to possessing child pornography and is facing up to 10 years in prison when he is sentenced in April.

RACIST SKINHEADS
Racist Skinhead groups
Racist skinhead gangs, or "crews," are unstable and often transient by nature, making them difficult to track. However, over the course of 2007, it was possible to identify 90 racist skinhead outfits operating in the United States, up from 78 in 2006. Five of the new chapters are reactivated or recently established divisions of Hammerskin Nation (HSN), a once-mighty coalition of skinhead crews whose power waned earlier in this decade but is now clearly resurging. In addition to the five new domestic chapters, HSN also now claims active crews in at least 10 foreign countries, including Australia, Hungary and Switzerland.

Last September, the leaders of HSN and the Vinlander Social Club, a rival skinhead coalition in the Midwest, unexpectedly announced they had reached a peace agreement, ending a blood feud of nearly 10 years. The following month, Hammerskin Nation celebrated its 20th anniversary at Hammerfest 2007, a hate rock festival held near Portland, Ore., and hosted by the Northwest Hammerskins, a regional affiliate of HSN. The Portland-based, neo-Nazi skinhead gang Volksfront provided security. Members of the neo-Nazi group White Revolution and the white nationalist organization Women for Aryan Unity were in attendance. One of the speakers was Michael Lawrence, a prominent member of the Confederate Hammerskins, another HSN affiliate, and the founder of the Christian Guard, a major Christian Identity organization.

KU KLUX KLAN
Ku Klux Klan groups
Although most Ku Klux Klan factions continued to exploit the roiling national immigration debate in 2007 by holding anti-"illegal alien" rallies (rather than their more typical "anti-black crime" fare), last year was a relatively quiet one for the KKK. The number of Klan chapters dropped to 155 last year from 165 in 2006, marking the second straight year of decline after five years of rapid growth.

The Imperial Klans of America (IKA), meanwhile, declined from 23 chapters in 2006 to just 16 last year as a case filed last year by the Southern Poverty Law Center against IKA chief Ron Edwards, five followers and the group itself neared trial. The lawsuit seeks damages for a boy who was attacked and severely beaten during an IKA recruiting drive at a Kentucky county fair.

BLACK SEPARATISTS
Black Separatist groups
The death last May of black separatist cult leader Yahweh ben Yahweh (born Hulon Mitchell) coincided with the ongoing rebirth of his Nation of Yahweh, a notorious religious sect that has preached violence against "white devils." Nearly 500 Nation of Yahweh members, many of them conspicuously flaunting material wealth in the form of expensive cars and jewelry, attended the funeral of Yahweh ben Yahweh, who shortly before his death was released from parole after serving 11 years of an 18-year sentence on federal conspiracy charges related to 14 murders committed in South Florida in the 1980s.

Formerly moribund Yahweh websites flared with activity following the funeral. In Rochester, N.Y., a white man who started a nonprofit food pantry for the homeless said that a Yahweh member who joined the nonprofit's board in 2004 orchestrated a campaign to push him out of the organization shortly after she returned from the funeral. The man says that he now fears for his life and that the Nation of Yahweh has taken over the building housing the organization.

The New Black Panther Party, a racist group unrelated to the original Black Panthers, was also highly active in 2007. Although Chairman Malik Zulu Shabazz was barred from entering Canada last May because of his radical ideology, Shabazz did successfully organize a major rally for a black hate crime victim in West Virginia, made a public show of force in Jena, La., and held an Atlanta "Black Power Summit" last October that was attended by about 100 party members from across the country.

GENERAL HATE
General Hate groups
Anti-Gay groups
Anti-Immigrant groups
Racist Music groups
Other events of importance on the radical right included the emergence of Watchmen on the Walls, an international and incredibly virulent anti-gay organization with strong ties to Latvia. The organization has gained a foothold in the United States among Russian-speaking Slavic immigrants on the West Coast, holding a major conference in Lynnwood, Wash., in October.

Also last year, the hate group list's only campus outfit, the Michigan State University chapter of Young Americans for Freedom, which was added in 2006 after the group sponsored a "Catch an Illegal Immigrant Day" contest and put out a manifesto calling for white, male control of the MSU student government, continued to promote hate by hosting a series of lectures by extremists such as Nick Griffin. Griffin is a Holocaust denier and the head of the whites-only British National Party, that drew skinheads and other white supremacists to the MSU campus.