They may seem like unrelated events, but the tsunami in Japan and the uprisings in the Arab world are both signs of the approaching apocalypse. So says Nation of Islam (NOI) leader Louis Farrakhan, who also prophesies the imminent arrival of giant spaceships that will avenge black suffering by whisking away the true believers and destroying the rest of humanity.

"Now you may laugh, but in a few days, something is going to wipe the smile and the laugh from your face," Farrakhan, who heads the nation's largest black hate group, warned on March 31. President Obama's decision to intervene militarily on the side of Libyan rebels trying to topple dictator Muammar Qaddafi will only hasten the reckoning, Farrakhan said.

The black nationalist leader has long considered Qaddafi a friend and ally. In 1972, the longtime Libyan strongman loaned $3 million to the NOI's leadership to buy the group's Chicago headquarters. In 1985, he loaned another $5 million to NOI to launch a line of beauty products. And in 1996, Qaddafi reportedly tried to give NOI $1 billion. The donation was fought by the Clinton Administration and apparently never made. 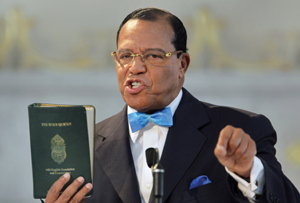 End times warning: Louis Farrakhan of the Nation of Islam, which has received millions in loans from the Libyan government, said President Obama’s attempts to topple Muammar Qaddafi will hasten the arrival of spaceships that will destroy all white people.

NOI theology, a heterodox and racist version of Islam that describes white people as intrinsically evil, has it that just before the end of times, believers will be transported in small spaceships called "Baby Wheels" to a giant "Mother Wheel," where they will live. Other divine ships will bomb those left behind — principally, white people — to smithereens.

One of the ways Farrakhan knows the end time is near: Governments around the world — but not the United States — are releasing files on UFOs, "informing their people of the reality of what is above their heads."

"Who do you think then that you're dealing with, if you're the best in the world but you're thousands of years behind the technology on those wheels? I'm here to tell you, you are dealing with God. You have no weapon that can handle what is already prepared to take you out."

Although Farrakhan earlier issued warnings to President Obama that he should not intervene in the Libyan conflict, he said responsibility for the U.S. involvement doesn't rest entirely with the nation's first black president (who, he said, he loves like a brother).

"The stupid mistake that we make is to think that the president is the supreme power," Farrakhan said. "Never was. Money is the power in America. … All of you know what I'm talking about, Zionist control of the government of the United States of America." 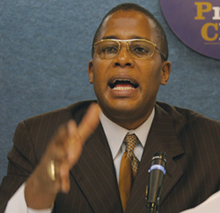 In a much less forgiving mood was Malik Zulu Shabazz, leader of the New Black Panther Party (NBPP), who once was an NOI member and often aligns himself with Farrakhan. The Southern Poverty Law Center lists both NOI and NBPP as hate groups.

"Only thing you see in Libya is just a big case of police brutality. We see the way they [police] team up on us and run us down all the time. Sometimes, it's a n----- police chief that's in the lead. This time, it's a n----- police chief in the lead named Barack Obama. But it makes no difference, the black man is on the run, named Qaddafi. We pray for his safety and that he survives."