Two of the three border vigilantes charged in the 2009 home-invasion murders of a Latino man and his 9-year-old daughter in Arivaca, Ariz., have been sentenced to death.

In February, an Arizona jury sentenced Shawna Forde to death for the slayings of Raul Flores and his daughter, Brisenia Flores. A second suspect, Jason "Gunny" Bush, was sentenced to death in March.

Forde, 43, founded and headed Minuteman American Defense (MAD), one of hundreds of vigilante citizen border-patrol groups that have sprung up since 2005. According to prosecutors, she, Bush and local MAD member Albert Robert Gaxiola dressed as law enforcement officers and invaded the victims' trailer, where they expected to find drugs and cash to fund MAD's operations (they did not). On Forde's order, Bush shot Flores, his wife, Gina Gonzalez, and their daughter, who was sleeping on a couch with her puppy. Gonzalez, who survived, managed to return fire with her own gun and drive off the attackers. "Oh my God," she can be heard shouting on a 911 tape. "I can't believe they killed my family." 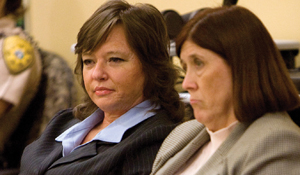 Bush, 36, was found guilty in late March. He confessed to the shootings the day he was arrested but was not offered a plea deal and chose to plead not guilty. Acknowledging that the evidence of his guilt was "overwhelming," his attorneys declined to offer a defense, focusing instead on sparing him from the death penalty.

Bush is said to have longstanding connections with white supremacist groups. He has been charged with two 1997 homicides in his home state of Washington: second-degree murder for stabbing a homeless Mexican man to death and first-degree murder for killing a white man who Bush allegedly called a "race traitor." No trial has been set for those crimes.

Gaxiola, 44, the other alleged accomplice, was to stand trial in June.

Forde was once something of a starlet in vigilante circles, working with vigilante leaders like Chris Simcox, founder of the now-dissolved Minuteman Civil Defense Corps, and Jim Gilchrist, founder of the Minuteman Project, and appearing at events with American Border Patrol head Glenn Spencer.

Most of her colleagues disavowed Forde the moment her arrest was announced. But there were exceptions. Laine Lawless, the eccentric director of a hate group called Border Guardians, continued to champion Forde and repeatedly disrupted court proceedings. J.T. Ready, the neo-Nazi founder of numerous border vigilante groups and a friend of immigrant-bashing Arizona State Senate President Russell Pearce, didn't even bother to suggest that Forde was innocent.

"I would like to personally thank Shawna Forde for doing the job the U.S. government won't do itself," Ready wrote in July 2009. "Instead of getting locks and cold steel bars, Shawna should be presented with the key to the city where she took out the trash."