Paul Watson, the swashbuckling founder of the radical animal rights group Sea Shepherd Conservation Society who has become an international fugitive since Interpol issued a request for his arrest this summer, has no intention of giving up easily.

Paul Watson, the swashbuckling founder of the radical animal rights group Sea Shepherd Conservation Society who has become an international fugitive since Interpol issued a request for his arrest this summer, has no intention of giving up easily.

In an August commentary written for the British newspaper The Guardian — a sympathetic venue that in 2008 named him one of “50 people who could save the planet” — Watson said he would stay on the open seas as long as possible to avoid being captured and sent to Costa Rica to face trial. Since then, Interpol has issued another arrest request for him based on a complaint from Japan.

Watson was arrested in Germany last spring at the request of Costa Rica, which sought to try him in connection with a 2002 altercation between a Sea Shepherd ship and a vessel that was allegedly shark finning, an often-illegal practice that kills sharks for nothing more than their fins. The finners’ crew said Watson tried to kill them. In July, Watson jumped bail and fled Germany, which was about to rule on Costa Rica’s extradition request, leading Interpol to request his arrest on behalf of the Central American country. 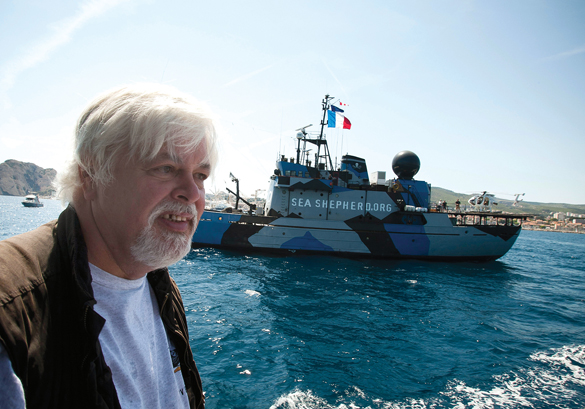 The Sea Shepherd Conservation Society has a fleet of several “anti-whaling” ships, all designed to disrupt the work of larger fishing boats. Authorities have accused Watson of ramming ships in the Antarctic in the past — an extremely dangerous maneuver on the high seas — and this year Watson has promised to return to Japanese waters to disrupt the whale season.

Watson is an aggressive self-promoter who was expelled from Greenpeace’s board of directors in 1977 because of his propensity for “direct action” — criminal violence, in the view of his many detractors. He was once convicted in Norway, in absentia, of attempting to sink a vessel there.

None of this seems to have put off Watson’s cheerleaders, who apparently see him as a romantic figure and who are not limited to the fringe of the animal rights movement. Since 2008, for instance, he and his group have been lionized on television, courtesy of Animal Planet’s “Whale Wars” reality series, which was renewed in late 2011 for the current television season.