A far-right propagandist who published a book questioning the validity of President Obama’s birth certificate now has a new conspiracy theory about the president.

The conspiracy theories about the real nature of our first black president have been almost literally endless. Barack Hussein Obama, the critics said, is a Kenyan, a Marxist, a Muslim Manchurian candidate seeking to destroy America. An entire industry sprang up to support the idea that the president is not American.

Now, with all of that thoroughly debunked in the minds of most sane people, the Tea Parties’ favorite conspiracy theorist — “birther” propagandist Jerome Corsi, who also was the chief activist behind the “Swift boating” of one-time presidential candidate John Kerry — is pushing a new and different theory. And this one doesn’t rely on Corsi’s dog-with-a-bone insistence that Obama is a foreigner.

The president, Corsi suggests, is gay and married to a Pakistani man.

But, hey, that’s not a criticism. Corsi isn’t down on gay people: “The question is not to condemn Obama here for being bisexual or gay, if that’s in fact what he is, but to wonder why he’s gone to the extent of hiding it, especially when he now is supporting same-sex marriage,” he explained in a YouTube video.

The idea that Obama has a male Pakistani paramour first surfaced this summer when a blogger for We the People of the United States, an antigovernment “Patriot” website, wrote about coming across a copy of the 1990 Harvard Law Revue, a parody magazine that satirizes the Harvard Law Review, the prestigious journal Obama edited and was president of while a student. 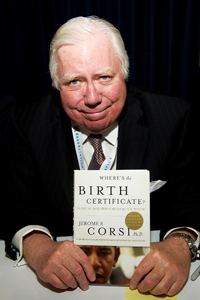 The Revue’s satirical profile of Obama points out a ring that the future president wore on his left ring finger and that was visible in many photos of him as a young man. “As far back as 1990, when he was in law school, Obama was apparently asked repeatedly about the ring on his left hand,” the We the People blogger fretted. “Sounds like he dodged the question.

That was all it took to send Corsi sniffing.

“Evidently, Obama has never explained it. He has never given any discussion of it,” the intrepid Corsi reports breathlessly on his video. “It’s like many of the factors of Obama’s life. There are hidden aspects to it, lies, mysteries, disinformation. ... Increasingly, I try to point out to people that Obama’s life reads like a classic intelligence agency disinformation operation.”

Actually, most of the real disinformation has come from Corsi, who wrote an entire book claiming Obama’s Hawaiian birth certificate is a forgery and who works as a “reporter” for WorldNetDaily, a conspiracist website that once claimed in a multi-part series that eating soy products causes homosexuality. Even Obama’s 2011 reluctant release of his “long form” birth certificate failed to convince Corsi or the other deep thinkers at WorldNetDaily that the president was, in fact, American.

Now comes Corsi with his latest claims about Obama. Let’s hope, this time, that the president doesn’t feel obliged to try to prove him wrong.