The plot that authorities say developed on an Army base in Georgia this year might have been taken as a joke had not the conspirators allegedly murdered a young couple they feared might talk and acquired an $87,000 cache of weapons. At least 10 people are implicated in a group that appears motivated by far-right ideology.

The delusional but deadly plot to overthrow the United States government started out as “just guy stuff,” as one of the accused conspirators recently described it in court: an all-American band of brothers from the Fort Stewart Army base getting their kicks by harmlessly shooting off guns under the stars in the Georgia woods.

But soon they were buying and stockpiling more and bigger weapons. Soon they were talking about using them to wage a second American Revolution. Soon they were in way over their heads, when, faster than it takes to pull a trigger, everything fell apart in a spasm of betrayal and blood.

A couple of weeks before Christmas 2011, two young lovers — Michael Roark, 19, a recently discharged soldier who had served at Fort Stewart, and his girlfriend, Tiffany York, 17, a high school junior and photographer on the school yearbook — were lured to the woods with the promise of starlight shooting.

There, around midnight on Dec. 5, they were each shot twice in the head in an attempt by the group, prosecutors charge, to eliminate a “loose end” and keep the plot secret.

“I don’t know how it got to the point where two people got murdered,” Pfc. Michael Burnett told a Georgia courtroom in late August, confessing his role in the killings in a plea agreement to testify against his former comrades and avoid the death penalty.

“Say that again,” the judge demanded, as if he could not quite believe the plans for domestic terrorism he was hearing from the mouth of an active-duty American soldier.

“I don’t know how it got to the point where two people got murdered,” Burnett repeated.

Indeed, if not for the killings, the funerals, the devastated families and the $87,000 worth of military-grade weapons and explosives stockpiled by the group, the scheme would be laughable. Even the group’s name spoke of grandiose aspirations — Forever Enduring Always Ready, FEAR for short. 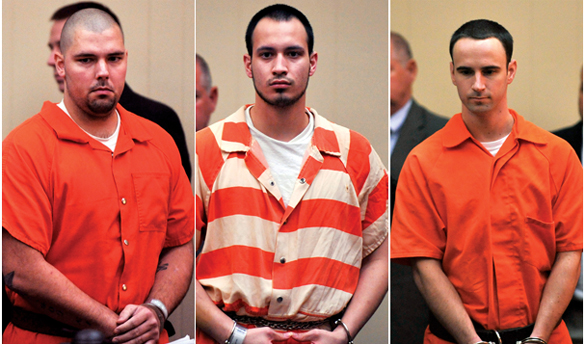 “So you talked about revolution?” the judge asked Burnett.

A prosecutor described the group as a militia of “anarchists,” a charge that sparked headlines around the country. But there appears to be little evidence, beyond a tattoo several members wore that reportedly resembles an anarchist symbol, that FEAR members were believers in a stateless society. “The United States military is many things, but a haven for an anarchist cell it is not,” said Daniel Levitas, author of The Terrorist Next Door: The Militia Movement and the Radical Right.

Mark Pitcavage of the anti-racist Anti-Defamation League (ADL) also expressed doubt that FEAR was made up of antigovernment leftists. “Anarchist militia is an oxymoron,” he said. “It’s very common for prosecutors and police to mischaracterize or very loosely characterize extremist groups. They don’t know the ideologies or the differences.” He said the ADL had researched FEAR in recent weeks and “we found nothing to suggest ties to anarchists.’’

“All signs that we found pointed to them being conservative, not extremist,” Pitcavage said. “If they did become extremists it was a sort of right-wing variety.” Or as one alleged member of FEAR, Timothy Joiner, 21, told The Associated Press, “I’m a proud Republican.”

As the Southern Poverty Law Center (SPLC) reported earlier this year, the antigovernment “Patriot” movement has experienced a resurgence, growing explosively since 2008, when President Obama was elected to office. In 2012, the SPLC identified 1,274 antigovernment Patriot groups that were active the prior year. Of these groups, 334 were militias and the remainder included “common-law” courts, publishers, ministers and citizens’ groups. At the same time, domestic terror plots have multiplied.

FEAR and Loathing in Georgia

FEAR’s grand plan, according to state prosecutors, called for a sort of military coup that included taking over Fort Stewart, home of the 3rd Infantry Divison; poisoning the apple orchards of Washington state; blowing up a fountain in Savannah, Ga.; and someday assassinating the president of the United States — all under the unlikely leadership of a bright, charismatic 20-year-old private named Isaac Aguigui, who founded the group.

Aguigui was a page at the 2008 Republican National Convention who attended the West Point preparatory school in New Jersey before being dismissed for a forbidden affair with a classmate, the female soldier he later married. In FEAR, Aguigui was the least experienced warrior. Unlike several of his older co-conspirators, he had never been deployed to a combat zone. Aguigui’s war was still just in his imagination.

But he was by far the richest. After his wife, Deirdre — an army sergeant, swimmer, runner and linguist who served a tour of duty in Iraq — died in their home on the sprawling base in July 2011 under what a prosecutor described as “highly suspicious” circumstances that are still being investigated, Aguigui received a $500,000 life insurance settlement. Prosecutors say he used that money to bankroll the group’s arsenal, including more than $30,000 worth of weapons he purchased while home in Washington state on bereavement leave in the fall of 2011. Deirdre Aguigui, 24, was nearly six months pregnant at the time of her death. Her Facebook profile photo is of a sonogram.

Aguigui, who turned 21 in April, Sgt. Anthony Peden, Pvt. Christopher Salmon and Burnett were arrested Dec. 10, 2011, just a few days after the young couple was found dead. Aguigui, Peden and Salmon have been charged in state court with murder. Prosecutors say they will seek the death penalty. Burnett was also initially charged with murder but pleaded guilty to lesser crimes in exchange for his testimony.

In September, five more men, including four former soldiers from Fort Stewart, were indicted on lesser charges connected with FEAR, including gang activity and breaking into houses and cars to help fund the group.

“I’ve heard so many bizarre rumors and tales about what’s going on,” Brett Roark, Michael Roark’s father, told the Intelligence Report. “It seems like every time you turn around, there’s another snake under a rock at Fort Stewart.”

The Army also charged the members of FEAR with a number of offenses but dropped the charges in August, saying the slain couple were civilians and were killed off base.

Salmon’s wife, Heather, herself a former soldier, has also been charged with murder in the case but does not a face death sentence. At the time of the killings, prosecutors say, she was at home, babysitting Burnett’s infant son, while Burnett allegedly accompanied Aguigui, Peden and Salmon into the woods close to midnight on Dec. 5, 2011, to take care of the “loose ends.”

“Tiffany knew these guys. She wasn’t afraid of them,” her mother, Brenda Thomas, told the Report. “I know they would go shooting and she’d go with them. She would talk about Isaac Aguigui. How he lost his wife. They were supposed to go shopping to buy him some stylish clothes. She was trying to set him up with her stepsister, who went shooting with them, too.’’

Roark had apparently been helping FEAR buy guns, and the group, according to prosecutors, was afraid he would start revealing what he knew about the antigovernment plot once he was out of the Army — and out of their reach. He planned to move home to Seattle. His girlfriend was also planning to leave Georgia. She was headed to California to live with her father. They had been dating for only a few months.

“That evening,” Aguigui and the others “decided they needed to kill them now,” said Assistant District Attorney Isabel Pauley. “There was urgency to the matter.”

Two fishermen discovered the bodies of Roark and York off a dirt road in the woods near Fort Stewart in the mid-morning of Dec. 6 in Long County, a rural stretch of the state that does not even have its own jail. Agents from the Georgia Bureau of Investigation took over the search for the killers. “They had to answer who committed these heinous murders and why,” prosecutor Pauley said. “The answer to these questions of who and why center around one man, Isaac Aguigui.”

The son of a 20-year Army veteran, Aguigui, like most of his six siblings, was homeschooled for much of his life, according to his father, Edward, 46. “We moved around a lot,” Edward Aguigui told the Report. “It just made sense rather than pull the kids out of school every two or three years, we opted to home school them.”

There were other reasons the family chose home schooling. “Maybe there was some curriculum we didn’t agree with,” he said, “like evolution versus creation. We wanted to teach them in our way.’’

For as long as he can remember, Edward Aguigui said his son wanted to be a soldier. Isaac used to volunteer at the local senior citizen center where he called out the bingo cards. He loved listening to the war stories of the old veterans.

He also loved guns. Young Aguigui got his first gun, a .22 rifle, when he was 12, but only after he took a gun safety course at his father’s insistence. As a teenager, he used to go shooting with his grandfather twice a month. “I’ve only had one weapon and that was the weapon the Army issued to me,” Edward Aguigui said. “I’ve never bought a weapon. I know what a weapon can do and don’t want to fill my house with them.”

When Aguigui came home on bereavement leave and went on a gun-buying spree at a local gun shop, father and son got into an argument. Edward Aguigui said his son initially lied to him about the guns. He said he and a buddy had been collecting them for years. “They were military grade weapons,” Edward Aguigui said. “I didn’t see them all. It looked like a lot of them.”

A concerned relative notified the authorities that young Aguigui was buying a lot of weapons. The federal agents came calling on the family. “They were asking me about Isaac,” his father said. “‘Is he stable?’ He’s never threatened us. I know that.”

Since he had done nothing illegal, Aguigui was allowed to return to Fort Stewart, where he continued to purchase weapons, sending fellow soldiers such as Burnett and Roark to buy them to avoid attention. “Isaac is a very intelligent and capable young man,” said Alma Wetzker, Aguigui’s former father-in-law. “It’s not everybody who gets appointed to West Point” prep school.

Wetzker only met Aguigui twice. Once after his daughter and Aguigui got married in 2009. And once at his daughter’s funeral in 2011. “While I was superficially conversant with his politics, I can’t state in depth what they are. But he was conservative, actually fairly conservative.”

“I’m not sure exactly where he jumped the rails,” Wetzker said. “I just wish there was some way to redeem him.”