At first blush, the 2012 national hate crime statistics reported in November by the FBI would seem to be remarkably good news. The total number of hate crimes was down 7% from the prior year, and they were also down in every major category, including anti-black, anti-LGBT, anti-Jewish, anti-Latino and anti-Muslim.

But those numbers are utterly deceiving.

In fact, after years of increasing participation in the voluntary reporting program, the percentage of the population covered by law enforcement agencies that did report plunged to its lowest level since 1995, just 79% of Americans. As a direct result of that drastically lower participation, the 2012 total of 5,796 hate crimes was the lowest since 1991, the year the FBI began to report hate crime statistics.

The number of reporting agencies had slowly climbed over the last 20 years as more and more law enforcement officials underwent hate crime training and national leaders urged them to participate, going from 6,181 agencies in 1992 to 14,575 in 2011. But that number fell to 13,022 agencies in 2012, with two states — Hawaii and New Jersey — failing to make any hate crime report to the FBI at all. That works out to 72% of the 17,985 law enforcement agencies in America. 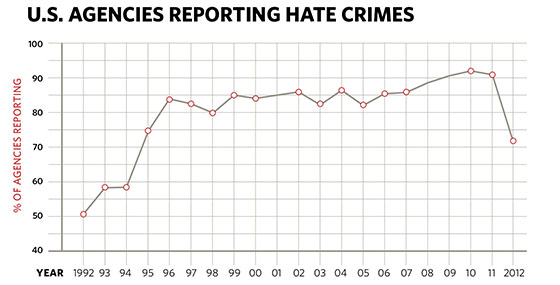 The percentage of America’s law enforcement agencies reporting hate crimes to the FBI has climbed unsteadily since the collection of statistics began. But last year, that percentage fell off drastically, damaging efforts to track a major national social problem.

The lower participation seemed to reflect a diminishing official interest in hate crimes training and prevention. Although government backing was strong in the late 1990s, support had dried up by 2009, when the Federal Law Enforcement Training Center (FLETC) ended its trainings. Similarly, the Southern Poverty Law Center, which had offered a free online course in cooperation with FLETC and California State University, ended its program in 2008 due to dwindling enrollment.

This apparent lack of interest and focus on hate crimes is worrying, not least because the FBI statistics have long been known to vastly underestimate the number of hate crimes. That is not because the FBI, which simply compiles figures provided by the states, is making any error. As recent Department of Justice studies have made clear, more than half of hate crimes are never reported to police at all, and the majority of those that are reported are miscategorized as other kinds of crimes.

According to those studies, which were conducted on the basis of major surveys of the population rather than hate crimes reported by police, the real annual number of hate crimes in America in the last few years has been almost 260,000. That means there are 25 to 40 times more U.S. hate crimes than the FBI numbers, which have ranged from about 6,000 to about 10,000 a year, suggest.

If one averaged that total over the 50 states, they would be expected to have more than 5,000 hate crimes each, varying, of course, according to the size of their populations. In fact, the state numbers reported by the FBI for 2012 are often vastly lower, with, for example, two crimes in Wyoming and four each in Louisiana and New Mexico. States with good reporting systems like California and New York do much better, reporting 1,089 and 741 hate crimes, respectively, for 2012.