After a year of sorrow, fear and anger over the police killing of an unarmed black teenager in Ferguson, Mo., last year, the one thing the troubled little city did not need this summer was a pack of self-appointed guardians of the U.S. Constitution, toting around assault rifles and wandering the tense streets filled with protesters and police.

But that is exactly the headache — make that the migraine headache — the St. Louis suburb got in the second week of August.

At least five members of the antigovernment, militaristic Oath Keepers showed up on the second night of demonstrations, marking the one-year anniversary of the killing of 18-year-old Michael Brown and the Black Lives Matter movement that was born shortly after his Aug. 9 slaying. 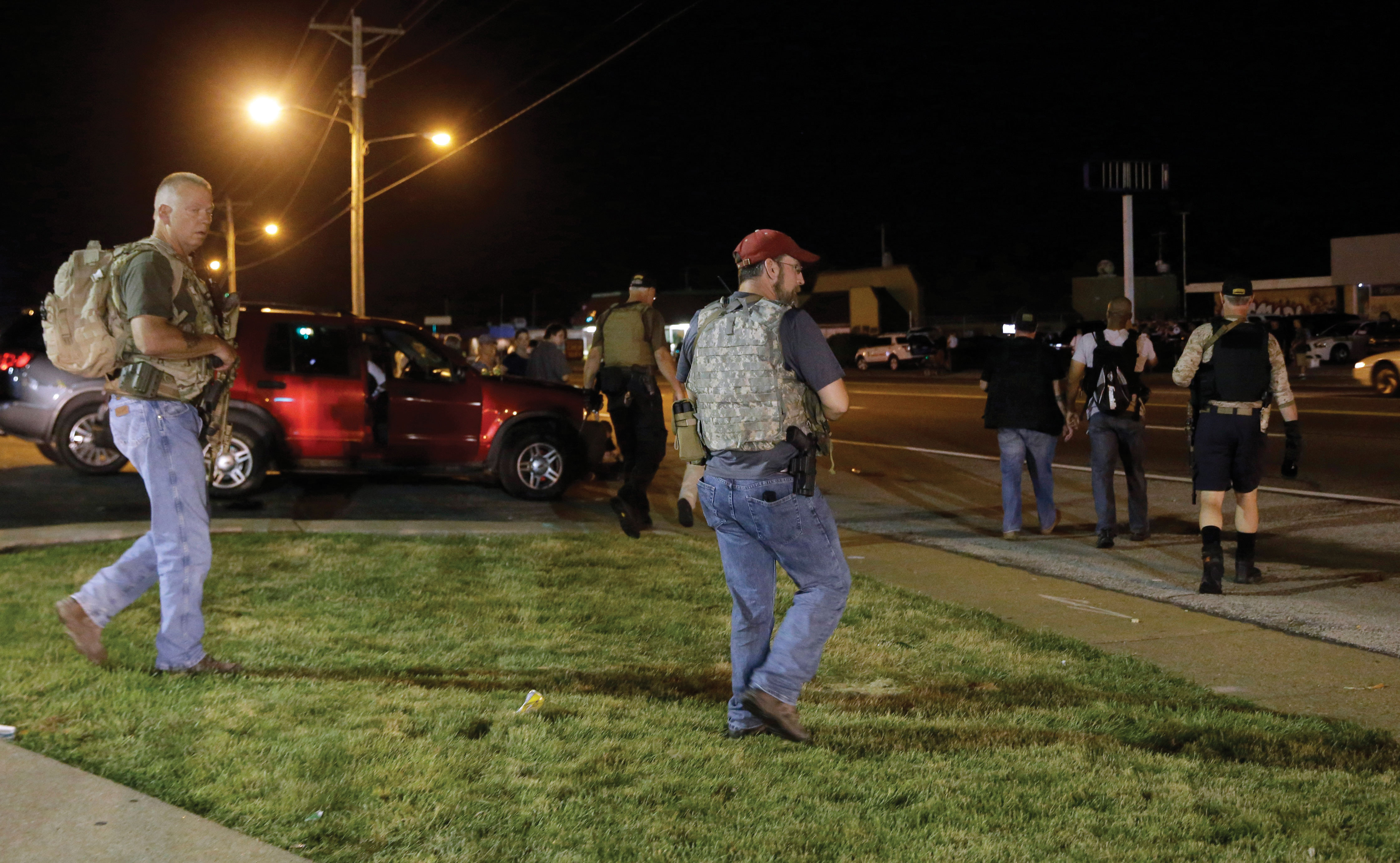 The night before the Oath Keepers arrived tensions were sky high in Ferguson. A teenager brandishing a gun was shot by police.

Neither the “police nor protesters provided a warm welcome” to the heavily armed men as they waded into the largely African-American crowd, according to USA Today. “You’re going to bring some un-commissioned citizens, white citizens, into a black community like this? It’s disrespectful,” Tala Aham, 30, told Reuters news service. “Here, in a black neighborhood, we’re already living in a state of terror.”

As for the Oath Keepers, they said they had come to town simply to protect property and the freedom — and the hides — of a couple of reporters from Infowars, the website of conspiracy king Alex Jones. But Infowars reportedly denied engaging Oath Keepers as private security. 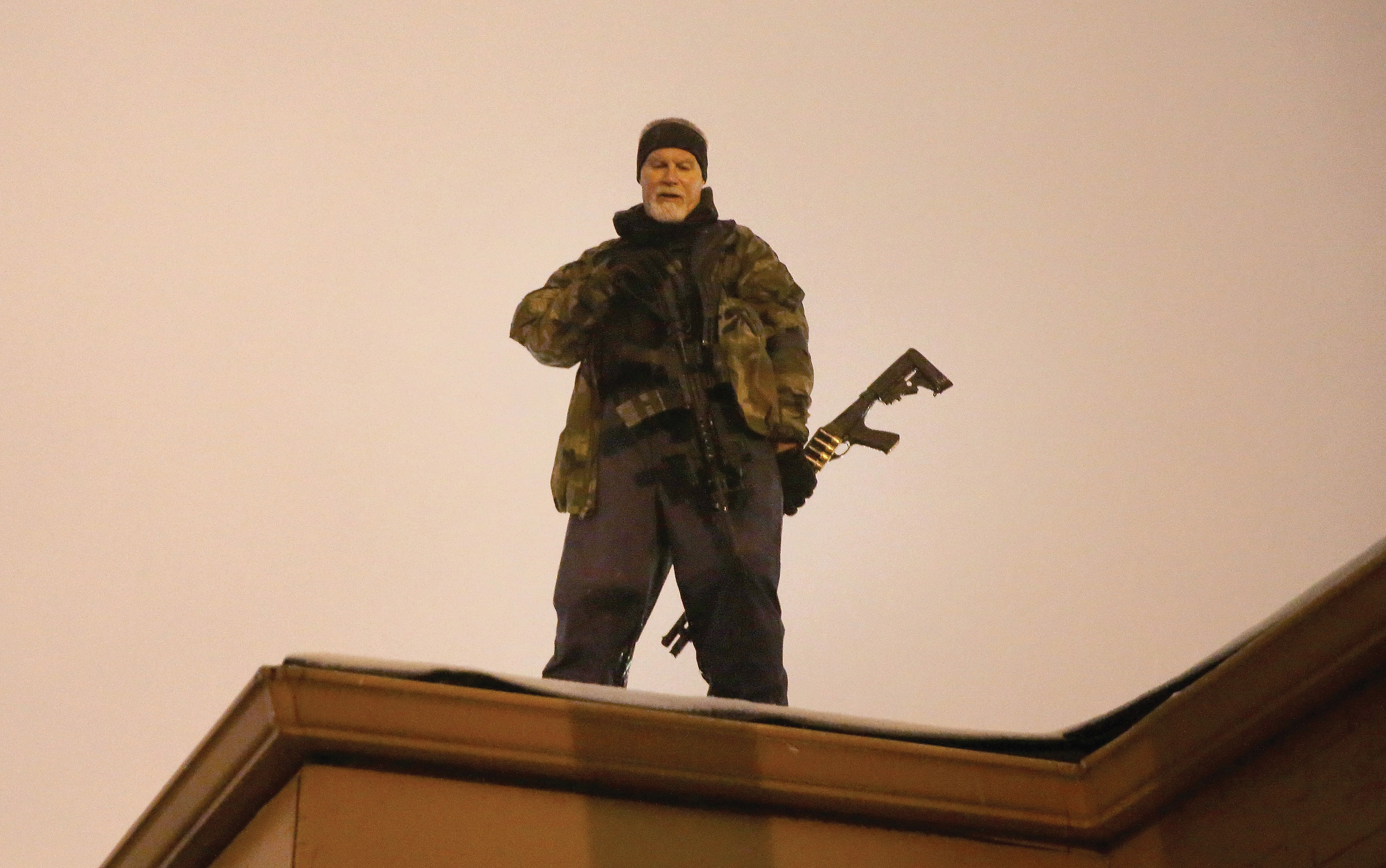 Into the tinderbox: Members of the conspiracy-minded Oath Keepers showed up in racially troubled Ferguson, Mo., packing an array of heavy weaponry.

A St. Louis-area Oath Keeper, Sam Andrews, told Newsweek that many African Americans in Ferguson told him that if they openly carried weapons like the white Oath Keepers, the police would shoot them dead. Andrews argued with them, insisting the police would do no such thing. But after every single African American told him the same thing, Andrews said he realized that maybe there was a racial divide.

“St. Louis County police have so violated the people’s rights,” Andrews said, “that the people in the black communities here believe if they even thought about publicly exercising their God-given right for protection, for carrying a firearm, that they would be shot dead by the police — that’s a real issue.”

He said “we are flying black Oath Keepers in from around the country to educate the black leaders and the people of Ferguson that not only can you open carry, you should open carry.”

Ferguson was not the first stop on the Oath Keepers’ wacky tour of 2015.

In April, Oath Keepers and other antigovernment “Patriot” groups flocked to the hills of southwestern Oregon to make a stand against the federal government in what amounted to an argument over paperwork in the language in a claim dispute for an old gold mine.

The heavily armed Patriots gathered near the tiny town of Merlin, Ore., and nearby Grants Pass and Medford for what many of them seemed to hope would be an armed confrontation with the forces of the tyrannical Bureau of Land Management (BLM).

But the only confrontation was in a courtroom with briefs instead of bullets.

A spokesman for BLM said agency employees were flabbergasted that a dispute over unfiled paperwork could dissolve into a group of men brandishing weapons. “We have hundreds of claims down here,” the spokesman told the Intelligence Report, “and it’s not uncommon for us to come across operations that are not in compliance or don’t have documentation. So it’s kind of a shock to have this blow up like this.”

The Oath Keepers’ wackiness marched on into May. Stewart Rhodes, the founder of the group, spoke at the Arizona Liberty Caucus’ May 5 “Liberty On Tap.” A video of the speech, according to The Arizona Republic, was obtained by Right Wing Watch, and it was a doozy.

In the video, the Republic reported, Rhodes calls Sen. John McCain, R-Ariz., a traitor to the Constitution who should be tried, convicted, and “hung by the neck until dead.”