Anti-racist activists and racist groups have fought running battles at rallies and marches across the United States for decades.

Billy Roper, one of Dr. William Pierce’s most dedicated acolytes within Pierce’s neo-Nazi National Alliance, led such marches in the early 2000s.

In July 2001, Roper led a small procession in support of neo-Nazi musician Hendrik Möebus, who was at that time fleeing murder charges in his home country of Germany. Under scattered rain showers, Roper was attacked, his right eye smacked with a metal bar. Photographers clicked away, capturing him with blood running down his face, onto his blue-and-white stripped dress shirt.

In January of 2002, Roper again led a march. Devotees of the movement traveled to the small town of York, Pennsylvania. Objects and fists flew. Blood flowed. Within the canon of this subcultural street war, it earned a name, “The Battle of York.”

Later that year, in August, Roper led marchers through northwest Washington, D.C., from Union Station to the West Lawn of the Capitol. There, around 1,000 gathered to counter-protest an equal number of racists. Separated by metal barricades, neither could reach the other.

These skirmishes took place before the advent of social media and were anomalies to both media and bystanders. The act of political violence wasn’t vogue or viral then like today. 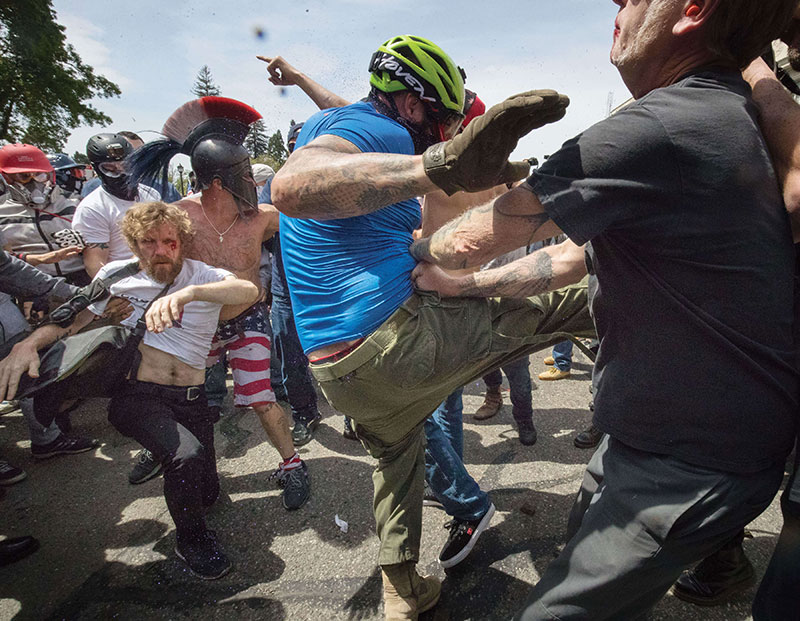 Members of organized hate groups have taken political violence to the streets in increasing numbers.

Just as some within the far-right — particularly those within the white nationalist “Alt-Right” — believe their “meme war” delivered Trump the White House, many within those circles now appear to believe the viral potential of digitally recorded violence occurring at political rallies will win them recruits and a way forward for their ideas in an American political landscape.

There is precedent for such belief.

An ugly undercurrent of violence perpetrated by supporters and detractors marred many of Trump’s campaign rallies. The nation watched while Trump, at times, eagerly encouraged violence. The news website Slate chronicled 20 such incidents at his rallies between October 14, 2015 and June 18, 2016.

The Don Quixote of today’s white supremacist soapboxers, Matthew Heimbach, head of the Traditionalist Workers Party, claimed this spring that he was acting on Trump’s direct orders when he shoved and screamed at a young African-American female during a campaign rally in Louisville, Kentucky, in July, 2016.

For organized, violent racists and nationalists, this mindset is an everyday one. And they helped transfer a Spartan shield wall mentality from Trump’s campaign rallies to the series of “Make American Great Again” (“MAGA”) rallies coordinated across America in late March.

Aging racist skinheads from the Vinlanders Social Club (VSC) and The Hated launched a new group in February called the American Guard (AG). One of its leaders, Brien James, once bragged that his Joint Terrorism Task Force file is “a mile long,” a reputation that extends from his position as a national leader of VSC. Its members have been imprisoned for drug charges, assaults on minorities, and murder.

The Hated, long defunct, counted skins like Gabriel Cafara as members. Cafara has been convicted of biased intimidation and making terroristic threats, both hate-related offenses, and on firearms charges.

Upon being sentenced to 15 years in prison, New Jersey’s Attorney General at the time, Zulima V. Farber, said, “We are pleased that this dangerous criminal is going to prison. This defendant’s violent strain of racism and his access to firearms made him a grave threat to our communities.”

Curiously, the American Guard bills itself as open to all races.

The group made its debut at the “MAGA” rally in Indianapolis, Indiana. Members of VSC came to support James, whose new group claimed a Klansman and his own sons amongst its ranks. Screws had been driven through their homemade shields, and one was ringed with a sharpened blade. Makeshift PVC flagpoles concealed lead pipes. One member carried a Glock with 10 extra magazines on his tactical vest. The group was denied entry to the capitol grounds based on the weapons they carried.

Members of a neo-Nazi fight club, however, did find opposition at the “MAGA” rally in Huntington Beach, California. The club, calling itself the “DIY Division,” attacked vastly outnumbered anti-fascists with zeal, pummeling them into the sand before news media. Amongst them were members of the Hammerskin Nation, a notoriously violent racist skinhead crew. Wade Michael Page, whose rampage at a Sikh Temple in Oak Creek, Wisconsin in 2012 left six dead, including himself, was a member.

The coverage of the brawl in Huntington Beach would pale in comparison, though, to what occurred two weeks later, in mid-April, in Berkeley, California.

There, the rally’s setting itself was provocation for what has become known as “The Battle of Berkeley.” Staged in Martin Luther King, Jr. Park, a mish-mash of white nationalists and other bigoted, far-right miscellany intermingled with a milieu of ardent Trump supporters. One shirtless, tattooed warrior donned a Spartan war helmet.

The mish-mash, like their counterparts, came prepared to brawl, replete with masks, goggles, helmets, remedies for pepper spray and medic kits.

But what looked like a scene from WWE Smackdown devolved into a roaming riot, and included tear gas, gang-style beatings, and arrests amidst omnipresent cellphone and GoPro cameras. The right proclaimed victory and launched a messaging offensive across Twitter and Facebook

That was the day that the so called “Alt-Right’s” meme-war manifested “irl” ­— “in real life.” Nathan Damigo, leader of the white nationalist student group Identity Evropa, became a far-right darling after video of him punching a 95-pound female counter-protestor in the face, then fleeing the scene went viral. 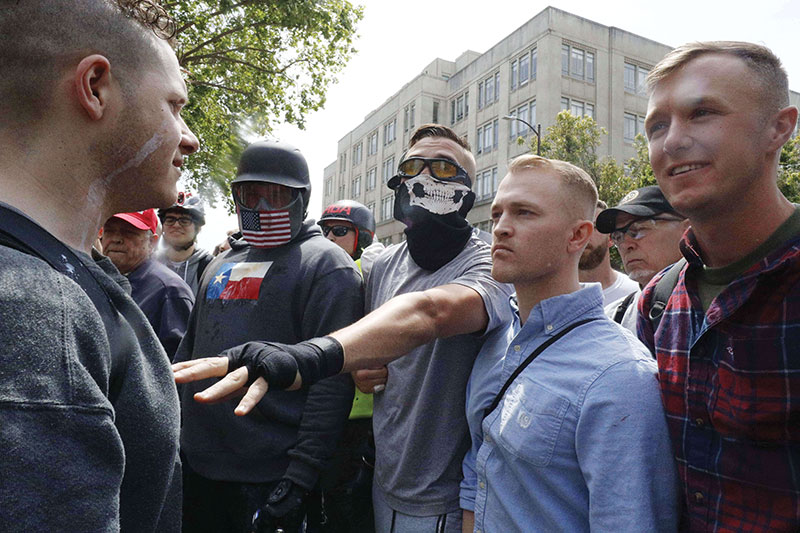 Three weeks later, in early May, at another right-wing rally in Berkeley, Damigo posed for pictures with other rally-goers, basking in his newfound fame, as Shane Bauer of Mother Jones magazine reported. This time, the far-left didn’t show, and Damigo and others were at loss for online fanfare, which has also failed to materialize for fight clubs like the American Guard.

The new Spartans have arrived, Damigo and Brien James will tell you. Roper’s path was a dead-end, they’ll say, but not theirs. Yet they still cling to the hope that the virus of political violence is catching.