The Watchmen on the Walls, a multinational anti-gay organization that declares, "There is a war between Christians and homosexuals," expects more than 700 followers to attend a three-day WOTW conference in Lynnwood, Wash., beginning Oct. 20. One of the speakers will be Watchmen co-founder Scott Lively, author of The Pink Swastika, which claims that gays helped to orchestrate the Holocaust. 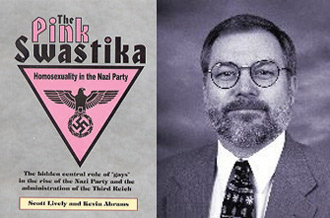 In August, Lively spoke at a WOTW conference in Novosibirsk, Russia. He discussed the murder of Satender Singh, a 26-year-old gay Indian man who was beaten to death by Russian-speaking gay bashers in a park near Sacramento, Calif., a hotbed of militant anti-gay activism among Slavic immigrants.

The audience laughed and applauded as Lively described the killing.

Sacramento law enforcement investigators describe Singh’s death as a hate crime. According to witnesses, Singh was enjoying a holiday outing with friends, who were married heterosexual couples, when a group of Russian-speaking young men called them “Sodomites” and “7-11 workers.” When one of Singh’s friends, a pregnant woman, said that she didn’t want to fight, one of the men responded, just before Singh was felled with a sucker punch, “We don’t want to fight you either. We just want your f----- friend.”

Lively delivered a quite different account of Singh’s death at the WOTW conference in Russia:

I've been working with the Russian community in Sacramento. And I want to tell you this is an example [that] will show how bad things are in the United States. There was a situation in Sacramento a few weeks ago in a public park. There was a group of homosexuals and they were very drunk. And one of the homosexual men was taking off his pants. And there were children in the park. And a Russian man went over to these homosexuals and he was rebuking them. And there started a fight. The Russian man punched the homosexual [audience applauds and laughs]. No, no… don't.

The homosexual was very drunk and he fell down and he hit his head and he died. And now [audience applauds] no … no.

And the Russian man has been accused of murder. And the FBI is seeking him. And all the powers in Sacramento have been accusing all of the Russian community of being murderers. And the goal is to silence everyone who speaks against homosexuality. And this is a very dangerous situation.