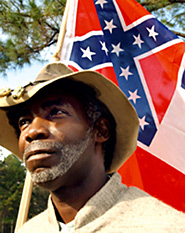 Last week, African-American neo-Confederate activist H.K. Edgerton stopped by Montgomery, Ala., to commemorate the five-year anniversary of his 1,385-mile “March Through Dixie,” a fundraising trek from his home in Asheville, N.C., to Austin, Texas. He was dressed in a gray Confederate soldier’s uniform and hoisted a large Confederate flag, mounted on a pole, over his right shoulder. While visiting Montgomery, Edgerton — an extremely rare black face in the overwhelmingly white neo-Confederate movement — granted Hatewatch an interview in which he detailed his unique perspectives on the Civil War, the Ku Klux Klan, and race relations in the antebellum and postwar South. Here are just a few of his more interesting assertions:

• Before the slaves were freed, “Black folks and white folks were family,” he said. “We did all kinds of things together here. White people and slaves saw each other on the streets and they tipped their hats to each other … and asked each other about their families.”
• “The War Between the States is not over. This thing is real!”
• “I don’t see [the Ku Klux Klan] as terrorists. I see them as — I hate to use the word ‘vigilante,’ but vigilante sometimes ain’t as bad as you think. When your government fails you and fails to protect you, you have to turn somewhere.”
• The KKK was “just protecting the people — all of the people, black and white. Blacks wanted to be a part of that.”
• “Why would a man tell my babies [that] walking into a classroom with a Confederate flag on [their clothing] that [that is] demonic, evil and offensive? Black folks in the South been living with that flag all our lives.”
• “It wasn’t so much about [then-Alabama Gov.] George Wallace going to the schoolhouse doors, saying, ‘No, you can’t integrate.’ The thought in his mind was, ‘No, you can’t tell me to integrate. Let us deal with this, and we’re gonna deal with it.'”
• Slaves “were given a new pair of pants and a new pair of shoes every day, and he thinks this white man was cruel! [Black slaves] had the same medical facilities that the white man had. … You look at most of the slave pictures … they are not raggedy and torn. They lived better than most! … Most of them looked better than most of the white folks around and lived better than most of the free world!”

Edgerton also defended what he said was the constitutional right of white supremacists to display hangman’s nooses and addressed what he called “rumors” of dissension between himself and his neo-Confederate allies — the Sons of Confederate Veterans, the Southern Legal Resource Center (SLRC), and SLRC head Kirk Lyons. (Lyons had been one of Edgerton’s odder bedfellows of recent years — Lyons spent most of his career as a lawyer defending white supremacists, and was married on the grounds of the neo-Nazi Aryan Nations by its late leader in a ceremony in which infamous Klan leader Louis Beam was the best man. Despite that, until recently, Lyons regularly depicted Edgerton, who is the former head of the Asheville NAACP, as his good friend.)

Earlier this year, Lyons seemed to be disassociating himself from Edgerton when he wrote, “The SLRC is not and has not been involved in any of H.K.’s travel or appearances for some time.” But Edgerton claimed he is still chairman emeritus of the SLRC’s board of advisers and insisted that there “never” was any dissension.

In fact, Lyons is just “a misunderstood man” Edgerton said. “If every bigot in America was Kirk Lyons, we’d never have another bigotry problem, ever.”

When the interview concluded, Edgerton walked to a 2005 champagne-colored Cadillac DeVille and popped the trunk, revealing a wealth of Confederate flags, stickers and pamphlets.

Last March, Sons of Confederate Veterans activist Elijah Coleman accused Edgerton of the unauthorized sale and use of SCV-issued Confederate battle flags as well as demanding large amounts of money to buy a new car.

Edgerton said the Cadillac belonged to his sister.