That’s right, according to high-profile ads placed this month in The New York Times and The Nation by a new front group for the Federation for American Immigration Reform (FAIR) and two other anti-immigrant hate groups. The ads, which are based on dubious statistical analysis, claim that an immigration-fueled population boom will dramatically worsen traffic congestion and destroy pristine lands. 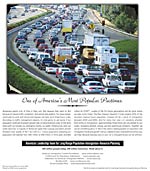 The ads were placed by an organization calling itself America’s Leadership Team for Long Range Population-Immigration-Resource Planning. “We’re the nation’s leading experts on population and immigration trends and growth,” boasts one of the ads.

Actually, America’s Leadership Team is a public relations front group for a coalition of five anti-immigration organizations, three of which—FAIR, American Immigration Control Foundation and the Social Contract Press—are listed as hate groups by the Southern Poverty Law Center for their links to white supremacists and publication of bigoted materials.

All five of the groups behind America’s Leadership Team—the other two are Californians for Population Stabilization and NumbersUSA—are financed by John Tanton the puppet master of the modern anti-immigration movement. 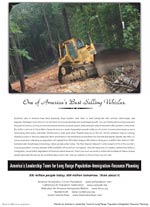 American’s Leadership Team launched its ad campaign in early June by placing ads in “major national publications,” according to a news release from Californians for Population Stabilization.

Although it’s not clear how much the coalition paid for its half-page New York Times ad (a Times spokeswoman said there were too many variables to provide rate information), The Nation charges non-profit groups $4,412 for full-page color ads like the ones that the group placed in its magazine this month. Both ads ran at least once in separate issues. In a June 16 editorial note, the left-leaning Nation warned readers about the America’s Leadership Team advertising and stated that The Nation did not agree with its “premise and politics.”

“We’ve gotten a heated reaction, as our readers do when there’s an opinion out that doesn’t seem to mesh with our editorial viewpoint,” Ellen Bollinger, the Nation’s vice president for advertising told the Intelligence Report. “But we have a liberal advertising policy, and we try to err on the side of giving light to divergent opinion.”

It’s not the first time that Tanton and other anti-immigration activists have tried to woo environmentalists in an attempt to gain political support for their cause. In 1996, Tanton lobbied the Sierra Club, the nation’s largest environmental organization, to adopt a plank advocating sharp restrictions on immigration. In 2004, an anti-immigration faction tried to take over the Sierra Club by winning election to its board of directors. Both efforts failed.

The group’s latest campaign relies on outdated numbers, since the ads’ projection of 600 million Americans by 2100 is based on the 1990 Census. (The Census has published more up-to-date projections based on the 2000 Census, but they only go up to 2050.) The ads also cite statistics without fully explaining them: the Pew Hispanic Research Center does predict that 82% of the increase in U.S. population from 2005 to 2050 will result from immigration, but that figure includes the U.S.-born descendants of immigrants. And it doesn’t represent a departure from recent decades, during which immigrants have accounted for most of the country’s population growth.

Of course, the real message of the ads is that immigrants are bad for the environment, and therefore bad for America. According to the ad that appeared in Wednesday’s Times, “For every four new U.S. residents whether from births or immigration, approximately three more cars are added to our roads, increasing gridlock, energy use and greenhouse emissions.”

But this premise is flawed because the transportation habits of immigrants are different from those of native-born Americans, according to professors at the University of California, Los Angeles.

David Hayes-Bautista, a professor of medicine and health services, co-authored a 2005 study that found recent Latino immigrants in California—and to a lesser extent long-term Latino immigrants and U.S.-born Latinos—are much more likely to carpool or use public transportation than non-Hispanic whites. “If everyone (in California) went to work the way recently arrived immigrants did—by carpooling or using public transportation—that would reduce the number of cars on the road by nearly half,” he told the Intelligence Report.

“Recent immigrants are in fact substantially less responsible for sprawl (they live in the highest density communities) and traffic (they disproportionately take transit and walk), as they are poor,” UCLA urban planning professor Randall Crane E-mailed the Report. “Eventually, they better assimilate into the population and will be more like everyone else, which is to say they are no worse than anyone else.”