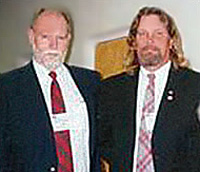 (right, with convicted "Aryan" terrorist Michael Tubbs), president of the neo-secessionist League of the South, has long claimed angrily that his is no racist group and that he is no white supremacist — this despite his repeated calls for a return to “general European hegemony” in the South, his description of slavery as “God-ordained,” and, in a particularly tasteless attack on African Americans, his mocking of his former black university students’ names and people helped by affirmative action (“A quote from a recent affirmative action hire: ‘Yesta-day I could not spell ‘secretary.’ Today I is one”).

Now, Hill has returned to the kind of vulgar racist humor he apparently has a particular taste for. In the latest edition of his League of the South tabloid The Free Magnolia, Hill publishes a charming item bylined by one “LeShawn Jones” that reports a fantasy marriage between Hillary Clinton and Barack Obama as if it were fact. It then goes on to describe Obama, the first major party black presidential nominee in American history, as attending the “wedding” wearing “only the simple leather thong of an African tribe” with a single “accessory” — “a large, rubber spear.”

Despite being listed for years as a hate group by the Southern Poverty Law Center and even including a convicted "Aryan" terrorist in its leadership ranks, the league has managed to make some surprising allies of late — the allegedly “progressive” secessionists of the Second Vermont Republic (SVR), who have gone so far as to co-sponsor a major conference with the league. SVR leader Thomas Naylor has angrily denied that the league or its leader — who regularly describes egalitarianism as a left-wing “Jacobin” horror — are racist in any way. In the same breath, Naylor has claimed that he was always opposed personally to racism.

Hill’s latest comes in an undated issue of The Free Magnolia that is marked only as Vol. 2, No. 1. As a parting shot, he offers up a cartoon on the last page of the tabloid published in his hometown of Killen, Ala., that is arguably anti-Semitic. It depicts an extremely ugly woman marked as “Dollar” (the cartoon suggests that gold and silver look “spectacular” next to the dollar), with a TV commentator in the panel concluding: “Golda Meir [a former Israeli prime minister] would have looked good next to this dollar!”