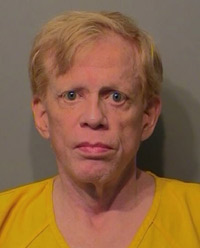 Many people thought Edgar Steele went off the deep end in 2002, when, after unsuccessfully defending the neo-Nazi Aryan Nations and its late leader in a lawsuit, he wrote the coming-out essay, “It’s the Jews, Stupid!” After all, the man had spent most of his life up to that point as an obscure corporate accountant and, later, a small-time lawyer in California and then Idaho. Now, he began to describe himself as the “attorney for the damned,” rail on about “predatory” Jews, accuse the government of a 9/11 conspiracy, and predict a bloody race war.

But that may not have been the half of it. Today, Steele is expected to appear at a preliminary hearing in Idaho after being arrested Friday and charged with trying to pay a confidential witness to murder his wife of a quarter century — the mother of his three children — and her mother. Steele, 64, tried to pay the witness to carry out the killings on Friday, when he had an alibi, according to a probable cause affidavit. The Idaho Statesman also reports that Steele had allegedly been talking to the witness — and paid $500 travel money in advance — about the murders for six months. He also allegedly mentioned other people he wanted dead.

The witness told the FBI that Steele had promised up to $25,000 to carry out the murders, adding that the attorney said he would furnish another $100,000 if an insurance policy on his wife paid out. Steele also allegedly said that if the witness were caught, Steele would take care of the witness’ family in return for silence.

No motive for the plot was revealed. A prosecutor said she believed the couple were still married and not separated. There seems to have been no public indication of anger on Steele’s part toward his wife. “My wife and my kids — they are my rock,” he wrote in an otherwise bloody-minded, July 29, 2006, essay. (In the same essay, he bemoans the fact that his own father “believ[es] that I am a nut case.”)

According to the affidavit, the women were to be killed in a car crash the witness would arrange. The witness, after informing authorities last week that the plan was to be put in motion Friday, was sent to a meeting with Steele wearing a recording device. Authorities said they had recordings of Steele discussing details of the planned murders. “Edgar Steele told [the witness] that he has no second thoughts and he wants the plan carried out,” the affidavit said. “This statement was made multiple times during the meet.”

Steele served in the Coast Guard, got a master’s degree in business and was an accountant in San Francisco before changing careers and getting a law degree from the University of California, Los Angeles, law school in 1982. He moved in the mid-1980s to Idaho, where he worked in obscurity as a lawyer until taking the Aryan Nations case in 2000. The group was being sued by the Southern Poverty Law Center (SPLC) on behalf of a woman and her son who were attacked by Aryan security guards, but Steele portrayed it as an attempt to crush free speech. A jury did not agree, however, and imposed a $6.3 million judgment on the Aryan Nations and its leader, Richard Butler, who died four years later. The group subsequently dissolved into small, squabbling factions, becoming a shadow of its former self.

“We always thought that Edgar had a few screws loose,” said Richard Cohen, the president of SPLC and a lawyer who was part of the SPLC’s legal team in the case and came to know Steele. “But we never would have pegged him as a killer.”

Steele, who wrote the 2004 book Defensive Racism, seemed to grow more radical, and more conspiracy-oriented, as the years passed. But there was little to suggest that he was prepared to murder his own family members. He, did, however, have this to say in an April 1, 2008, essay: “Welcome to my mind. This is the way it works. As I told my wife before we got married: I’ll make you two promises. First, I’ll never hit you. Second, it will never be boring.”