Jarred Hensley is a white supremacist who likes to hurt people. He did prison time for it. And now he's figured out a way to hurt people and even break a country's laws without having to do jail time. Along the way, he's also caused something of an international uproar on the Internet.

Hensley is a Cincinnati-based activist in the Imperial Klans of America (IKA), one who already brought serious trouble to the organization. In 2006, he and fellow IKA member Andrew R. Watkins brutally assaulted a 16-year-old in rural Kentucky because they thought he was Latino. The pair spent three years in prison for the attack, and the SPLC brought a lawsuit against the IKA that resulted in a $2.5 million judgment against the hate group.

Now, Hensley — out of prison and evidently with a lot of time on his hands — has joined the ranks of Internet "trolls" who haunt the Web and harass people for various reasons, including leaving ugly messages for bereaved family members and friends of the deceased. (A recent New York Times Magazine piece explored their weird world in depth.)

This kind of activity, as it happens, is illegal in many nations, including Great Britain (where one "troll" was recently jailed for polluting a tribute site for a former reality-TV star) and Australia. Which is where Jarred Hensley came in.

In the past month, Hensley has been vandalizing Facebook tribute sites to two different young Australians — Chantelle Marie Lowe, a 16-year-old murder victim, and Cameron Lowe, a 17-year-old who died after an assault. The vandalization included crude and vulgar messages, as well as pornographic and graphically gruesome images.

When a cousin of Rowe's left a message hoping that authorities would take care of the matter, Henley taunted: "I won't go to jail ... i'm not in Australia, therefore I cannot break the Australian law".

According to the Sydney Morning Herald, "two concerned Australians" infiltrated the chat room where the trolls were discussing their handiwork, and then baited him with insults, inducing him to show himself on a webcam in order to give them the finger:

"He was only too proud to give out his name and he said come and get me, because he knows that international laws aren't there for Australians to do anything," one of the two said in a phone interview.

Using the webcam image and the name, it was easy to verify the identity of Hensley, thanks to the distinctive tattoos covering his arms. Hensley is pictured online in formal KKK regalia giving a Hitler salute with a Nazi flag in the background. 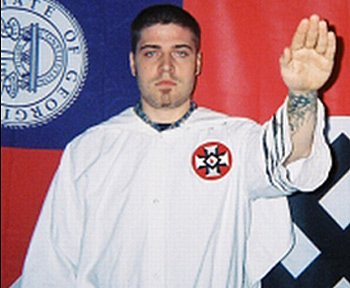 Even though Hensley has been fingered as the culprit, he remains defiant, apparently continuing to vandalize other Facebook tribute sites — though mostly in the U.S.

Australians have been prosecuted for these kinds of acts; earlier this year, a 22-year-old Queensland woman was given a three-month suspended sentence for vandalizing a dead woman's Facebook tribute page. The recent incidents involving Hensley outraged Queensland Premier Anna Bligh, who wrote to Facebook executives demanding to know what they intended to do about it. Facebook responded to sending out a warning to its Australian members with instructions on how to make tribute pages safe from cyber-vandals.