It’s hard to say exactly what the Sons of Confederate Veterans (SCV) remembered so fondly on Saturday during a sesquicentennial celebration of Confederate President Jefferson Davis’ inauguration: a way of life that has been dead for a century and a half, or the day when the public at large appreciated their cause.

With booming cannons and bombastic rhetoric, about 1,000 Confederate revelers dressed in period costume marched up Dexter Avenue to the Alabama State Capitol – the end of the very same route taken by Martin Luther King Jr. and thousands of others who participated in the Selma-to-Montgomery voting rights march in 1965. There, on the gold star where former Alabama Gov. George Wallace gave his 1963 inaugural address with the infamous phrase, “segregation now, segregation tomorrow, segregation forever,” an actor playing the part of Davis became the president of the Confederacy to cheers and hurrahs. 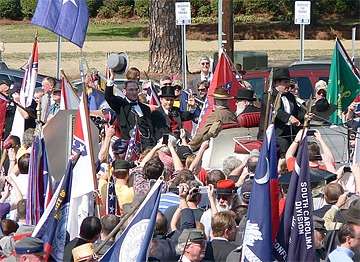 But the SCV wasn’t interested in commemorating King or the civil rights march, nor the passage of the 14thAmendment that gave freedmen citizenship, instead their hope is to ensure “the Heritage of Confederacy” is remembered and portrayed in the right way. “We say very proudly to the world: We are proud of our heritage and will not lay down the mantle of its defense … As long as there blows a southern breeze, this flag will fly in it,” said Charles “Chuck” McMichael, past commander-in-chief of the SCV, gesturing to one of the hundreds of confederate battle flags flying.

Open only to male descendents of Confederate veterans, the SCV sees Southern history differently than most historians. From the group’s point of view, the confederacy was a victim of Lincoln’s tyranny. The South did not intend to fire the first shots on Fort Sumter; rather, Lincoln manipulated them into it. There was no “Civil War,” but instead an attempt by one country to invade another that was simply fighting for “independence.” The Emancipation Proclamation did not free the slaves and the war had nothing to do with slavery. The group can’t even admit that the South, home of slavery, may have been uniquely racist, arguing that there was more of that in the North.

But racism cuts to the heart of the SCV, which was roiled by an internal civil war for much of the last decade between racial extremists and those who want to keep the Southern heritage group a kind of history and genealogy club. In the end, the extremists won. 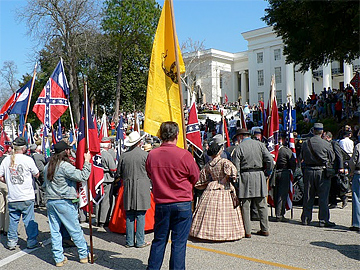 The current commander is Michael Givens, who is best known for his 2000 video about a “heritage celebration” held in Columbia, S.C., to defend the display of the Confederate battle flag over the statehouse there (the flag was taken down in July 2000). The video was heavy with interviews from hate group members. Other extremists on the general staff include: Lt. Commander Charles Kelley Barrow, once was a member of the League of the South; Adjutant-in-Chief Chuck Rand, also a former leaguer; and Chief of Protocol Lee Millar, once the contact for an event scheduled to feature a blackface group called the Snowflake Minstrels.

Such veiled racism lets the SCV parade under the guise of a well-meaning group of people who view Civil War re-enactments as a hobby. McMichaels on Saturday even co-opted icons of the Civil Rights Movement to justify his defense of the Confederacy, saying, "Like Rosa Parks who went from the back of the bus to the front, we of confederate descent have been pushed to the back ... and it is time for us to say 'No more!'" 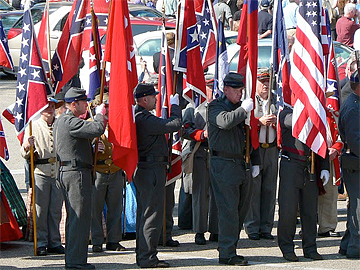 In the end, it’s all part of a slick machine to control the image of the SCV for public consumption. Rand, for example, on Saturday confiscated racist newspapers from his supporters after police arrested Olaf Childress, the neo-Confederate stalwart who publishes The First Freedom. Many wouldn’t accept the paper he offered, but others tucked copies under their arms, hiding the masthead that proclaims the newspaper to be an invitation to “the Zionist-controlled media’cracy to meet a rising free South.”

As if the theatrics of a Davis inauguration were not enough to celebrate the Civil War anniversary, a week ago the SCV chapter in Mississippi announced a campaign to push for a commemorative license plate honoring Confederate Gen. Nathan Bedford Forrest, a millionaire Memphis slave trader and the first national leader of the Ku Klux Klan. The state has shown no interest in the proposal.