It’s hard enough trying to overcome a history of violence and race hatred for a new life of redemption and purpose. Imagine trying to do so with the evidence of your evil past etched indelibly on your face in the form of tattoos proclaiming racist and violent themes. 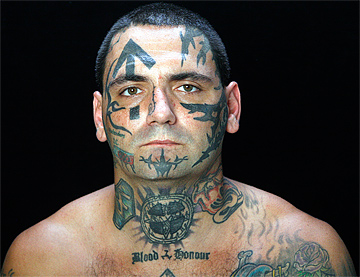 After spending 16 years as a vicious brawler and razor-carrying enforcer for white-power skinhead gangs operating in Indiana and Ohio, Bryon Widner (above) became a husband and father – and realized he didn’t want to raise his family in the hostile culture of white supremacy and violent lawlessness he once embraced and promoted. But the co-founder of the Vinlanders Social Club skinhead gang – at one time one of the largest and most notorious of the nation’s skinhead groups – knew that his marked face would forever frustrate his efforts to rejoin the respectable world.

Against daunting odds, Widner made a permanent break with his past, undergoing some two dozen horribly painful laser treatments over the course of two years to remove the tattoos on his face and neck. The expensive treatments were made possible by the Southern Poverty Law Center – the same civil rights and social justice organization that once tracked Widner’s career in hate.

The dramatic story of Widner and his wife, Julie, is captured in the one-hour documentary “Erasing Hate,” which airs Sunday at 9 p.m. EDT on MSNBC. The film recounts the couple’s life within the white power movement, the decision that led them to leave it, and the treatments he underwent to remove the tattoos. 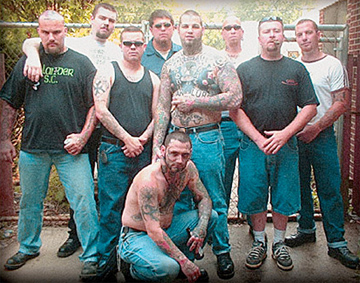 “The Vinlanders were made up of people who were too extreme for the rest of the movement,” said Joe Roy, the SPLC's chief investigator, who initially made contact with the newly penitent Widner and narrates portions of the documentary. “All skinheads are violent, but they were up there at the top.”

“Their idea was to challenge the Hammerskins’ longheld authority in the skinhead culture,” added SPLC Senior Intelligence Analyst Laurie Wood. “They were the young upstarts, the young Turks that were going to take over.”

By 2007, the Vinlanders had eight chapters in six states and a well-deserved reputation for nastiness. In March 2007, Vinlander Eric “The Butcher” Fairburn, Tim Dumas and Josh Kern hunted down a homeless black man on a busy Indianapolis street and beat him senseless for his having the audacity to say, “nice tattoo” to Fairburn.

“Widner is one of thousands of young kids who get pulled in, looking for family, looking for acceptance,” Roy said. “When you get all those tattoos, pardon the pun, you’re branded. There’s no way out. Nobody in society is going to hire you or give you a chance. It’s worse than having a criminal record, and most of these kids have both, tattoos and a criminal record. So they’re not going to get the job as a lifeguard down at the Y.”

What Widner has done, Roy said, “took a lot of courage. It really is a story of redemption. This is a guy who went against some very dangerous people. He was a marked man. And he was trying to get back into a society that didn’t want him in the first place – all for the sake of his family. That takes a lot of guts.”

To see a trailer of the documentary and more about Widner’s story, click here.