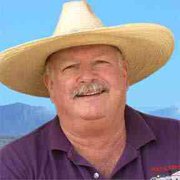 Crockett Keller wants handgun owners to know how to be “victors, not victims.” That’s why the Texas-based concealed carry license (CHL) instructor, who owns Keller’s Riverside Store and HooDoo Ranch Realty (established in 1862 by Keller’s great-great-grandfather), teaches courses in handgun use and safety in exchange for $100.

But what he won’t do is teach Muslims how to shoot – or liberals, for that matter.

He made that crystal clear in a radio advertisement for yesterday’s CHL training at his store in Mason, Texas. “If you are a socialist liberal and/or voted for the current campaigner-in-chief, please do not take this class. You have already proven that you cannot make a knowledgeable and prudent decision as required under the law.

“Also, if you are a non-Christian Arab or Muslim, I will not teach you the class. Once again, with no shame, I am Crockett Keller. Thank you and God Bless America.”

Reached by phone early this afternoon, Keller – whose website includes a link to the ad – told Hatewatch he had received about a thousand supportive messages since the ad first aired a few days ago, and only two complaints.

Asked why he doesn’t want Muslims in his class, Keller said, “I have a particular philosophy about concealed carry. I take it very seriously.”

“I consider all Muslims our enemies, no matter how nice they are. … I could not trust one and I, as an instructor, am not going to teach one how to shoot a gun and aid him in getting a license.”

It’s not clear whether this type of discrimination is lawful. Keller, though licensed by the state to teach the gun course, is not an employee of the state of Texas, and business owners do have considerable discretion in deciding whom they wish to serve. However, except in the case of private clubs, anti-discrimination laws generally prohibit businesses from denying service based solely on religion.

A spokesman for the Texas Department of Public Safety (DPS), which issues concealed carry instructor permits, told Hatewatch that department officials learned of Keller’s ad earlier today. But they cannot take action unless a written complaint, complete with evidence, is filed. “In my opinion it’s a horrible thing for the guy to do,” the spokesman said, “but we have to go by protocol.”

Keller, meanwhile, has no regrets. “I exercise my prerogative … to choose who would be good candidates for concealed handgun license,” he said. “I wish that the people who had taught the Muslims that flew the jets into the World Trade Center, I wish they had the forethought to think of what they were teaching these assassins.”