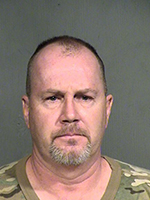 The Maricopa County sheriff sounded off yesterday after a man who identified himself as a “militia Minuteman” was arrested for pointing a military-style assault rifle at a sheriff’s deputy he apparently mistook for a drug smuggler last weekend.

“If they continue this, there could be some dead militia out there,” Arpaio said, according to The Associated Press.

“I have to commend my deputy for not killing this person, which easily could have happened,” Arpaio said. “He’s lucky he didn’t see 30 rounds fired into him.”

The suspect, identified as Richard Malley, 49, of Glendale, Ariz., was booked into jail on a charge of aggravated assault but later released on $10,000 bail pending a court hearing next week.

Malley reportedly was looking for drug runners Saturday night along Interstate 8 near Gila Bend, Ariz., according to various news reports. Maricopa County Deputy Pat Arend said Malley appeared from the side of the road armed with an AR-15 rifle, a .45 caliber pistol and a fixed-blade knife, the AP reported.

Apparently believing he had caught a drug smuggler, Malley pointed his rifle and shined a flashlight at the uniformed deputy. In response, the deputy, pointing to the word “sheriff” boldly printed on his chest, ordered Malley to drop his weapon.

“You aren’t taking my weapons,” replied Malley, according to court records. A second deputy eventually arrived and arrested Malley.

Arend said it is was a miracle that neither he nor Malley was shot in the brief encounter, USA Today reported.

Malley claimed “he had the right to point his rifle at the deputy because he had reasonable suspicion to believe a crime was occurring, court documents say.

Although Arpaio hasn’t openly supported the movement, his virulent anti-immigrant stands and public statements on the topic seem to some to have given validity to various Minuteman groups.

The U.S. Bureau of Land Management, the agency that manages millions of acres of federally owned land in the West, recently warned its agents of the danger to them and the public from heavily armed militia groups in Arizona’s Vekol Valley, where the confrontation occurred.

The various manifestations of the Arizona Minuteman movement have been riddled with violence, crime, controversy and suspicion.

In May 2009, Washington state resident Shawna Forde, co-founder of the Minutemen American Defense organization, recruited two men to rob and kill a man she thought was a drug dealer. The man’s 9-year-old daughter also was murdered. After Forde’s conviction on two counts of murder, other nativist group leaders, including Minuteman Project President Jim Gilchrist, tried to change their public image.

Last year, neo-Nazi  J.T. Ready, who had become sort of a poster boy for the Minuteman movement, went on a murderous rampage in Gilbert, Ariz., killing four people before taking his own life.

And, in July, Chris Simcox, who founded the Minuteman Civil Defense Corps, was arrested in Scottsdale, Ariz., on charges of child molestation.