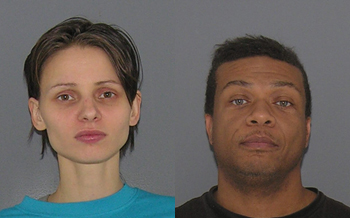 Following in the footsteps of other antigovernment “sovereign citizens,” Robert Carr figured he could take ownership of houses in foreclosure simply by moving in, changing the locks and filing “quiet title” legal papers.

“If you abandon something, you forfeit all your rights and title to it,” Carr told WLWT-TV in Cincinnati, “and title is not a piece of paper. Title is when you grab it and say ‘mine.’”

Prosecutors in Cincinnati did not agree. And neither did a grand jury.

In an indictment returned last Thursday, Carr, 49, was charged with three counts of breaking and entering and three counts of theft for crimes he is alleged to have committed in the Cincinnati suburbs of Springdale and Forest Park. He remains in the Hamilton County Jail under $40,000 bond.

Authorities say Carr tried to steal 11 house in foreclosure. He filed quiet title to at least one in October, claiming that physical possession made it his property. His companion and alleged accomplice, Bethany Firth, 25, was charged with one count of breaking and entering.

It’s not the first time sovereign citizens have attempted to steal abandoned houses. It’s been happening across the country, with greater frequency in recent years as the sovereign movement has gained steam.

“I’m going to object to this whole proceeding,” Carr said during his initial court appearance. “I don’t consent to be identified as what’s named as the defendant.” He told the judge the complaint is false.

“The allegation is you don’t own the property where you were [living],” the judge said in a report on WLWT.

Before his arrest, Carr told a reporter for the station that he has “a team of people” who scour the community for abandoned or foreclosed homes. “I say, ‘Make sure the house is empty. If it’s empty, you know, change the locks.’”

He also puts “no trespassing” signs in the windows of properties he claims. The former owners facing foreclosure and their mortgage companies have no right to claim ownership – but he does, Carr told the station.

“I don’t care about a deed,” Carr said during an interview on the porch of one of the foreclosed homes where he was staying. “I don’t need a deed.”