Among the dozens of apparent victims in Saturday’s tragic mudslide near rural Oso, Wash. – the current official death toll is 16, with over 100 people still missing and unaccounted for – was a man familiar to reporters who covered Snohomish County politics in the 1990s: Thom Satterlee.

Satterlee, 65, and his wife, Marcy, 61, were among the people listed as missing after Saturday’s massive landslide, which wiped out an entire neighborhood next to the North Fork of the Stillaguamish River in central Snohomish County. His granddaughter, Delaney Webb, 20, and her fiancée, Alan Bejvl, 21, were also in the residence at the time of the slide. Satterlee’s home was in the middle of its path, and it remains unclear, as body-recovery efforts continue, whether the family will ever be found. 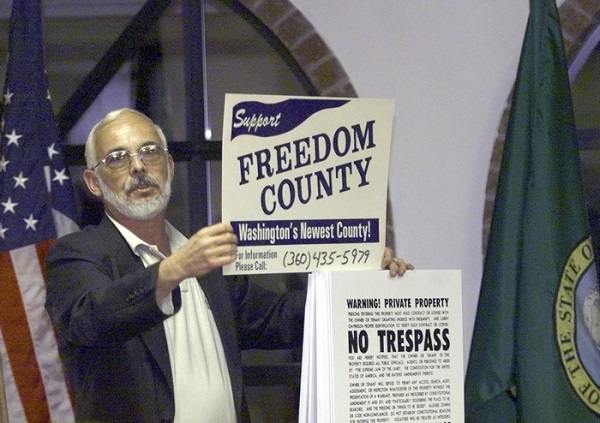 Thom Satterlee became a well-known public figure in the county during the 1990s, after becoming outraged by the passage of the state’s Growth Management Act in 1990. He became involved in the nascent antigovernment “Patriot” movement, which was organizing militias in the region at the time, but Satterlee chose to apply the ideology to local politics: He organized county “secession” efforts that would allow rural districts to break away from dominance by their urban neighbors.

In Snohomish County, the effort was dubbed “Freedom County.” The secessionists were led primarily by three people: David Guadalupe, who had previously been involved with the far-right American Land Rights Association; John Stokes of Camano Island, a onetime real-estate agent who had run afoul of state wetlands laws, and who eventually moved to Montana and became involved in broadcasting Patriot propaganda on the radio there; and Satterlee, who had declared himself a "sovereign citizen" and Christian Patriot. Sovereign citizens generally claim that they are immune to most federal criminal and tax laws.

Their efforts were stifled at the state level by legislators unpersuaded by their arguments. Satterlee and Stokes in April 1997 filed a complaint with the United Nations against Washington for violating the International Covenant on Civil and Political Rights because the state would not create Freedom County: "the right of self-determination and self-government ... are being denied by the state of Washington," the complaint alleged. However, the U.N. informed them that it could not help.

A Superior Court decision ruled that Freedom County did not exist. When Guadalupe and Satterlee appealed to the State Supreme Court, the court commissoner wrote: "Having studied the pleadings filed by Mr. Guadualupe and Mr. Satterlee, which are in the main legally incoherent despite a heavy larding of pseudo-legal rhetoric, I find no basis to grant a stay."

Satterlee was a "common law" proponent who tried to give "legal advice" to similarly ideologically inclined people. For instance, he repeatedly tried to give advice to a tax protester named Floyd Ryan at a hearing in July 1997, prompting the judge to order him to sit down. In a 1995 election he was involved in, he identified himself as 46 years of age, but gave his only occupation as "consultant." Satterlee at one point tried to pay his taxes with checks backed by pseudo-legal "liens" filed against a federal judge in Seattle over his handling of a conspiracy and weapons case against a group of western Washington militiamen.

Eventually, Satterlee’s activities attracted the attention of the FBI, especially after he and his cohorts began threatening to arrest the legitimately elected sheriff, Rick Bart, if he wandered into their territory. They even appointed their own sheriff – a former federal agent himself who now subscribed to sovereign-citizen beliefs and went by the nom de plume Fnu Lnu – but then gradually their activities ceased.

Satterlee was found guilty in 2002 of illegal law practice. He remained active in far-right Patriot politics in the ensuing years, and he and Marcy signed on to a “Liberty Action Committee” forum in 2007.

The Everett Herald noted that during the Freedom County battles, Satterlee had lived in a home farther up the North Fork Stillaguamish, but that he and Marcy had moved into the home on Steelhead Drive about five years ago.

Geologists have said that they had long warned that the Oso hillside was unstable and might unleash a catastrophic slide. Yet county officials continued to issue permits there, even after a 2006 slide in the area acted as a harbinger of the horror to come. Logging was also permitted in the area above the slide.