In the wake of Sunday’s deadly attacks in North Las Vegas, at the hands of two antigovernment “Patriot” extremists, Infowars host Alex Jones warned his listeners that the media would soon start claiming that there’s a connection between his conspiracist media operation and the killers.

As a matter of fact, Jerad Miller – the 31-year-old Indiana man who led the attack, assisted by his 22-year-old wife, Amanda – liked to post on the Infowars member forum. And he constantly promoted Infowars on his Facebook page.

In one of his Infowars posts, Miller even speculated about whether or not he should kill police officers. 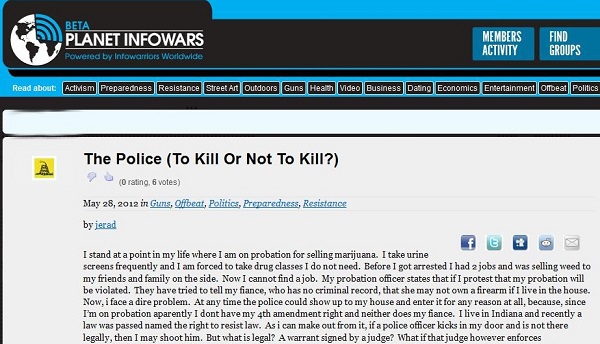 A post by Jerad Miller in the Inforwars member forum

“The emerging narrative in the Las Vegas shooting now includes Alex Jones,” the Infowars site complained shortly after news of the shootings broke. In short order, Jones began calling the shootings a “false flag operation” secretly staged by nefarious federal government operatives who set it up to look like it was a crime committed by domestic terrorists.

“The incident is custom-made to demonize the patriot movement,” the Infowars site claimed. “The Southern Poverty Law Center has consistently attempted to forge a link between white supremacists and members of the patriot and constitutional movements.”

Jones became downright imaginative, explaining to his listeners, in one rant, how he would go about setting up the murders if he were a government agent, and then warning that the shootings mean that “civil war is coming”. He also began assigning responsibility for the “false flag operation.” In one rant, he accused Senate Majority Leader Harry Reid of being behind the crimes. In another, it was the work of President Obama and Facebook CEO Mark Zuckerberg.

Jones' wild claims must be intended to distract from the fact that, as Media Matters reported, Miller avidly posted Infowars links on his Facebook page and urged his readers to the website – saying, in one such post, to “get informed or get stupid”.

What those claims fail to explain is why, beginning in May 2012, Jerad Miller became an Infowars forum member and began posting long pieces there. In all, he appears to have published five posts, though one of them titled “A Short Story About Protesting” is no longer available.

By far the most striking and disturbing of these posts is the May 28, 2012, post he titled: “The Police (to kill or not to kill?).” Most of it is devoted to him explaining at length that he’s mostly a law-abiding citizen who doesn’t steal from people, but police oppression over his marijuana business is driving him to think of violence: “I am like a wild coyote,” he wrote.  “You corner me, I will fight to the death.” He continued:

I feel that I have been violated and tread upon.  That the so called justice system has done me harm.  I do not wish to kill police.  I understand that most of them believe they are doing the right thing.  Yet, I will not go to jail, because I have not committed a crime!  I would rather die than be labeled as a criminal.  Let them call me a terrorist.  Let them label me as a fanatic, some nut job.  I know the truth, and so does God.  I’m sure our founding fathers were labeled as such.

It concluded with what appears in hindsight to be a conclusion:

So, do I kill cops and make a stand when they come to get me?  I would prefer to die than sit in their jail, when I have done nothing to hurt anyone.

Some of the posts are typical conspiracy theorizing of the kind that Infowars specializes in, such as the post that wondered if children’s lung cancer could actually be caused by “chemtrails” from jets. They also are mundane – one complained bitterly about his difficulties obtaining dental care, in part because of his ongoing legal and employment difficulties.

One of the posts, titled “After the Event,” is a short story depicting a conversation between a father and son – who evidently are now capable of levitation – in a post-apocalyptic world, set in the year 2041. The father tells the son about “the event”, when the Earth’s population was decimated (in 2012) by a barrage of meteors and other calamities, while a handful of the wealthy prepared shelters for themselves underground and survived. In the intervening years, it seems, the handful of human survivors have developed tremendous psychic powers that enable them to fly and other things.

The father warns the son that there will be a war in the future with the people who went underground. “Us elders cant predict how long we will live, but we all understand how the world cant go back to the way it was,” Miller wrote.  “It is not the same place and we are not the same people.  We are all equal and nobody rules except the rules.  We are now a people of love and compassion and unity with the earth.  It is our responsibility [sic] to care for everything around us because its in our power to do so.  They would seek to destroy and exterminate and abuse.  They would taint the water as they did before.

“Son, I cant tell you how precious life is,” it concludes.