For more than a decade, a Manhattan Web designer, Robert H. DePasquale, 62, has worked on websites for an influential Jewish artist, an Opera star and various politicians. At the same time, DePasquale led a secret life propagating hate online, building sites for white supremacist groups and posting on hate forums under a pseudonym. 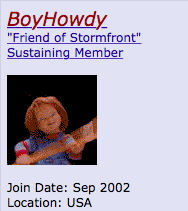 And it wasn’t an idle fascination. Since 2002, DePasquale has posted nearly 20,000 racist and anti-Semitic messages on Stormfront, the largest hate forum on the Web where he is also listed as a sustaining member, a degree of membership that gives him access to a private forum.

Last month, under his Stormfront moniker “BoyHowdy,” DePasquale began cyberstalking a young journalist who is falsely identified as Jewish, posting his photographs, personal information and the address and phone number of his employer on Stormfront. DePasquale evidently believes his victim is an anti-racist blogger who goes by “Spelunker.”

BoyHowdy may well be wrong. His victim, who asked not to be identified, told the Southern Poverty Law Center (SPLC) he is not Spelunker, just someone who is now caught up in the vindictive and racist underworld of Stormfront. Spelunker, who has not revealed his identity to the SPLC, also said that the journalist is not him.

It’s not the first time BoyHowdy has made a boo-boo: In 2007, he identified wrongly that child psychiatrist Dr. William Ayres is Jewish.

When he’s not attacking journalists, though, DePasquale’s favorite topics are how Jews, black people or other minorities are rotten. In 2007, he wrote, “I never go to jewish [sic] doctors. Only European/American doctors! I just don't trust jewish [sic] doctors!” That same year, he described Jews as “that ‘sh*tty’ little group.’” In another, he suggested that protestors at a Jewish event should “bring strips of bacon. Some will probably bring pig’s blood or bacon grease filled balloons.” (Observant Jews do not eat pork).

And he is an activist. In October, he posted “the conference was amazing” about a New York orchestrated by the Greek neo-Nazi political party Golden Dawn. In another post, he explained how to get tickets to see a neo-Nazi band from Croatia playing in New York City.

Interestingly, every one of his posts links to “Free Matt Hale!,” a site that raises money for the former head of the World Church of the Creator who is serving a 40-year sentence for soliciting the murder of a Chicago judge.

Stormfront is definitely not where you want to be listed as an enemy of the white race. As the SPLC documented last April, more than 100 people have been killed by extremists posting on the site. That number includes mass murders like Muslim-hater Anders Breivik, who killed dozens of Norwegian children in 2011, and Frazier Glenn Miller, a rabid anti-Semite who killed three people at Jewish facilities in Kansas earlier this year. The site is a den of lone wolves—and its leader seems unconcerned about our young Jewish journalist’s fate. A voicemail left with the site’s owner, former Klansman Stephen Donald “Don” Black, about this matter and pointing out that the information posted about the Maryland journalist may well be incorrect went unanswered.

In addition to a heavy online presence, DePasquale is a bit of a website mover and shaker in white supremacist circles. Using skills garnered through his computer science and math degree from the State University of New York, Empire State, DePasquale has served as a senior moderator and webmaster for the racist American Freedom Party (AFP), which is led by avid segregationist William D. Johnson. He built the websites for two racist political candidates. He has also been listed as a point of contact on other hate sites such as thewhiteamericanvote.com and sites related to AFP. And he is a fan of many other extremists groups, having written on Stormfront that he came to that forum after hearing about it from the neo-Nazi National Alliance (whose mailing list he was on). 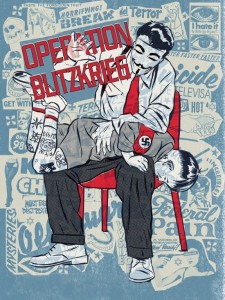 It is his association with AFP that allowed the SPLC to identify BoyHowdy as DePasquale. In 2012, AFP was hacked by Anonymous during its Operation Blitzkrieg, which targeted white supremacist sites. In the hacked documents, “BoyHowdy” is described as a former AFP webmaster named Robert H. DePasquale who lives in a pricey apartment on Manhattan’s Upper West Side.

After the AFP hack, DePasquale, using an Ohio law firm and his real name, demanded that the information disclosed be pulled down from Freedom Fighter Radio. The site identified “Robert H. DePasquale” as the AFP’s webmaster. Websites reporting on the hack repeated the information that DePasquale ran the group’s site.

That BoyHowdy and DePasquale are one and the same is also made clear in the AFP emails. A February 2011 email written by Jamie Kelso, one of AFP’s directors, points out that his webmaster at the time was the same BoyHowdy who posted with that name on Stormfront. Replying to someone asking about a possible connection between the two, Kelso wrote, “And yes, it’s the same BoyHowdy. Please don’t be shy about PMing to BoyHowdy to tell him exactly what you just messaged to me about…Guys like you and Howdy deserve ten times the thanks you get.” In the hack, emails from BoyHowdy’s account are signed by “Rob” or “R!” and he is identified as “Rob from New York” at times. In another post, someone writes to DePasquale, “You have done a great job for years on SF [Stormfront], glad you are here!” And in another post, DePasquale himself confirms he has posted on Stormfront.

Also in 2011, an email exchange between DePasquale and Kelso discusses DePasquale’s efforts to build the campaign website for then Republican candidate for congress, Jim Russell (Russell’s racism was uncovered during the campaign and he was defeated). In the post, DePasquale wrote, “[Russell] was with us at the Museum trip in Manhattan. He lost after a smear campaign by jewish [sic] politicians that included former Mayor Ed Koch…Best regards. R!.” A Village Voice article about the white supremacist museum visit, which was organized by Kelso, quotes BoyHowdy as one of the participants. DePasquale also built the website for racist candidate Harry Bertram, where he is still listed as the contact.

Regardless of the evidence to the contrary, DePasquale, in an email exchange with SPLC that was sent to both his BoyHowdy identified email account and one that includes his real name, claimed, “I do not post on [sic] Stormfront web site” and denied any knowledge of the man identified as the blogger Spelunker there. The email also listed this writer’s home address and asked why someone living in Alabama “would be interested in the free speech activities of someone in New York City?” A reply to the email explaining the evidence above went unanswered.

But as it turns out, DePasquale has at times affiliated himself with extremism using his real name. He did so in 2011 on a petition page against Israel, which demanded that the U.N. declare Zionism as racism and described it as “an apartheid philosophy.” It is more than ironic that a raging racist would make such a demand. The petition’s URL includes the numbers “88,” which in neo-Nazi code stands for “Heil Hitler” because “H” is the eighth letter of the alphabet.