Brandon Curtiss built his '3% of Idaho' into the state's leading antigovernment organization, but it all came tumbling apart this week when his mountain of dubious financial dealings caught up with him.

As he has emerged over the past couple of years as the leading figure in Idaho’s antigovernment movement, Brandon Curtiss has cultivated a straight-talking, square-dealing public image with both the public and the followers of his 3% of Idaho organization. 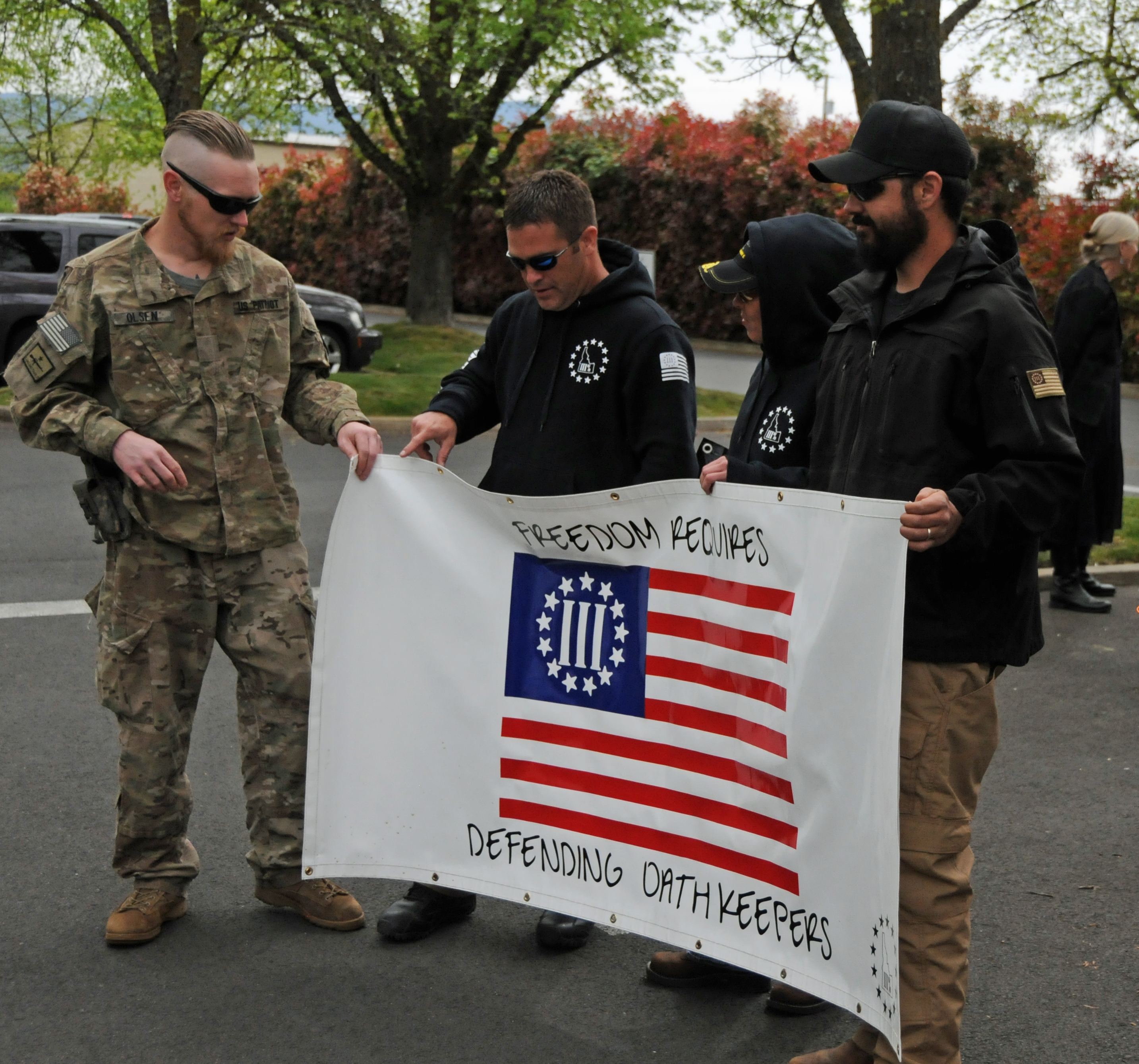 That image, however, collapsed like this week when a large and prominent group of his followers – including his former vice president and longtime cohort in the organization, Eric “EJ” Parker – announced their resignations from 3% of Idaho. The group of 36 members were angered over his reported misappropriation of funds raised to help the defense of four Idahoans, notably Parker himself, by federal authorities over their respective roles in two federal lands standoffs led by Cliven Bundy and his two sons in Nevada and Oregon.

According to the Idaho Statesman, some of the members were able to gain access to the PayPal website page and bank accounts for the organization’s “Freedom Fest” concert, held as a fund-raiser for four “political prisoners” – Parker, 32, of Hailey, Steve Arthur Stewart, 36, of Hailey, O. Scott Drexler, 44, of Challis and Todd Engel, 48, of Boundary County – arrested on charges related to the Nevada standoff in April 2014 in Bunkerville, Nev. What they discovered was a steady outflow of funds from the account for Curtiss’ personal use, including:

Already before the $2,475 in funds from the concert were deposited, the account was overdrawn some $567, mostly from Curtiss’ personal use, which was immediately withdrawn. When one former member observed this and objected to Curtiss, according to the Statesman, she was dismissed from the organization.

“Many of us, in one way or another have worked toward, contributed to, donated for, and sacrificed our time, hope, energy, and resources to help these men in their hour of need,” wrote the departing members in an official statement. “It is with heavy hearts that we, the undersigned, do solemnly testify to you that we believe that substantial portions of these gifts have been grievously misused within the Idaho III% organization. We do not put forth this accusation lightly, or without due diligence and proper deliberation ad nauseum.”

3% of Idaho issued a statement Thursday calling the revelations a "smear campaign" and asserting that a promised audit of the group's finances would demonstrate that funds were not mishandled. It also claimed that the group had raised much more money for the prisoners than what had been raised at the concert, and that those funds had been spent on their defense. 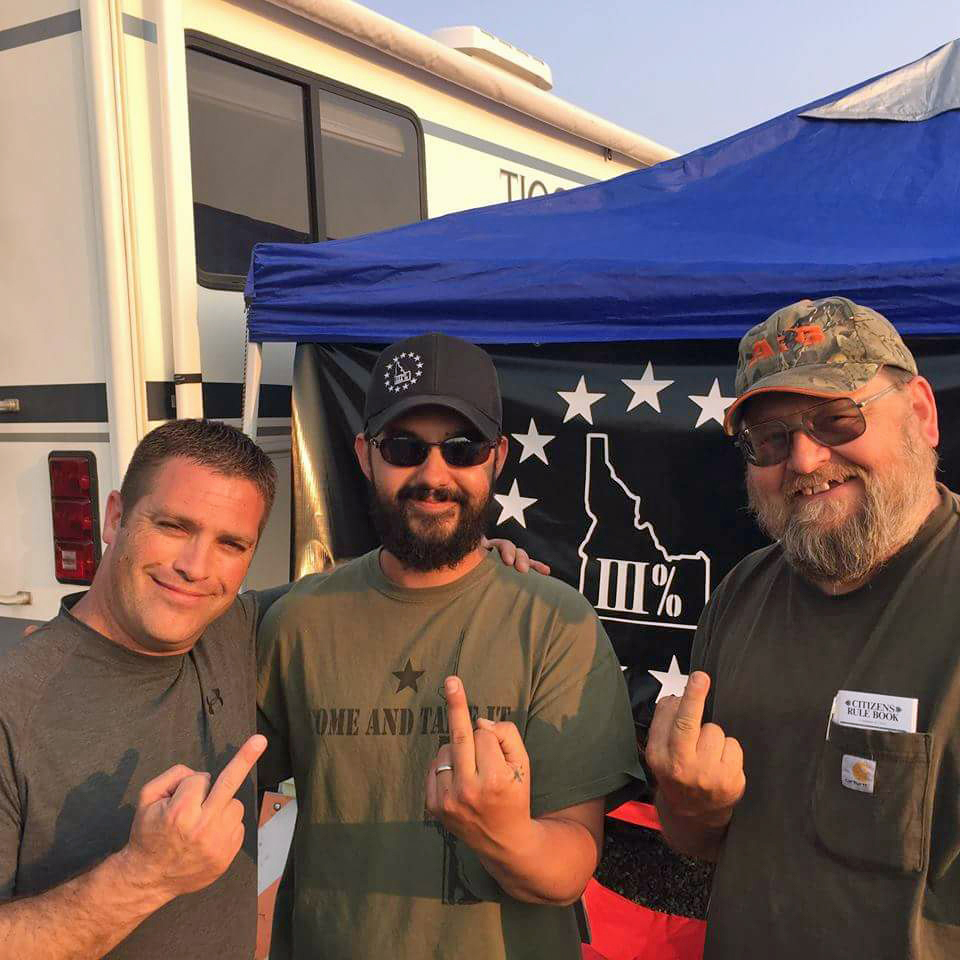 Curtiss, left, and Parker, center, with Sugar Pine Mine co-owner Rick Barclay, expressing their view of the mainstream press.

Curtiss has been nothing if not imaginative in building 3% of Idaho into the state’s leading “Patriot” group, with a membership he claims has reached over 1,000. They joined arms with antigovernment Oath Keepers to participate in a protest and attempted armed standoff with federal authorities at the Sugar Pine Mine near Grants Pass, Ore., in the spring of 2015, and did similarly with another mine protest in Montana later that summer and fall. His “Threepers” also showed up with Oath Keepers to stand guard outside military recruiting offices in Idaho, and became heavily embroiled in the controversy in the Twin Falls area over Muslim refugee resettlement, leading a large protest against the refugees in November 2015. They then showed up to protest an even larger rally supporting the refugees later that month.

But Curtiss became an even more significant figure in January 2016 when he helped organize a protest in Burns, Ore., against the imminent incarceration of two local ranchers, which afterward morphed into the armed takeover of the nearby Malheur National Wildlife Refuge by Ammon and Ryan Bundy and their cohort of several dozen militiamen. While his 3% group did not endorse the takeover or participate in it directly, Curtiss later led a contingent of armed militiamen back to Burns to briefly act as “a buffer” between the standoff participants and federal authorities, but returned to Idaho after less than a week.

When four of their fellow Patriots, including Parker, were arrested in federal sweeps after the Malheur standoff ended, Curtiss’ group organized a mass protest of the arrests on the Statehouse steps in Boise, which was later followed by concert fund-raising event in Twin Falls. Parker made a national name for himself by being photographed aiming a sniper rifle in the direction of the federal agents and other law enforcement officers who were attempting to execute a federal court order directing the Bureau of Land Management to round up Bundy’s cattle in Bunkerville, and has been charged in connection with that.

However, clouds of concern had already begun to hover over Curtiss for his dubious business dealings. After an interview in the Oregonian raised questions about his property management and real estate business in Meridian, the Statesman uncovered a long history of personal bankruptcies and questionable business dealings. Curtiss, it emerged, had already filed twice for bankruptcy, first in 2001 and then again in 2009. After returning from Burns, he filed for bankruptcy a third time, having racked up $235,000 in debt since 2009.

Then, earlier this month, the Statesman reported that Curtiss had been fined $7,200 by an Ada County judge for having failed to carry workers’ compensation insurance for his employees. The state police, it reported, also was opening an investigation into claims from 17 of Curtiss’ clients that he owed them money.

Curtiss, who had since moved from Meridian to Fruitland, told the Statesman in an email that he had shut down his business. “We are in the process of winding down and will make all efforts to fulfill any outstanding obligations,” he wrote.

The latest financial eruption around Curtiss, however, has created a wave of disappointment among his former followers.

“What bothers everyone the most is seeing how much money was spent in such a reckless manner, when it was supposed to go to our political prisoners. These four families are fighting a battle against the government and have now been betrayed,” a former member told the Statesman.

However, at the Facebook page of Curtiss’ girlfriend, Brooke Agresta, there was a post warning that anyone disseminating the group’s bank information would face legal consequences, citing Idaho Code: “Anyone, and I mean anyone, in possession of or intentionally handing out bank statements, PayPal statements, or that has accessed any accounts of another person or organization in relation to the Idaho 3% will be prosecuted to the fullest extent of the law.”

The Statesman noted, though, that the relevant portions of the law cited in the post do not support her claim.