BERKELEY, California — Antigovernment extremists stood shoulder-to-shoulder with "alt-right" extremists and anti-feminists. Nearby, a ragtag mix of Trump supporters were draped in American flags and decked in helmets stickered with images of Pepe the Frog, the popular cartoon frog meme employed by the white nationalist “alt-right.”

They carried clubs and medical kits, radios and reinforcement in the event of violent skirmishes that have shaken the University of California, Berkeley campus. But by Thursday’s end, the next chapter in what Richard Spencer has called “The Battle of Berkeley” was a bust.

Police arrested two people at the "free speech" event in Berkeley, California — one for wearing a mask and another for carrying a knife. But the tensions that have descended on the campus — turning it into a focal point in the ongoing conflict between the white nationalist alt-right and the antifascist “Black Bloc” activists — were reduced mainly to screams and shouts as anti-Trump protesters gathered in small number.

Those standing in support of President Trump and free speech, numbering in the hundreds, gathered at Martin Luther King Jr. Civic Center Park in downtown Berkeley, where they eagerly waited antifascist protesters that never came. Stewart Rhodes, the founder of the Oath Keepers, an antigovernment extremist organization comprised of current and former military and police personnel, brought members of his group to provide security. 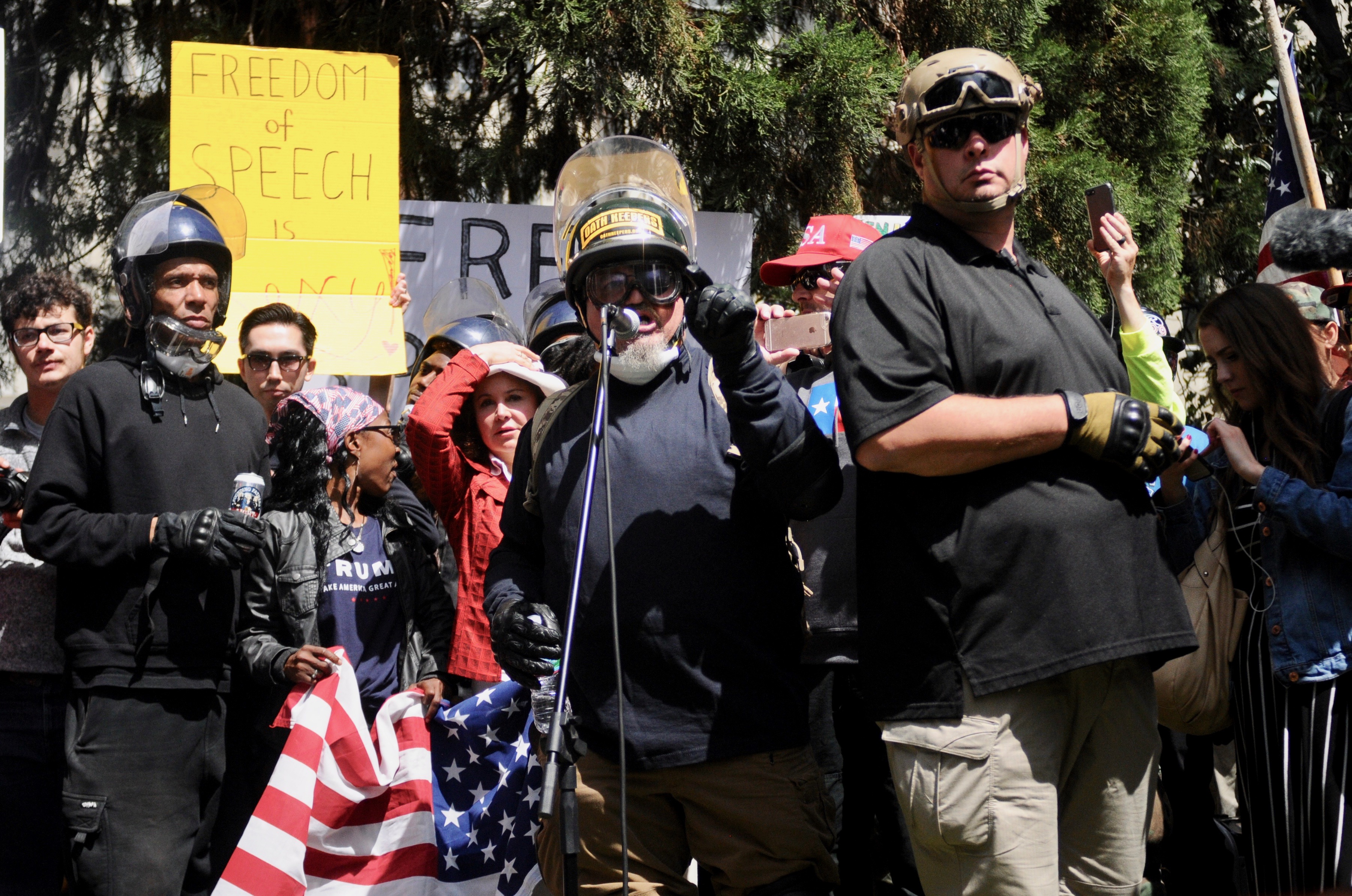 “This is ground zero in the defense of the Constitution and the most important part of it — the First Amendment. If you don’t have the right to free speech and assembly, you are not free,” Rhodes said, addressing the audience over a public announcement system.

Rhodes, whose Oath Keepers are animated by a number of antigovernment conspiracy theories, told the audience that the Berkeley Police Department, whose heavily armed presence at the gathering was unavoidable, was working in coordination with Oath Keepers.

“Guess who are the cop killers. Who wants to kill the police,” Rhodes said. “You know who they are. They’re right up the street in black masks. And these officers know it.”

The protest came as a response to the university cancelling a planned speech by conservative commentator Ann Coulter, who promised to come anyway. Two conservative student organizations, the Young America’s Foundation and the Berkeley College Republicans, filed a federal lawsuit on Monday. Citing a fear of violence, the groups later pulled their backing for Coulter, who ultimately cancelled her speech altogether.

“I’m very sad about Berkeley’s cancellation, but my sadness is greater than that. It is a dark day for free speech in America,” Coulter said on Twitter.

As the birthplace of the free speech movement decades ago, the debate surrounding Coulter’s speech put Berkeley in the precarious position of protecting its staff and students while ensuring freedom of speech, especially in a political climate where the possibility of violence between alt-right extremists and antifascist protesters becomes more frequent. Two previous appearances by far-right and conservative speakers have turned violent at Berkeley, including a protest on April 15 that left 11 people injured and six hospitalized. Police arrested 21 people on a variety of charges then.

Lawrence Rosenthal, chair and lead researcher of the Berkeley Center for Right-Wing Studies, issued a written statement on the day’s events. Rosenthal warned people not to be cowed by the alt-right’s claims of censorship and noted that the university had two concerns to consider in cancelling Coulter's appearance — the unequivocal support of free speech and security.

“The situation at the University of California does not conform to the claims of suppression of free speech that conservative politicians and commentators have been trying to tie it to. Neither student groups nor the University administration are responsible for the threats of violence that surround Ann Coulter’s proposed appearance on this campus,” Rosenthal wrote.

Rosenthal also criticized Spencer for “exalt[ing] in the violence,” as he did in a YouTube video recounting the event.

“The deepest significance of the ongoing ‘Battles of Berkeley’ is the attempt by the alt-right to move the country toward fascist-anti-fascist violence,” Rosenthal said. “Conservative politicians and commentators wishing to use the Berkeley situation as a cudgel in the name of the free speech run the risk of enabling the dark goals of the alt-right.”