On March 14, the Alabama House Judiciary Committee failed to advance SB7, a bill that would “provide for expanded civil liability for injuries resulting from acts of terrorism.”

SB7 is similar to the model anti-Muslim legislation known as Andy’s Law, a bill that is now on the books in seven states: Arkansas, Florida, Kansas, Louisiana, North Carolina, Oklahoma and Tennessee.

Andy’s Law is part of a suite of anti-Muslim legislation that includes anti-Sharia bills and some forms of legislation focused on Female Genital Mutilation (FGM) that in reality serve as a vehicle to demonize and criminalize Islam as well as American Muslims. We know this because the source and “grassroots” support of these model bills often come from anti-Muslim hate groups and because the legislation is ultimately redundant: there are already laws that provide for civil suits against perpetrators of terrorist acts; FGM is criminalized federally; and no foreign law, including Sharia, can usurp the U.S. Constitution.

Anti-Muslim extremist and attorney David Yerushalmi — the godfather of anti-Sharia laws — has been explicit about this strategy:

What is Andy’s Law?

Named after Army Pfc. William Andy Long who was killed in 2009 by an individual inspired by Al-Qaeda in the Arabian Peninsula, “Andy’s Law” creates a civil cause of action against a person or persons either directly or indirectly involved in a terrorist act. In essence, the victims or families of victims of a terrorist act can sue in a civil court for damages against those who provided material support for the act.

If passed, Muslim businesses and even houses of worship could get dragged into potential lawsuits, something that would certainly have a chilling effect on American Muslim commercial and civic life. For example, if an imam was charged criminally, under Andy’s Law, a suit could potentially be filed against the mosque that employed him.

Some of the model legislation also would provide “treble damages” if the plaintiff wins the suit, meaning the court could triple the actual amount of damages awarded.

The anti-Muslim roots of Andy’s Law

Andy’s Law is a product of the established anti-Muslim movement in the United States. The model legislation was drafted by the anti-Muslim hate group American Public Policy Alliance (APPA), headed by the Louisiana-based Stephen Gelé. APPA is also a major proponent of anti-Sharia legislation.

A simple Google search of Andy’s Law shows that anti-Muslim hate groups in the United States are the only ones pushing this legislation. The first two results direct you to the website of ACT for America, a hate group headed by Brigitte Gabriel with around 50 active chapters nationwide. Another hate group, the Center for Security Policy(CSP) also appears on the first page of Google results for Andy’s Law. CSP pushes anti-Muslim conspiracy theories including claiming the Muslim Brotherhood has infiltrated all levels of government and warns that “creeping Sharia,” or Islamic religious law, is a threat to American democracy. 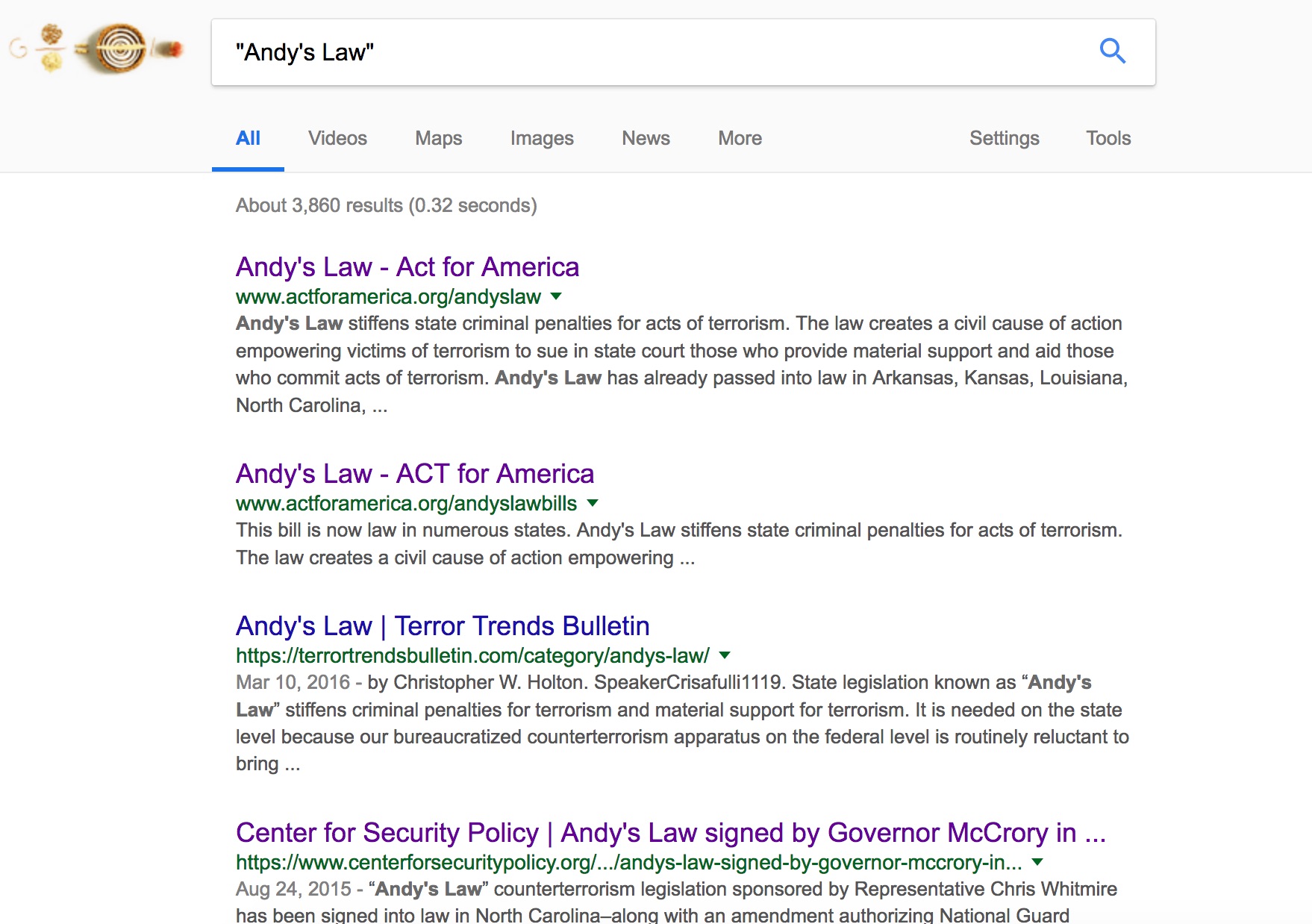 Through a FOIA request, the Southern Poverty Law Center received over 150 pages of correspondence pertaining to Andy’s Law between anti-Muslim hate groups and legislative aides in Florida, the most recent state to pass the law. The emails show in detail how Gelé and APPA provided legislative aides with model legislation and answered technical and legal questions. In one email, Gelé described his justification for passing such a law:

Andy’s Law typically includes a definition of terrorism and a definition of material support of terrorism. The “lone wolf” shooter or the suicide bomber often lacks assets worth pursuing in a civil suit. However, the persons and organizations that supported the terrorist may have the resources to compensate the terror victims.

CSP also had a major role in the bill’s passage. Christopher Holton, CSP’s vice president for outreach, acted as the bridge between Gelé and legislative aides. He also provided talking points and testimony in support of the bill.

CSP, ACT and APPA are hardly the only groups in the anti-Muslim circuit promoting Andy’s Law. Back in 2013, the anti-Muslim hate group Clarion Project wrote a piece titled, “Taking Action: State Initiatives to Combat Islamism in the U.S.,” that called for Andy’s Law to be enacted in more states.

People in your community who work with state legislators should work to ensure the American Laws for American Courts (ALAC) and Andy’s Law become law in your state, and get police and local leaders trained so they can use these laws, especially Andy’s Law, to bring criminal and civil hammers on jihadi organizations in your area, like the Muslim Students Association, Islamic Societies, and Islamic centers.

Andy’s Law in comparison to other anti-Muslim legislation

There are remarkable similarities between the origins and the tactics used to get Andy’s Law and other anti-Muslim legislation passed. Yerushalmi, who also serves as CSP’s in-house attorney, is largely credited with designing the model anti-Sharia legislation known as American Laws for American Courts (ALAC). Previous Hatewatch investigations through FOIA requests and other means have mapped out in detail how Chris Holton and local chapters of ACT for America have worked hand in hand with lawmakers during every step of the legislative process. The same goes for some types of anti-FGM laws, such as one introduced in Maine this year that was wholeheartedly endorsed by the local ACT for America chapter, who worked directly with legislator Heather Sirocki in her effort to pass a bill.

Hatewatch spoke to Khurrum Wahid, a Miami-based partner at Wahid Vizcaino LLP about Andy’s Law and other anti-Muslim legislation. When asked why anti-Muslim organizations were pushing these laws, Wahid said:

There’s really nothing new here, it’s just that they now can go to court and point the finger at someone and say ‘you’re a terrorist.’ And more importantly, they can push out in the news and in the media and in other ways to try to torch somebody who might otherwise be seen as leadership in the Muslim community and silence those voices. So there is a very, I think aggressive effort to chill the voices of Muslims, Muslim leadership, advocacy groups and this is quite frankly clearly one of those ways.

In the case of Andy’s Law, Wahid also pointed to the Pulse nightclub shooting as an example, noting that in Florida, even without the proposed law on the books, the families of victims could have sued Omar Mateen’s estate for damages.

Not surprisingly, the same elected officials that have introduced anti-Muslim legislation in the past are now focusing their efforts on passing Andy’s Law. In Alabama, SB 7's sponsor was Senator Gerald Allen, a man who sponsored and co-sponsored anti-Sharia legislation in 2011, 2012, and 2013. Allen's legislative activities aren't just focused on Muslims; in 2011 and 2014 he sponsored anti-immigrant and voter suppression bills. In Florida, elected officials who tried four times to get an anti-Sharia bill passed, turned their focus to Andy’s Law. Wahid told Hatewatch that all of the rhetoric used during the debate over Andy’s Law was “Muslim Brotherhood, Muslim Brotherhood, Muslim Brotherhood.” Attempts to tie American Muslims to the Muslim Brotherhood is one of the most common scare tactics used by anti-Muslim groups, in particular, CSP.

Anti-Muslim legislation like Andy’s Law serves virtually no legal purpose. Rather, it’s another legislative and media strategy aimed at stigmatizing and intimidating American Muslims. “I think it goes directly to the heart of what these bills are really about,” Wahid told Hatewatch, “They aren’t about securing America.”