For awhile, the ‘alt-lite’ media organ has played coy with white nationalism — but now it appears the façade is fast crumbling.

It was only a subtle shift in coverage, but a momentous one nonetheless.

From the outset, Breitbart News’ expansion of its operations into Europe — which was announced in fall 2016, even before the election of Donald Trump, but began in earnest with the opening of news bureaus immediately thereafter — was openly sympathetic to Europe’s burgeoning right-wing movements, particularly various stripes of nationalist movements taking root in the United Kingdom, Austria, Hungary, Germany, and elsewhere.

However, much like its American operations, Breitbart’s European coverage mostly has stopped short of any outright embrace of explicit white nationalist movements. Indeed, Breitbart is often dismissed by the alt-right as the chief exemplar of the “alt lite” — sympathetic to the alt-right’s agenda, but unwilling to join the white-nationalist cause explicitly.

In its coverage of the European far right in recent weeks, however, there has been an observable shift at Breitbart.com to an outright embrace of white-nationalist “Identitarian” movements across the Continent. And that in turn has meant that propaganda from these movements has been transmitted whole to its readers across all its platforms, including the U.S. and elsewhere.

For most of its history, Breitbart’s news coverage overall has tended to be rife with pieces supporting the far right’s narrative about immigration, race, crime, terrorism, and Islam — that is, articles depicting immigrants and Muslims as criminals and terrorists, suggesting that nonwhites are more crime-prone, and that whites are under siege from a tide of nonwhites. It has soft-pedaled bigoted white-nationalist organizations as “pro-white” and “anti-mass migration” – while in their comments sections, outright neo-Nazi rhetoric is not only permitted but celebrated.

However, explicit white nationalists such as Richard Spencer and neo-Nazis like Andrew Anglin and their respective ideologies have been personae non grata at Breitbart’s website and in its news coverage. This has earned Breitbart and other members of the “alt lite” the racist far right’s contempt, but so far has proven successful in maintaining a veneer of respectability and viability for its operations.

Its European operations have mostly followed the same blueprint, though at times it has come closer to embracing explicit white nationalists, mainly by soft-pedaling the nature of their organizations. The result has been a pattern of promoting Identitarians without divulging the ideology behind them.

The shape of Breitbart’s resulting European coverage has been an Identitarian’s dream:

The European Identitarian movement, much like its American counterpart, is fundamentally white nationalist in its ideology, rhetoric, and agenda, but in contrast to the U.S., where a single national identity is the goal, the “nationalist” component in a multinational continent means a broad array of national chauvinisms both aligning and competing. That means disparate far-right movements not just in the UK, France, and Germany, but also in Italy, Sweden, Norway, the Netherlands, Italy, and Greece, not to mention Hungary, Austria, and Poland, where far-right nationalists appear to have gained control of their respective governments. 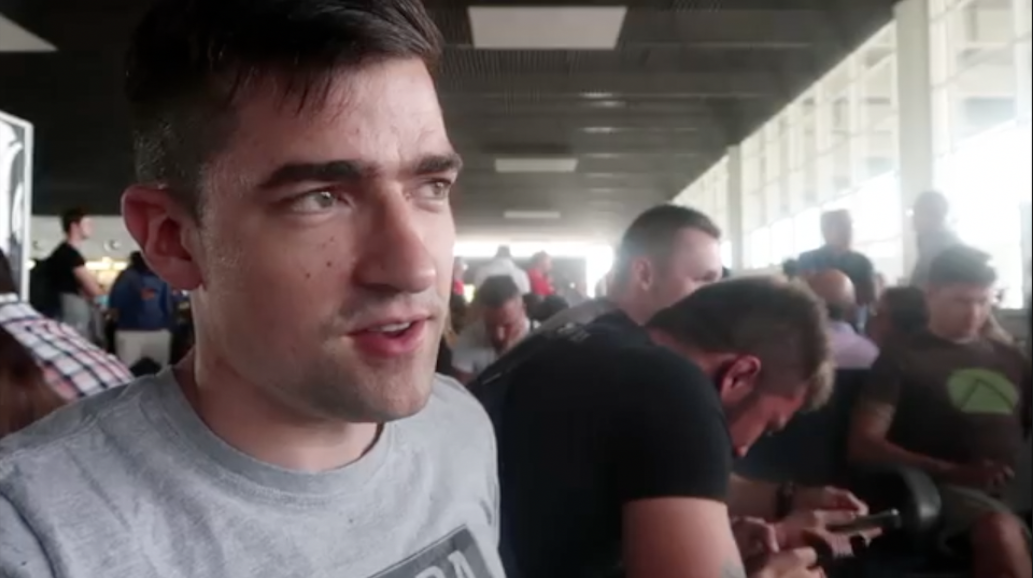 Martin Sellner, waiting for the C Star in Cyprus. Image from video.

Yet in spite of the wide-ranging nature of the movement, its leaders have managed to link arms in strident antipathy to immigration and multiculturalism that has led to electoral gains in legislative bodies throughout Europe. The organization intended to unite the Identitarian movement, Generation Identity, has gone through fits and starts, but is generally seen as gaining ground among working-class European youths. The Identitarians’ leading young ideologue is Austrian nationalist Martin Sellner, who is fond of Greenpeace-style street theater and public stunts, such as draping a gigantic black niqab, an Islamic face veil, over the statue of the Habsburg Empress Maria Theresa in Vienna’s city center.

Sellner uses soothing rhetoric: “We see ourselves as patriots, not neo-Nazis,” he says. “We don't hate immigrants. But we also don't want to see the country change and end up minorities in our countries. We wanted to express this opinion without anti-Semitism, without the racism of the old right.”

And yet, in action, Identitarians have practiced a distinctly vicious brand of activism. As The Economist noted: “In Germany identitarians describe immigration as ‘nation death’; in France they speak of ‘pureblood Frenchmen’. They have marched alongside skinheads at anti-Islam rallies in Dresden and put a chain-lock on a Muslim school in Rotterdam.”

The ugliness manifested itself last summer, when Identitarians organized a project intended to unify the movement internationally called Defend Europe, which proposed to send a ship to blockade search-and-rescue missions for refugees fleeing war-torn Syria across the Mediterranean. According to their website, the Identitarians intended to use the ship to intercept refugees and return them to the Libyan coast, as well as to cause the search-and-rescue ships to alter their routes and drain the charities funding them of financial and organizational resources. They also hoped to “disrupt the human trafficking rings by sinking the abandoned boats they leave behind” and “offer the Libyan Coastguard [their] support as [a] recon-ship,” as well as to “weaponise the internet” by enlisting the users of the alt-right-dominated 4chan.org/pol/ forum to help track the Non-Government Organization (NGO) ships’ movements.

Leading much of the coverage of the project was Breitbart News, which ran flattering articles about the Identitarians’ early attempts at blockading rescue ships, and helped promote Defend Europe’s fundraising campaign (which eventually raised about $50,000), as well as its plan to enlist Internet-based “trackers.” However, when the Identitarians’ ship was detained in a Cyprus port and several crew members arrested and subsequently deported for forging documents and engaging in potential human trafficking, Breitbart and the project’s alt-right supporters – including such “alt lite” figures as Lauren Southern, Brittany Pettibone, and Katie Hopkins – all fell curiously silent. (Later, Breitbart ran a couple of articles licking their wounds, first claiming that a “Soros funded” NGO had ordered fishermen to block the Defend Europe ship; and later ran a piece crediting a decline in drownings in the Mediterranean to the Defend Europe campaign.)

Last fall, the U.K.-based anti-hate organization Hope Not Hate published a report revealing that Jack Hadfield, a politics student and Breitbart contributor, was the administrator of an alt-right Facebook group featuring virulently sexist, racist, and anti-Semitic posts as regular content, along with posts voicing support for far-right groups. 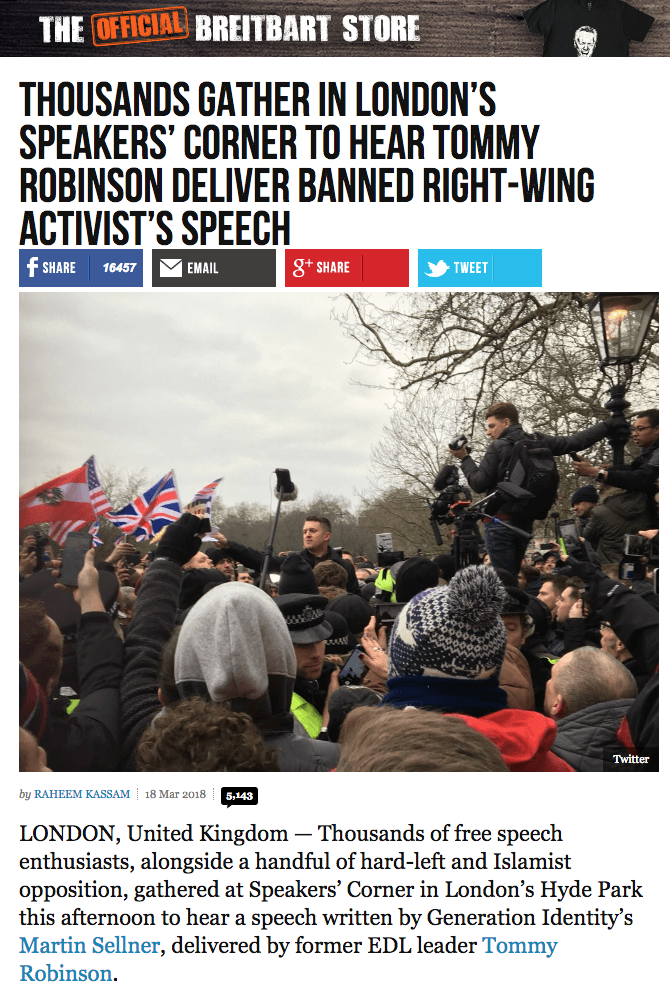 Breitbart's headline for its coverage of the Robinson/Sellner speech in London.

Breitbart’s embrace of Identitarians, however, reached a new level over the past few weeks, fueled by an Identitarian rally led by Tommy Robinson, founder of the nativist English Defence League, scheduled for downtown London on March 11. Sellner, who was slated to be the featured speaker, was denied entry into the country by British border guards, as were Southern and Pettibone. (U.K. officials tartly reported that the three were denied entry because “their presence in the country was not conducive to the public good.”)

Breitbart News complained bitterly about the refusals, as did other right-wing media figures: Tucker Carlson held forth on Fox News in an impassioned defense of Southern and Pettibone, describing them to his audience as “conservatives,” and turned to Katie Hopkins for her thoughts: “It seems…that being white is considered wrong, being Christian is considered wrong, Trump is wrong,” Hopkins told Carlson. “To be Islamic is right, to welcome back jihadis is right, we shouldn’t prosecute them, we should embrace them. It’s really getting to a point here in the U.K. when we’re up there on the endangered species list. To be a white, Christian, conservative woman like myself, I’m right up there on the endangered species list…up there with the black rhino — and the black rhino’s got an advantage because he’s black.”

Breitbart’s ensuing coverage, however, was the most striking: In its report on the rally at London’s Speakers Corner, it ran verbatim the text of Martin Sellner’s prepared speech, as it was read aloud by Robinson at the event. “There has always been immigration in your history,” he read. “People coming in, assimilating. But what’s happening today is different: You are being replaced by massive Muslim immigration.”

The coverage, naturally, ran not just on the front page at Breitbart London but at the larger, U.S.-based Breitbart News site as well. Moreover, Breitbart’s open embrace of the rhetoric of European Identitarians didn’t end there: More recently, it ran the full text of a speech by Hungary’s far-right prime minister, Viktor Orban, warning that “mass migration” posed a threat to “women’s rights,” which enjoyed similar placement.

The embrace of European Identitarianism bodes ill for Breitbart’s general coverage. “I think it is a bit shocking to have full-on racial propaganda and groups in the Identitarian movement being treated as legitimate by Breitbart,” observed Heidi Beirich, director of the SPLC’s Intelligence Project.

Beirich notes, for instance, that the ideology and agendas espoused by European Identitarians is essentially identical to that espoused by Richard Spencer and their American white-nationalist counterpart. “It is just white nationalism cloaked in weird Euro language. When I did a site search on Breitbart for Identitarian I found lots of stuff, so they are spreading white nationalist material far and wide.”

The arc of Breitbart’s increasingly close relationship to the European radical right traces that of their former executive chairman, onetime Trump presidential adviser Stephen Bannon, who championed Breitbart’s European expansion early on. Since his dismissal from the White House in August 2017, and his subsequent falling-out at Breitbart in January, Bannon has become increasingly active in Europe, promoting Identitarian and other nationalist causes.

Earlier this month, he praised the “populist revolt” in a Zurich speech, and then spoke to the annual congress of France’s nativist National Front party, praising leader Marine le Pen, and advising the crowd: “Let them call you racist. Let them call you xenophobes. Let them call you nativists. Wear it as a badge of honor.”

However, since Bannon left Breitbart under a cloud earlier this year, both sides have made it clear that they have nothing to do with each other (though, as Media Matters reported, the extent to which Bannon is actually gone from their operations is not entirely clear). Breitbart’s final swing to the far right and Bannon’s both apparently have more to do with sympatico ideologies than anything else.

It’s not entirely clear, however, how successful this hard-starboard swing in coverage will be for Breitbart. Politico recently reported that Breitbart’s readership numbers have recently plunged without Bannon at the helm, with nearly half its usual audience apparently abandoning ship. It might be coincidental – but it may be that their readers are speaking with their feet.