Benvie was arrested June 21 in Guthrie, Oklahoma, after a warrant was issued by the U.S. District Court of New Mexico. Benvie was indicted on two counts of impersonating a U.S. border patrol officer while a member of UCP after an online video surfaced of him yelling orders to migrants saying: “Alto! U.S. Border Patrol, what are you guys doing? You guys from Guatemala?”

Benvie posted bond June 25 and was released in New Mexico on the condition that he avoid contact, directly or indirectly, with anyone “who is or may be a victim or witness in the investigation or prosecution.” The conditions for Benvie’s release explicitly mention avoiding contact with members of the extremist group United Constitutional Patriots and Guardian Patriots, an offshoot he founded. 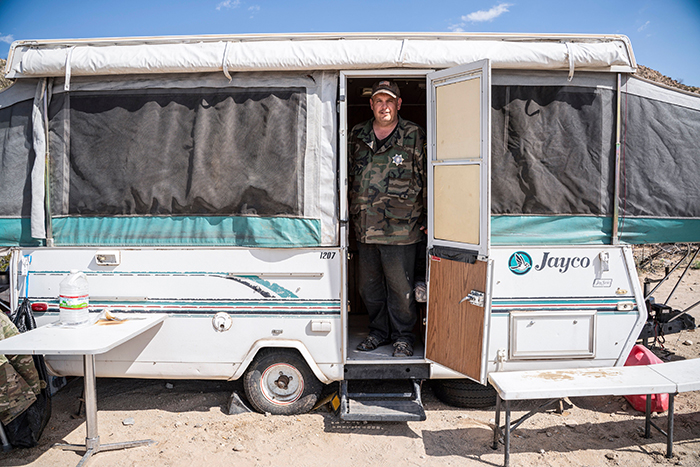 Since his release, Hatewatch has learned that Benvie has had contact with at least one individual with former ties to United Constitutional Patriots and a second individual with ties to Guardian Patriots.

The downfall of UCP

UCP first received a flurry of attention in April, when the American Civil Liberties Union (ACLU) called for an investigation into the “unlawful arrests” of migrants at the New Mexico border. UCP members reportedly detained more than 300 people near the border while donning firearms and fake badges. The leader, Larry Mitchell Hopkins (aka Johnny Horton Jr.), regularly posted videos to social media where members could be seen questioning migrants on the outskirts of Sunland Park, New Mexico.

“It’s pretty clear from watching those videos that the folks that make up this group view immigrants as something less than human beings,” said Peter Simonson, executive director of ACLU of New Mexico.

On April 20, Hopkins was arrested by the FBI for allegedly being a felon in possession of a firearm. Shortly thereafter, UCP faced another setback when The Young Turks reported that UCP member Steve Brant, code-named “Viper,” filed an April 24 police report with the Sunland Park Police Department about fellow member Armando Gonzalez having allegedly made “terroristic threats.” According to Brant, Gonzalez openly expressed his desire to shoot migrants and to “go back to Hitler days and put them all in gas chambers.”

On Nov. 13, Benvie, who currently resides in halfway house in Albuquerque, New Mexico, called into a rightwing YouTube channel run by fellow Guardian Patriot member Lawra Sharpe-Ulvog. Benvie proceeded to take part in a 90-minute interview that concluded with him saying he planned to set up another Facebook page with help from Sharpe-Ulvog. In the last few minutes of the video, Benvie can be heard telling Sharpe-Ulvog, “I’ll keep you updated.” Sharpe-Ulvog ends the video by telling her viewers that she knows where Benvie is located and can easily get him on the line again.

Sharpe-Ulvog got her start with UCP but switched to Guardian Patriots following Benvie’s departure from the former group. Like Hopkins and Benvie, Sharpe-Ulvog frequently dabbles in far-right conspiracy theories surrounding the U.S. border and the issue of immigration. Sharpe-Ulvog’s primary function within Guardian Patriots has been that of an online mouthpiece. She describes her role as one that utilizes her YouTube channel, Atomic News, to push out UCP’s message of a “crisis” at the U.S.-Mexico border.

In a video titled “Livestream Border Update – AOC Is Going To The Texas Border,” Sharpe-Ulvog argued that undocumented immigrants should not be allowed to obtain work permits and by extension driver’s licenses: “You know, there’s that big conspiracy theory, and there’s always some truth to every conspiracy theory. … Why would they need an i.d.? To register to vote! That’s the real answer you guys, that’s the real answer!”

In Sharpe-Ulvog’s case, the rhetoric her fellow Guardian Patriot members spewed even prompted her to go on online rants about how unwelcoming she wanted be toward migrants awaiting their court dates in the U.S. When talking about “catch and release,” a practice where low-risk undocumented individuals are released from immigration detention facilities as they await their trials, Sharpe-Ulvog told her followers on YouTube: “It’s happening all over the country, ok. It’s a secret because they don’t want the migrants to be intimidated by us Americans. [Sharpe-Ulvog proceeded to throw up the middle finger.] That’s what I have to say about that, ok. F--- that! Ok. They don’t want people to protest, they don’t want the migrants to feel unsafe. B----, you’re in MY country! You’re in MY state!”

Sharpe-Ulvog isn’t the only UCP member Benvie has contacted in recent months. Benvie violated his bond terms a second time in November, when he initiated contact with Pedro Antonio Aguero (aka Conservative Anthony) on Facebook. Aguero is a self-proclaimed citizen journalist who runs Border Network News (BNN), an online platform that claims to focus on border-related stories.

Aguero first became acquainted with UCP during the group’s early border patrols in Sunland Park, New Mexico. Evidence of Aguero’s stint with the group can be seen in a YouTube video titled “Conservative Anthony – Guatemala Migrants – Watch Him Chase Them Through The Desert Yesterday.” The video uploaded April 18 shows Aguero and members of UCP chasing migrants in the dead of night. Once border patrol arrived on the scene, Aguero used the opportunity to film the apprehended individuals while telling his audience, “All of you watching, ya’ll just became baby daddy to all these motherf------ right here.”

Aguero, a naturalized citizen, bills himself as being vehemently opposed to illegal immigration, yet frequently makes disparaging remarks about migrants who are legally allowed to request asylum at ports of entry. His decision to vilify all migrants goes beyond just insinuating that they all live off government assistance. In at least two separate instances Aguero has compared migrants down at the border to pests, saying, “They come out like roaches, out of everywhere.”

Aguero gave an interview to Spanish news network Univision in April, identifying himself as a spokesman for the group.

Benvie initiated contact with Aguero on Facebook after Benvie shared a public post asking his followers to donate to the We Build The Wall foundation. In a screenshot captured by Hatewatch, it appears Aguero commented on the post saying, “Let’s have an interview,” to which Benvie replied: “Anthony Aguero look in your messenger my info is there! Let’s do it!” On Dec. 6, Aguero’s associate at BNN, Oscar Ramirez (aka Oscar El Blue), uploaded an hourlong interview with Benvie on his YouTube channel.

Aguero, a registered Republican, is currently running against U.S. Rep. Veronica Escobar in Texas’s 16th District. Since announcing his campaign, Benvie has openly encouraged his Facebook followers to support Aguero.

Views espoused by groups such as UCP and Guardian Patriots fall in line with much of what the Trump Administration has been parroting over the last few years in regard to immigrants. These vigilante organizations were formed around the premise that an “invasion” was taking place and citizens were needed down at the border to curb the number of migrants coming into the country.

In a video uploaded online last March, UCP members can be seen staking out migrants while one member turns to the camera and says, “Trump if you’re watching, this is what we’re doing for you.”

When asked if he thought Trump’s rhetoric might have emboldened UCP to engage in vigilante activity, Simonson said, “I think it speaks to the point that this administration has created a cultural environment in our country that empowers, that fuels the ambitions of some pretty misguided individuals to exercise their racist beliefs in these kinds of ways and do it in such extreme form.”

Benvie’s trial is scheduled for March 2. In recent weeks, he has taken to his Facebook page to spread conspiracies about the upcoming trial, frequently making reference to what he calls the “open border mafia,” a supposed underground network of prominent liberals including New Mexico ACLU director Peter Simonson, New Mexico Gov. Michelle Lujan Grisham, Congresswoman Deb Haaland. D-N.M., and a few others he accuses of working together to misrepresent him and his group’s activities at the border.

What possible kind of possible personal benefit do I or the people in my organization derive from insisting that immigrants are treated with dignity and basic humanity? You know, we don’t gain anything from personally advocating that stance, it's strictly motivated by our commitment to seeing everybody treated with the same degree of justice and fairness that we would accord anyone else in our country.

On Feb. 10, attorney John C. Anderson submitted a motion in U.S. District Court of New Mexico on behalf of the United States, arguing to “preclude the defendant, James Benvie, from testifying,” citing Benvie’s grossly inaccurate theories about the Department of Justice’s Policies in regard to charges for impersonating a federal agent.