A congressional delegation led by U.S. Rep. John Lewis laid a wreath at the Civil Rights Memorial in Montgomery to honor the men and women who sacrificed their lives during the civil rights movement. About 300 people took part in the solemn ceremony on March 5.

Just two days before the 46th anniversary of the “Bloody Sunday” march that galvanized support for the 1965 Voting Rights Act, a congressional delegation led by U.S. Rep. John Lewis laid a wreath at the Civil Rights Memorial in Montgomery to honor the men and women who sacrificed their lives during the civil rights movement.

About 300 people took part in the solemn ceremony on March 5.

“It is so fitting and appropriate that we come to this sacred spot each year,” Lewis told the crowd. “We must never forget the sacrifices of those whose names we touch. And we have to pause and reflect and thank God for those who bore that burden.” 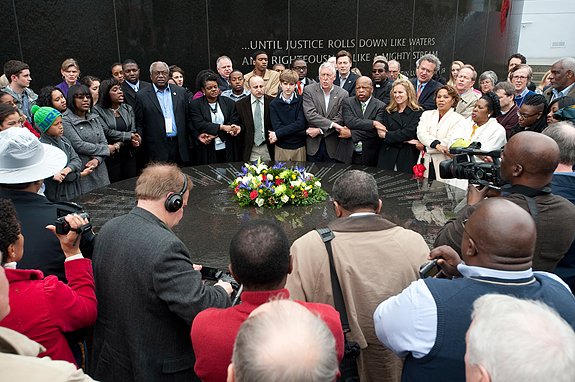 Forty names of martyrs of the civil rights movement are inscribed on the Civil Rights Memorial. They were murdered because they were active in the movement; killed as acts of terror aimed at intimidating blacks and civil rights activists; or, their deaths, like that of Emmett Till, helped spur the movement forward by demonstrating the brutality faced by African Americans in the South.

Welcoming the delegation were SPLC President Richard Cohen and Morris Dees, SPLC founder and chief trial counsel. “The Civil Rights Memorial is a sacred trust we have,” Cohen said.

The water that gently flows over the martyrs’ names reflects the faces of Memorial visitors, Cohen said, prompting them to consider what they are doing in their own time to further justice. And a blank spot in the inscriptions is a reminder that the movement has no beginning and no end. “It lives through all of us,” he said. 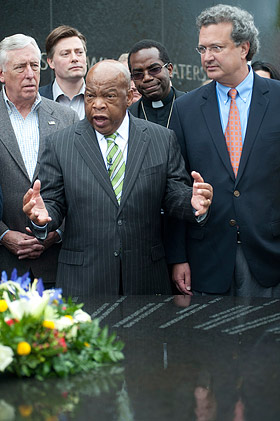 Accompanying the group this year was Kerry Kennedy, a human rights activist and daughter of the late Sen. Robert Kennedy.  A quote from her father’s famous speech against apartheid, made in 1966 at Cape Town, is featured inside the Civil Rights Memorial Center, and she cited its message as a challenge for today:

Each time a man stands up for an ideal, or acts to improve the lot of others, or strikes out against injustice, he sends forth a tiny ripple of hope, and crossing each other from a million different centers of energy and daring, those ripples build a current which can sweep down the mightiest walls of oppression and resistance.

Also speaking at the ceremony was Ebrahim Rasool, South Africa’s ambassador to the United States.

“Our work is not done,” he said. “The challenges have changed shape and form, but we need to confront these children of fear and intolerance. They come today in many names: anti-Semitism, Islamaphobia and homophobia. We cannot allow space for one, and we cannot be complacent. We have more hills to climb, and we’ve got to climb together.”

All joined hands and sang “We Shall Overcome” at the program’s conclusion.

The Memorial was commissioned by the Southern Poverty Law Center and designed by Maya Lin, who also designed the Vietnam Veterans Memorial. It was dedicated in 1989.