The SPLC today threatened to file a federal civil rights lawsuit against Brookwood High School in Alabama if the school does not stop censoring student speech in support of LGBT rights and does not rescind a policy barring same-sex couples from attending the prom together.

The SPLC sent a letter on behalf of Elizabeth Garrett, a 10th-grade student who was recently forced to remove a sweatshirt that expressed acceptance of the LGBT community and who was told she could not attend the prom with a female date. 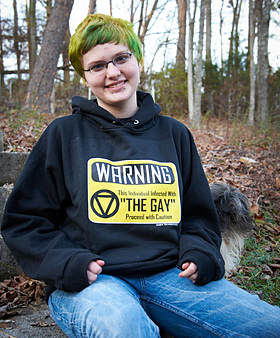 On Jan. 5, Elizabeth wore a sweatshirt with the words “Warning, This Individual Infected With ‘The Gay,’ Proceed With Caution.” She wore it to express her support for LGBT rights and to communicate, in a humorous way, that there is nothing wrong with gay people.

“A gay person is just as normal as anyone else,” said Elizabeth, who is often on the honor roll, attends mostly advanced placement courses, and is a member of the school French club.

Although it was a cold morning and she had no other outer layer, a school official demanded that Elizabeth remove her sweatshirt, claiming that it was “distracting.” The administrator released Elizabeth to her class only after she placed it in her backpack.

On another occasion during this school year, the same administrator informed Elizabeth that same-sex couples are not permitted to attend the school prom together. Elizabeth has plans to attend the prom, in May, with another female student.

Elizabeth says she is taking this action not only for herself “but for others like me who feel trampled over by the school and don’t always have an opportunity to stand up for themselves.”

Wolfe praised Elizabeth’s courage. “Brave students like Elizabeth who are willing to stand up for who they are – even when faced with school authorities who tell her she can’t – help raise awareness and improve school climate for the entire school community,” he said.

Statements supportive of LGBT people, as well as attending the prom with a same-sex date, are protected under the First and 14th amendments to the U.S. Constitution. The SPLC letter cites federal precedents, such as Gillman v. School Board for Holmes County, in which a federal court ruled that a school board’s ban on clothing expressing support for LGBT people was unconstitutional. In that case, the school had to pay $325,000 to cover the students’ legal fees.

The letter also cites McMillen v. Itawamba County School District, a case in which a female high school student asked to bring a same-sex date to the prom and wear a tuxedo. The school district canceled its prom after being informed that its action was unlawful. A federal court later ruled that a lesbian student bringing a same-sex date to the prom and wearing a tuxedo are “the type of speech that falls squarely within the purview of the First Amendment.”

In a similar case, Fricke v. Lynch, a school district had to pay more than $116,000 in damages and attorneys’ fees for denying a student’s right to bring a same-sex date to a school dance.

The SPLC letter further explains that if there are students who will act disruptively in reaction to Elizabeth’s sweatshirt or her attending the prom with a girl, the school has a duty to counter the disruptive students, not prohibit Elizabeth’s speech.

The SPLC was alerted to Elizabeth’s situation by the Alabama Safe Schools Coalition (ASSC). The SPLC is a part of the coalition, which provides training and seeks to improve state and district school policies relating to LGBT students in Alabama.