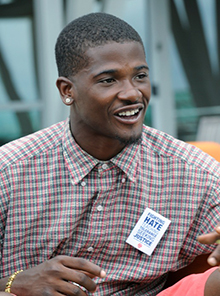 Sammy, a client in the SPLC lawsuit.

Sammy remembers when he was suspended from high school for more than 50 days. He didn’t get into a fight or threaten another student. His shirt was untucked.

Earlier in the day, his principal noticed his shirt wasn’t completely tucked in the back. “He wrote my name down and he told me that if he saw me again he was going to suspend me,” Sammy said.

Later, the student was tucking in his shirt as he left the gym. The principal spotted him.

“He saw me across the courtyard, and he just said he got me,” Sammy said.

Sadly, this experience at Blount High School in Eight Mile, Ala., wasn’t unusual for students in the Mobile County Public Schools system. Suspensions were often meted out for minor misbehavior, such as uniform violations or excessive talking.

But, today, an agreement resolving an SPLC lawsuit against the school district is ensuring that students won’t be pushed out of school for such minor offenses. District officials have reported a more than 30 percent drop in suspensions from roughly a year ago.

“Mobile County school officials have demonstrated a commitment to promoting alternatives to suspensions that keep schools safe,” said Maria Morris, the SPLC attorney managing the case. “It’s obvious that the schools and students are already benefiting from policies that keep young people in class where they can learn.”

It’s a contrast from a year ago when one high school principal suspended more than 90 students for uniform violations. When the new school year kicked off last fall, high school and middle school principals had new discipline guidelines that are a result of the settlement reached in June. The settlement also established a formal training program on short- and long-term suspensions for school administrators and staff.

The 2011 lawsuit is part of the SPLC’s work across the Deep South to reform harsh zero-tolerance policies that unnecessarily push students out of class and, quite often, into juvenile detention for minor offenses. Research shows that children who are suspended are more likely to drop out and end up the juvenile justice system. Last week, the Department of Education released data showing that African-American children are three times more likely to be suspended and expelled than their white peers.

“The changes have been very positive,” Terrence Mixon, the district’s executive director of student services, told AL.com. “We really took a long, hard look at our student data with regards to suspensions. Even though this whole effort came about as a result of the lawsuit, it has had a positive effect on what we do with discipline.”

School officials will meet with the SPLC every quarter to report policy changes and other matters. The district has agreed to form a working group to develop research-based alternatives to school suspension. The group includes parents, students, teachers and other school officials. The district also agreed to revise the student code of conduct to create an easy-to-understand format for parents and students.

“I am glad my story was able to help. And that it was able to go somewhere,” said Sammy, a client in the SPLC lawsuit. “It is great that kids are staying in school and things are getting better.”

The SPLC’s federal lawsuit was filed on behalf of seven students suspended for more than 10 days for minor infractions, such as untucked shirts and being late to class. Some students received suspensions of 40 days or more.

The suit also alleged that the school system violated the due process clause of the 14th Amendment, which entitles students to notice and a fair hearing to defend themselves before a long-term suspension or expulsion is imposed. Long-term suspensions in Mobile County Public Schools range from 11 days until the end of the semester.

Other key provisions of the agreement include:

The law firm WilmerHale served as co-counsel on the case.