An SPLC attorney recounts how she helped a student in Louisiana return to school following an expulsion. That student is now a high school graduate bound for college.

This past May, I received a phone call that left me fighting back tears of joy.

On the other end of the phone was Carlos Kelly, a high school student I had helped a few years ago by getting his expulsion overturned. He was a good kid who just needed a second chance at school. Once the SPLC helped him get that opportunity, he made the most of it: Carlos was calling to invite me to his high school graduation.

As I watched him accept his diploma, I felt so proud for this young man who had turned his life around. I was also grateful that we were able to help make this transformation possible.

When I first met Carlos in April 2012, he was an incredibly frustrated ninth-grader in Louisiana’s Jefferson Parish Public School System. He had been repeatedly suspended for being disrespectful. He was eventually expelled. As I began helping him appeal the expulsion, it became clear to me that no adult had ever tried to understand why he was so frustrated and so angry. Instead, assumptions were made. 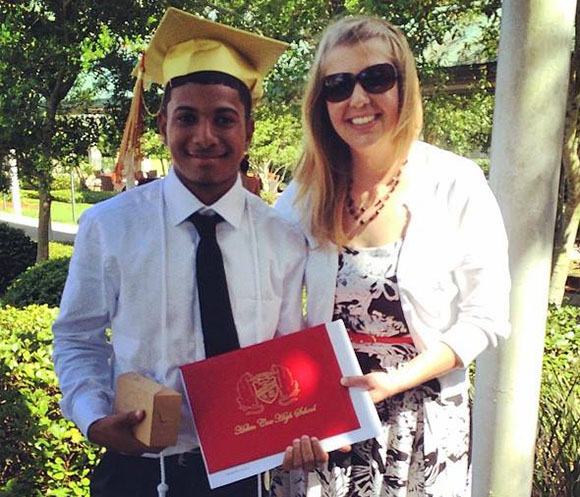 “Everywhere I went, they’d judge me by my background, as a kid from the Dominican Republic who had a bad older brother. I could never get a fresh start,” he said. “Teachers told me I’d be just like my older brother, who dropped out. It got so everyone thought I was so bad, so I decided I might as well be that bad.”

Carlos said he received so many suspensions that they began to run together. He didn’t see them as punishment. As Carlos put it, they were a vacation – a break from the people at school who didn’t understand him.

It was easy to see why he felt this way. After months of working with Carlos, he told me about a teacher calling him a “wetback.” When it happened, he initially didn’t know the word, and didn’t understand why all the other students started laughing and making fun of him. He asked his dad what it meant, which was a humiliating experience for both of them.

Sadly, Carlos wasn’t the first student to encounter racial hostility in this school district. In fact, his experience was included with those of more than a dozen other Latino families in a 2012 complaint the SPLC filed with the Justice Department and the U.S. Department of Education. That complaint has sparked a federal investigation into the Jefferson Parish Public School System.

The SPLC was able to get Carlos’ expulsion overturned, but there was one condition: He had to attend a different high school in the district. I told him that this was his chance to prove wrong all the people who had prejudged him. This was his second chance. He needed to make it count.

“I gave it 110 percent,” Carlos said. “I realized she had put a lot of effort to put me back into school, so I didn’t want to disappoint her or my dad. I told myself I had to focus. When someone at school made me mad, I’d say ‘Carlos, they’re pushing your buttons. Don’t let them.’ At my old school I would have exploded.”

As Carlos put his best foot forward, the school did the same. Although he needed to complete some freshman credits, the new school let him wear the sophomore uniform. It helped Carlos avoid what he saw as a humiliating experience: Starting classes at a new school in a freshman uniform. It was a small but important step by the school to earn his trust.

He also met people at his new school willing to help him make the most of this opportunity.

“I met a counselor who took the time to talk to me,” he said. “She told me when she was in high school she had a mouth that got her into trouble, and she went through what I was going through. She really helped me. I felt like I had someone looking out for me for the first time.”

Carlos’ hard work at school paid off. He not only earned his high school diploma, but several universities have offered athletic scholarships. He plans on attending one of those universities in the fall.

“You need to give people second chances,” Carlos said as he reflected on his experience. “I felt like I was in a box and I couldn’t get out of it. School and teachers should be there to help you, and all kids should get second chances.”

Jennifer Coco is a staff attorney with the SPLC’s Louisiana office.