A quarter century ago, 6,000 people gathered in Montgomery, Alabama, to witness the dedication of the nation’s first memorial to the martyrs of the civil rights movement. Today, the Civil Rights Memorial remains a solemn tribute to sacrificed lives and a reminder that the march for racial and social justice continues.

Under a beaming sun on Nov. 5, 1989, they listened as Rosa Parks helped dedicate the Civil Rights Memorial. In her address, Parks, whose act of defiance on a Montgomery bus rallied a movement to fight Jim Crow, reminded the audience that the struggle for justice wasn’t over.

“It never ends,” Parks said. “But we are living in hope that the future, as we gather for peace, justice, good will and the priceless life of all, that we will not have to mourn the dead but rejoice in the fact that we, as a nation of peace-loving people, will overcome any obstacle against us.”

Twenty-five years later, the black granite monument inscribed with the names of 40 martyrs of the movement remains both a solemn tribute to sacrificed lives and a reminder that the march for racial and social justice continues.

Hundreds of thousands of people have since visited the memorial – to pause and reflect on the names of those who made the ultimate sacrifice for justice and equality. It also has become a tool for education and an “instrument for justice” that has helped spark investigations – and ultimately convictions – in civil rights-era Klan murders. 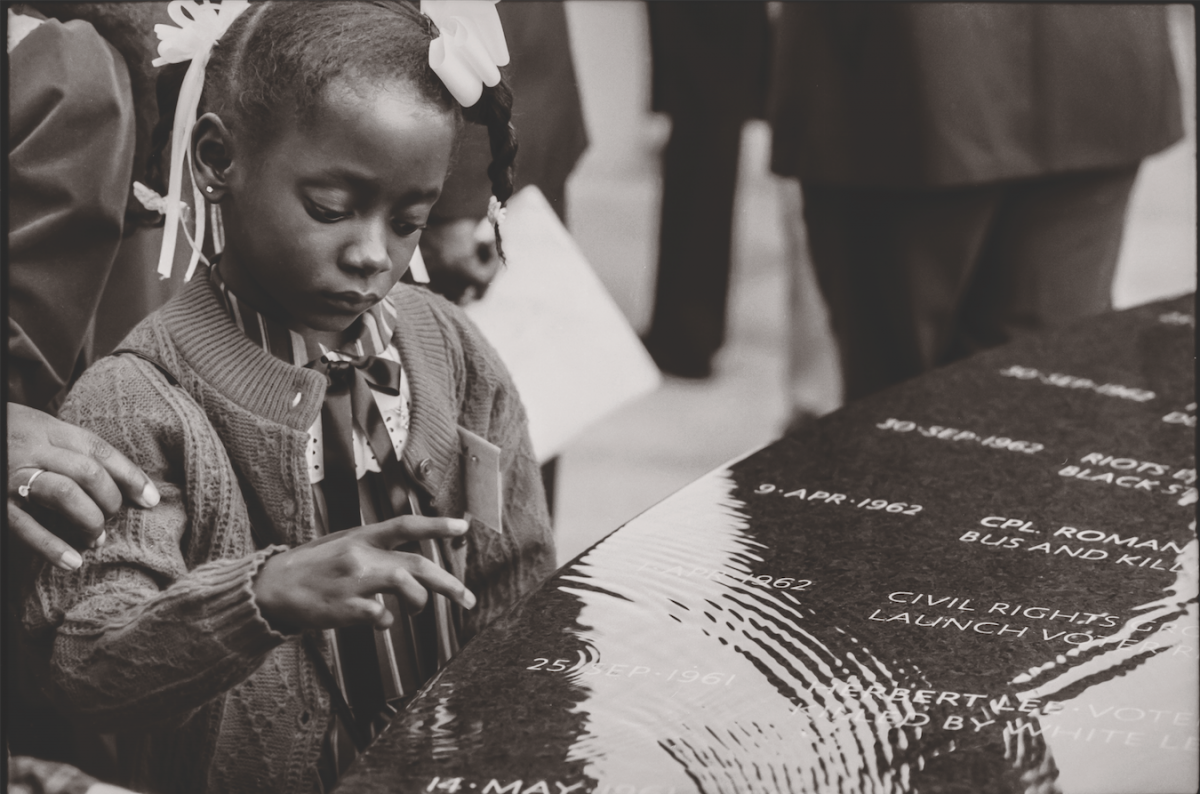 Kimberly Robinson touches her grandfather’s name, Herbert Lee, on the Memorial during the dedication.

The Memorial was the brainchild of SPLC founder Morris Dees. In 1987, he was speaking at the annual convention of the Alabama NAACP, where he was being honored for the SPLC’s court victory over the United Klans of America for the lynching of a black teenager in Mobile, Alabama.

During the speech, he recited the names of civil rights activists and others murdered by white supremacists during the movement. Afterward, he was asked by young people about those he had named – people like Emmett Till and Viola Liuzzo.

On the drive back to Montgomery that night, Dees was troubled that the young people knew so little about such an important – and recent – part of the nation’s history. He decided that the SPLC should build a monument to the martyrs of the movement so that their sacrifices would never be forgotten.

The SPLC commissioned Maya Lin, creator of the Vietnam Veterans Memorial, to design the monument. The SPLC also researched violent deaths during the civil rights movement – from May 17, 1954, the day the U.S. Supreme Court outlawed school segregation, until April 4, 1968, when Dr. Martin Luther King Jr. was assassinated.

The 40 martyrs selected fit at least one of three criteria: They were murdered because they were active in the movement; they were killed as acts of terror aimed at intimidating the black community and civil rights activists; or, their deaths, like that of Emmett Till, helped to galvanize the movement by demonstrating the brutality faced by African Americans in the South. 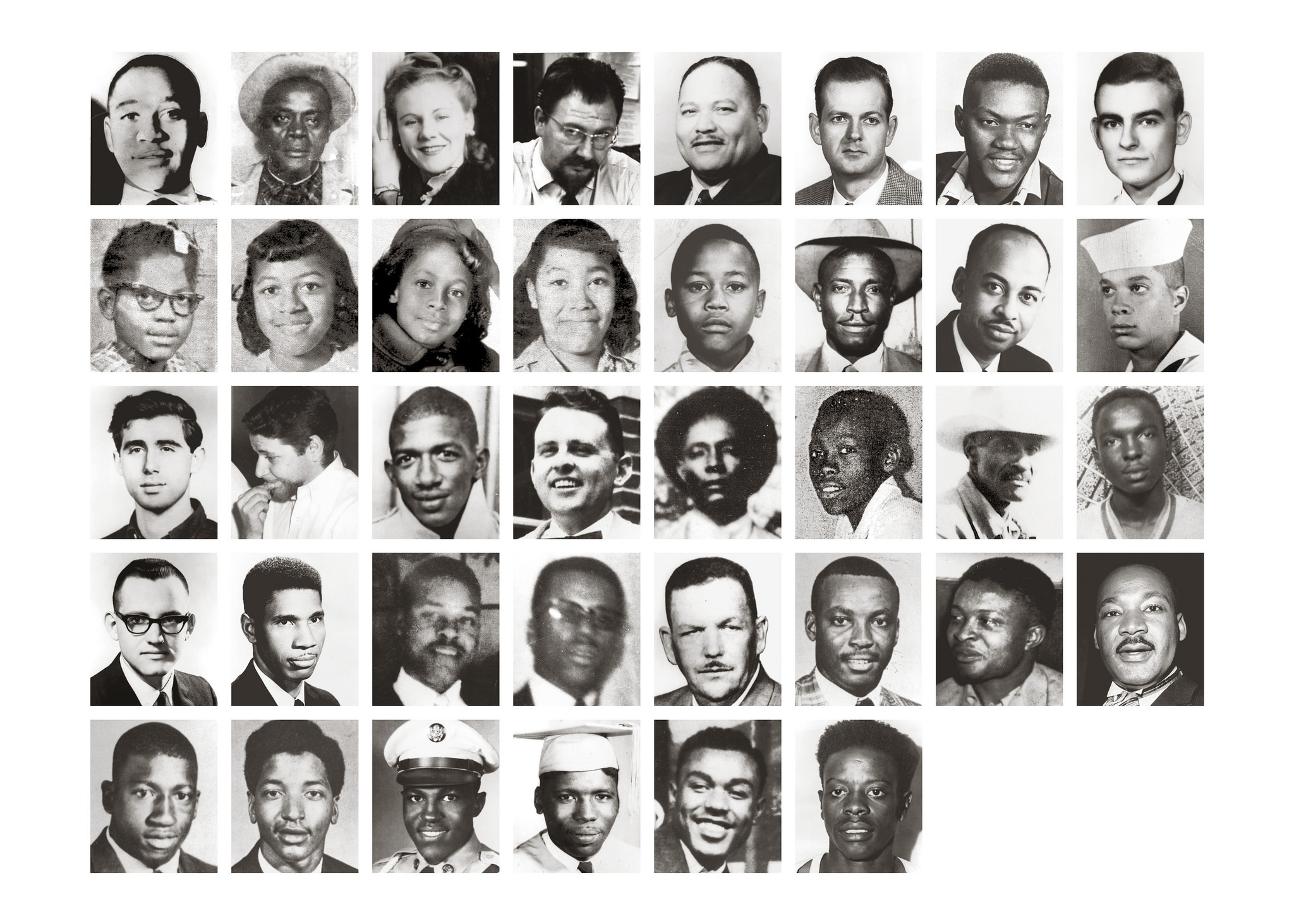 The names were inscribed on a black granite table, reminiscent of a sundial, that chronicles important events of the movement.

"You really begin to see a cause and effect and how people actually helped to change history,” Lin said in A Strong Clear Vision, a 1994 documentary about the artist.

Lin left a blank space between the first and last entries of the Memorial’s circular timeline to signify that the struggle for human rights began well before 1954 and continues to this day. Water emerges from the table’s center and flows over the top. Behind it, water cascades over a curved black granite wall inscribed with words from the Bible’s Book of Amos that King quoted on several occasions: “…until justice rolls down like waters and righteousness like a mighty stream.” Lin said when she came across the quote in King’s “I Have a Dream” speech, she knew water would become part of the Memorial.

When the Memorial was dedicated, family members of the martyrs and others were moved by its power. Mamie Till Mobley, whose son Emmett Till was included as a martyr, was overcome with emotion.

“I ran my fingers over the letters of Emmett’s name and felt the cool water,” she later wrote in Death of Innocence: The Story of the Hate Crime That Changed America. “I began to weep. … It was like touching my son. Like reliving his funeral. But, as I told people there, it also filled me with such joy to see Emmett being honored, to see him included among the martyrs of the movement.”

An ‘Instrument of Justice

Mitchell’s investigations prompted prosecutions that put four Klansmen behind bars for some of the most heinous – and lethal – acts of the civil rights era, including the 16th Street Baptist Church bombing that killed four little girls in Birmingham.

As for the victims listed on the Memorial, eight white supremacists were convicted for 13 of the 40 murders in the years following the 1989 dedication. Four others were convicted in another Mississippi killing.

Each year, the Civil Rights Memorial attracts an estimated 50,000 visitors. Schoolchildren, civil rights activists, lawmakers and others have visited the Memorial and learned about the movement and modern human rights struggles.

“This is a special and sacred space,” U.S. Rep. John Lewis, D-Ga., a veteran of the civil rights movement who was beaten during the Selma-to-Montgomery march in 1965, said during a visit to the Memorial with a Congressional delegation. “They gave their blood, and ... we gather here to remember them.”

In 2005, the SPLC opened the Civil Rights Memorial Center, a visitor center that further transformed the site into a powerful teaching tool. Interactive exhibits and a 20-minute film, Faces in the Water, teach visitors about the movement. On their way out, visitors can publicly pledge to work for justice, equality and human rights in their own lives by adding their names to the Wall of Tolerance, a digital cascade of multicolored names falling, like the water on the Memorial outside, down the face of a massive, curved black wall. 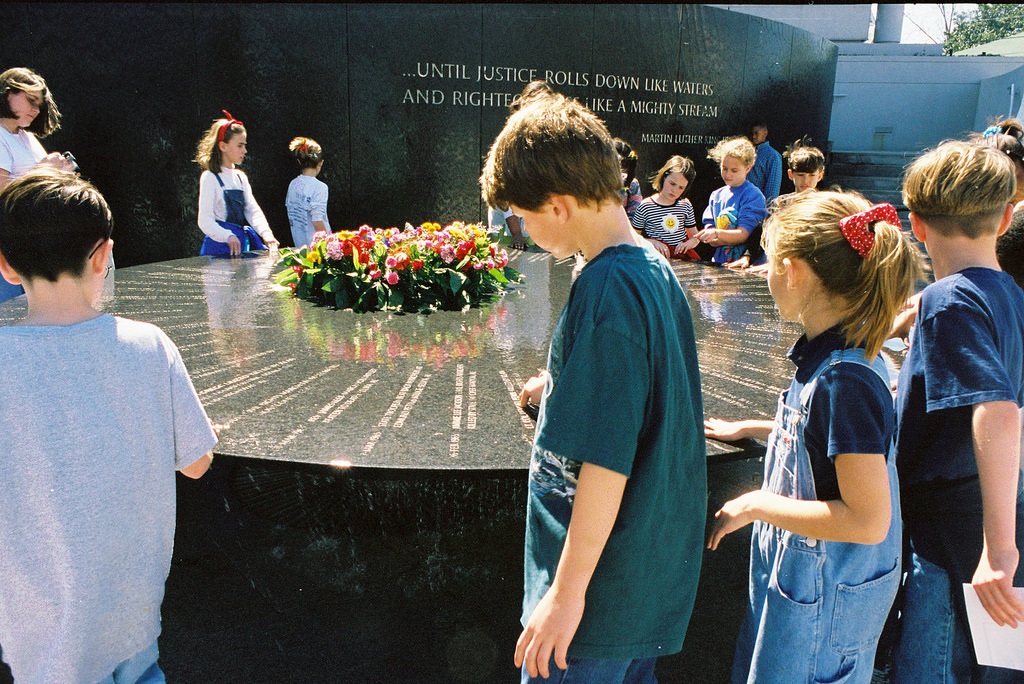 Commemorating the lives of the civil rights martyrs and inspiring others is what Dees and the SPLC had envisioned when they created the memorial in a city known as the “Cradle of the Confederacy.”

The last 25 years have seen that vision become a reality. In a plaza just a block from the church where King led the Montgomery bus boycott and in the shadow of the Alabama Capitol where Alabama Gov. George Wallace declared “segregation forever,” sits a somber monument to lives sacrificed for the nation’s highest ideals.

“Once, this cradle rocked with the violence of our opponents; today it is soothed by the waters of this monument,” civil rights activist and former SPLC President Julian Bond said at the dedication. “A monument which, like the movement it honors, is majestic in its simplicity, overwhelming in its power. It bears the names of 40 men, women and children who gave their lives for freedom. It recalls their individual sacrifice. And it summons us to continue their collective cause.”