One of the highest awards the Mexican government bestows outside the nation was recently presented to Dan Werner, director of the SPLC’s Southeast Immigrant Freedom Initiative (SIFI), for tireless work protecting immigrants from discrimination, exploitation and abuse.

Werner received the Ohtli Award on behalf of SIFI from the Mexican government’s Institute for Mexicans Abroad in Atlanta on Sept. 15 as part of a ceremony recognizing the 207th anniversary of Mexico’s independence.

The annual award, which consists of a medal, a plaque and diploma, recognizes individuals who have distinguished themselves by advancing the prosperity of Mexican-American and Latino communities and opening pathways that improve their quality of life. 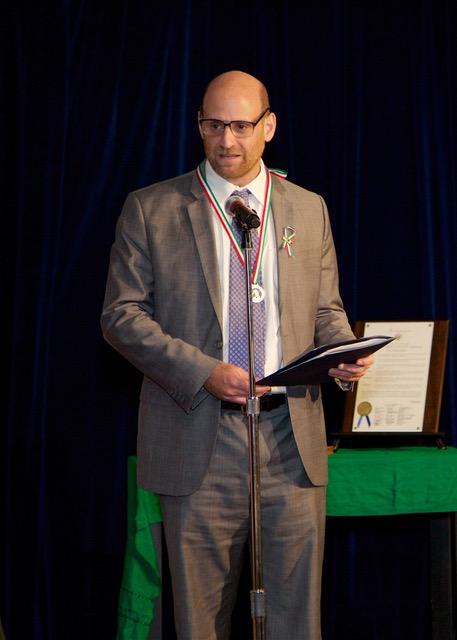 SPLC's Dan Werner receives one of the highest awards given by the Mexican government.

“I am honored to accept this award recognizing SIFI’s efforts to ensure justice, dignity and fairness for immigrant communities in the United States,” Werner said, adding that he was accepting the award on behalf of the lawyers, paralegals, investigators, support staff and others at the SPLC. “The current anti-immigrant climate in our country has only strengthened our resolve to ensure these communities have a voice to speak out against injustice, and strong legal representation to protect them from mistreatment.”

SIFI, a project launched in the wake of President Trump’s immigration dragnet, enlists and trains lawyers to provide free legal representation to detained immigrants facing deportation proceedings in the Southeast.

Immigrants with counsel are 10 times as likely to succeed in their cases as those who represent themselves. But many lack representation because they can’t afford it and because detention centers are geographically isolated. When fully implemented, SIFI will be the largest detention center-based deportation defense project in the country.

For more than a decade, the SPLC has worked to stop workplace exploitation and other human rights abuses of immigrants by filing strategic lawsuits, exposing civil rights violations, educating the public and the media, and pressing the federal government to act.

Its 2013 report, Close to Slavery, drew national attention to the abuses of the H-2 guest worker program, which the SPLC has sought to reform in the courts and halls of government. The SPLC has also sought reform within the poultry industry, which often subjects its largely immigrant workforce to punishing – and dangerous – conditions.

When vicious anti-immigrant laws were passed across the Southeast, the SPLC successfully fought them in multiple states. One SPLC lawsuit, for example, gutted Alabama’s law, widely considered the harshest in the nation. And in the wake of Hurricane Katrina, the SPLC fought for immigrant workers cheated out of wages as they cleaned and rebuilt New Orleans.

The Ohtli Award takes its name from the Nahuatl word for “path.” The Nahuatl people are a group that is native to southern Mexico and Central America, and includes the Aztecs. In Aztec culture, the straight path leads to one’s destiny.

“Ohtli means that somebody is opening a road for others coming behind them, and we recognize the work of the Southern Poverty Law Center,” said Javier Díaz de León, the consul general of Mexico in Atlanta. “[The SPLC has] done wonderful work in defending the rights of immigrants in this part of the country. …They work very closely with the Mexican government in order to approach and examine ways of providing immigrants legal assistance and identifying those that might be victims of hate crime. We couldn’t be more proud of the partnership and the friendship that the SPLC gives to the Mexican government.”