U.S. Rep. John Lewis led a gathering of congressional and civil rights leaders in a wreath-laying ceremony at the Civil Rights Memorial in Montgomery, Alabama, today, honoring those who lost their lives in the struggle for civil rights.

The Memorial, which has been a frequent stop on civil rights pilgrimages led by Lewis, took on special significance this year. April 4 marks the 50th anniversary of the assassination of the Rev. Martin Luther King Jr., whose name is the last one that appears on the Memorial.

The Memorial, which the SPLC dedicated in 1989, honors 40 martyrs who died during the height of the civil rights movement, between the U.S. Supreme Court’s Brown v. Board school desegregation decision in 1954 and the assassination of King in 1968. 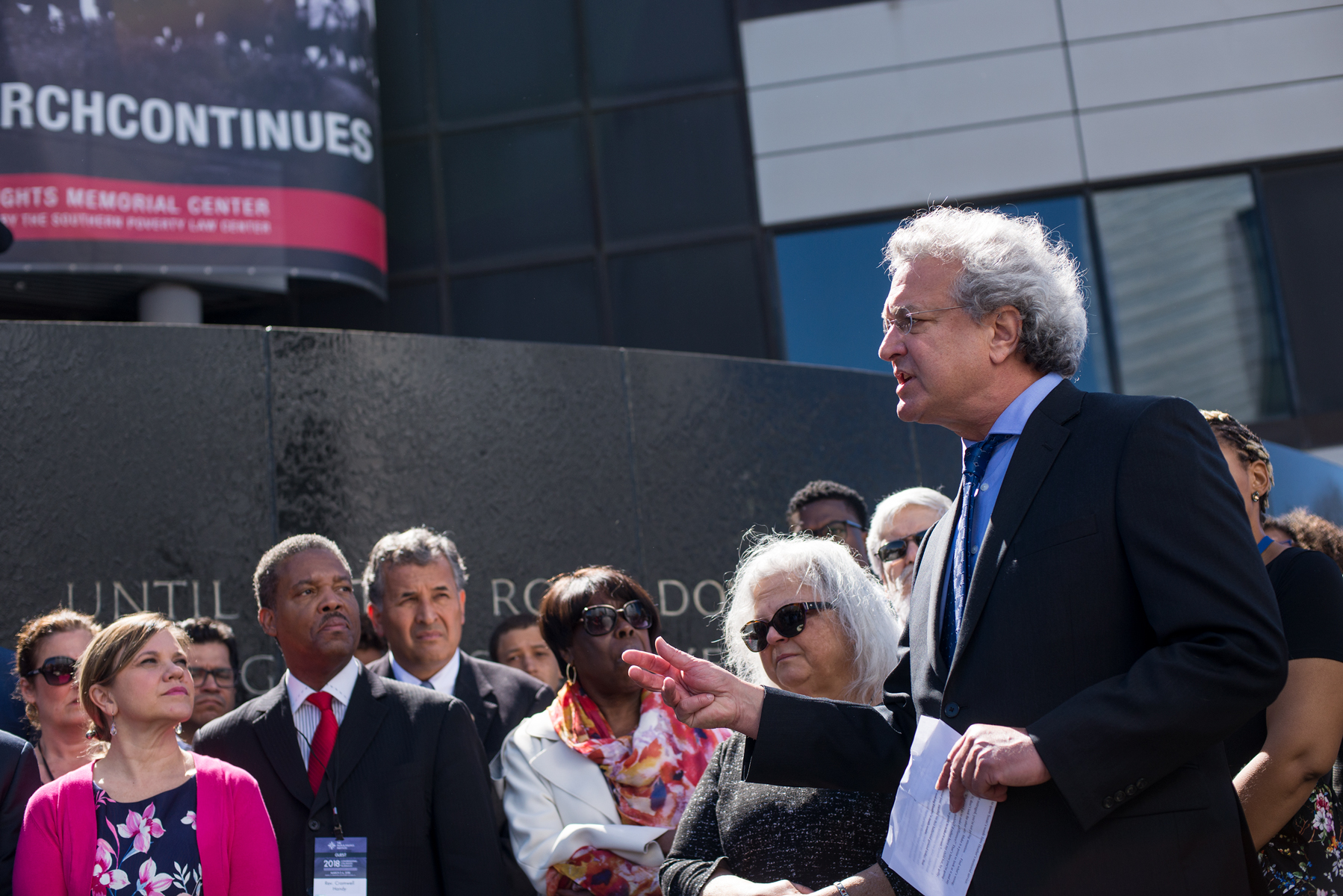 “Congressman Lewis, I want to welcome you, your colleagues, and everyone on the pilgrimage to the hallowed ground of the Civil Rights Memorial,” SPLC President Richard Cohen said. “It honors those whose sacrifices, whose deaths, propelled the movement forward. Men and women, young and old, white and black – all of them are remembered here.

“But, in many ways, the most important spot on the Memorial is not an entry of an historic event or the name of a martyr,” Cohen said. “Instead, it’s the blank space between the first entry on the Memorial and the last. The space signifies that the movement didn’t begin in ‘54 with the Brown decision, and it didn’t end with Dr. King’s assassination.”

Joining Lewis at the Memorial were House Democratic Whip Steny Hoyer, U.S. Sen. Lamar Alexander, several members of the Alabama congressional delegation and other dignitaries, including U.S. Rep. Barbara Lee, whose grandsons Joshua and Jonah Lee laid the wreath for the ceremony.

This year is also the 53rd anniversary of Bloody Sunday, the day that Lewis, who was chairman of the Student Nonviolent Coordinating Committee (SNCC), was at the front of the column of demonstrators who attempted to march from Selma to Montgomery in support of voting rights.

Lewis was badly beaten by state troopers who attacked the marchers with clubs and tear gas as they tried to cross the Edmund Pettus Bridge. The attack galvanized support for the historic 1965 Voting Rights Act.

The movement continues through the work of everyone in the country who is committed to justice and peace, Cohen said, including people who would give up their lives for a cause larger than themselves – people like Heather Heyer.

Heyer, 32, was killed Aug. 12 when a car plowed into a crowd of counterdemonstrators who were protesting a rally of neo-Nazis, Ku Klux Klan members and other white nationalists in Charlottesville, Virginia. 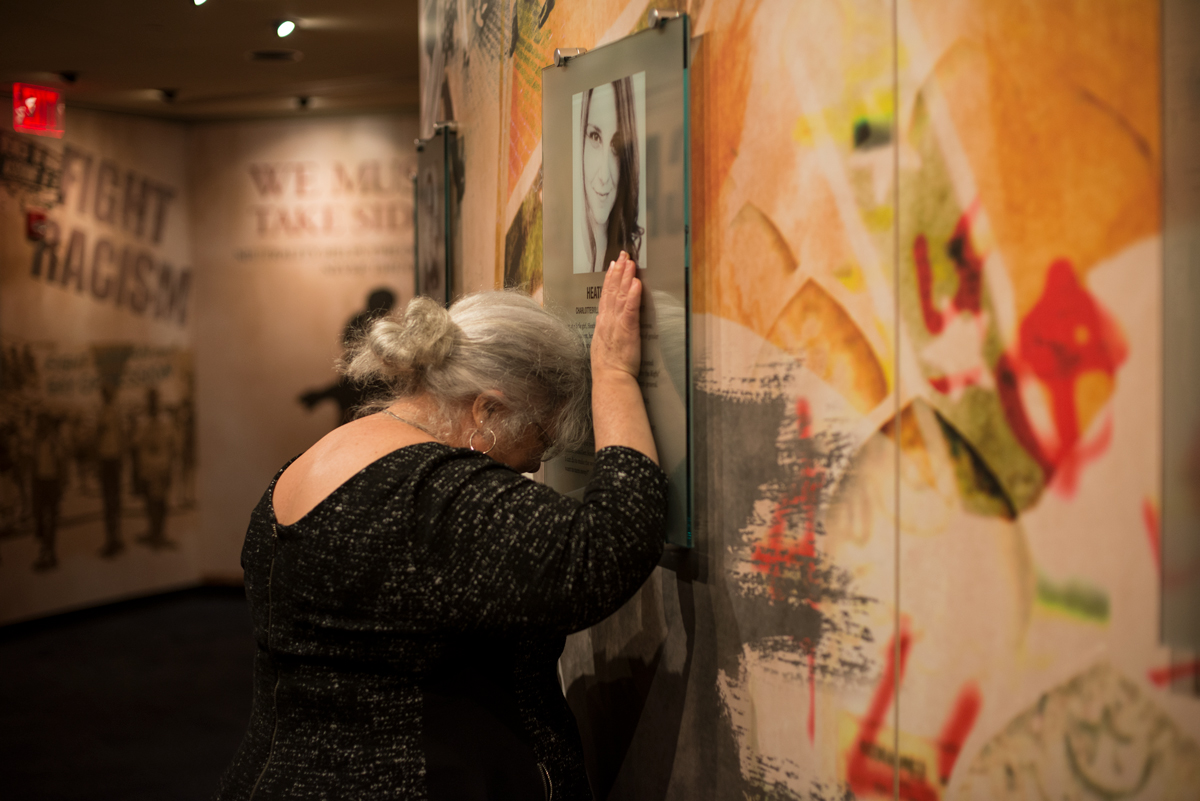 Susan Bro, mother of Heather Heyer, stands with a plaque honoring her daughter.

“Heather’s death, as well as the deaths of two Virginia State police officers who were trying to keep the peace that day, led Congress to pass a joint bipartisan unanimous resolution, condemning white supremacy and urging the president to speak out against all forms of bigotry, and to address the growing prevalence of hate groups in our country,” Cohen said, emphasizing that it was “a bipartisan unanimous joint resolution.”

Concluding his remarks, Cohen said: “Susan, Kim we promise you, standing on this hallowed ground today, that we’re all committed to making Heather’s death count.”

The ceremony was part of a regular pilgrimage sponsored by the Faith & Politics Institute, which brings participants to historic civil rights sites in Alabama. The 2018 Congressional Civil Rights Pilgrimage began on March 2 and will continue through March 4. It includes stops in Memphis, Tennessee; Birmingham and Selma as well as Montgomery.

This year, organizers added the stop in Memphis, where King delivered his “I’ve Been to the Mountaintop” speech the night before his assassination on April 4, 1968.

The Civil Rights Memorial, designed by Maya Lin and built by the Southern Poverty Law Center, stands outside the SPLC office and less than a block from the Dexter Avenue King Memorial Baptist Church, where King led the Montgomery bus boycott that galvanized the movement.

Two children of civil rights martyrs whose names are inscribed on the Memorial attended an event at the church before walking over to today’s ceremony: Martin Luther King III is King’s son; Mary Liuzzo Lilleboe is Viola Liuzzo’s daughter.

Liuzzo traveled to Alabama in March 1965 to help with the voting rights march after seeing television reports of the attack at the Edmund Pettus Bridge. She was ferrying marchers between Selma and Montgomery when she was shot and killed by Klansmen in a passing car.

The martyrs whose names are listed on the Memorial were murdered because they were active in the movement; were killed as acts of terrorism aimed at intimidating civil rights activists; or whose deaths, like that of Emmett Till, helped spur the movement forward by demonstrating the brutality faced by African Americans in the South.