The first African American elected mayor of Montgomery, Alabama – a city known as both the “Cradle of the Confederacy” and the “Birthplace of the Civil Rights Movement” – urged those who gathered today to celebrate the 30th anniversary of the Civil Rights Memorial to ask themselves how they can make an impact on the lives of others.

The Memorial, dedicated by the SPLC on Nov. 5, 1989, honors 40 people who were killed during the modern civil rights movement, a period framed by the 1954 Brown v. Board of Education decision and the assassination of Martin Luther King Jr. in 1968.

“What we commemorate is the lives and the spirit of those who are immortalized in this marble. We commemorate their spirit,” Montgomery Mayor-elect Steven Reed said from a podium overlooking the Memorial – a spot not far from where enslaved Africans were once traded, not far from the church where King preached about justice, and not far from where Rosa Parks refused to give up her seat on a bus, galvanizing the civil rights movement.

“We commemorate how they lived and what they wanted to be about. Because it’s not a matter of life and death. Death will befall all of us. The question is how will we live and how will we measure our life? What contributions and what impact on others will we have? When we think about those who we memorialize here today, let us remember their sacrifice. Let us remember why that was done. And let us remember the opportunities that we have now in front of all of us because of that.”

The ceremony, which drew more than 200 people, also featured special performances by members of the Park Crossing High School Choir under the direction of Darrian Stovall.

Participants – including students from Park Crossing and Valiant Cross Academy – laid 40 long-stemmed red roses on the Memorial in honor of the 40 martyrs whose names are inscribed there.

SPLC officials – including Joe Levin, co-founder; Karen Baynes-Dunning, interim president; and Lecia Brooks, chief workplace transformation officer – were among several dignitaries who laid roses on the Memorial. Reed, Baynes-Dunning and Levin also took a moment together to lay their hands in the water that runs across the names of the martyrs on the Memorial. 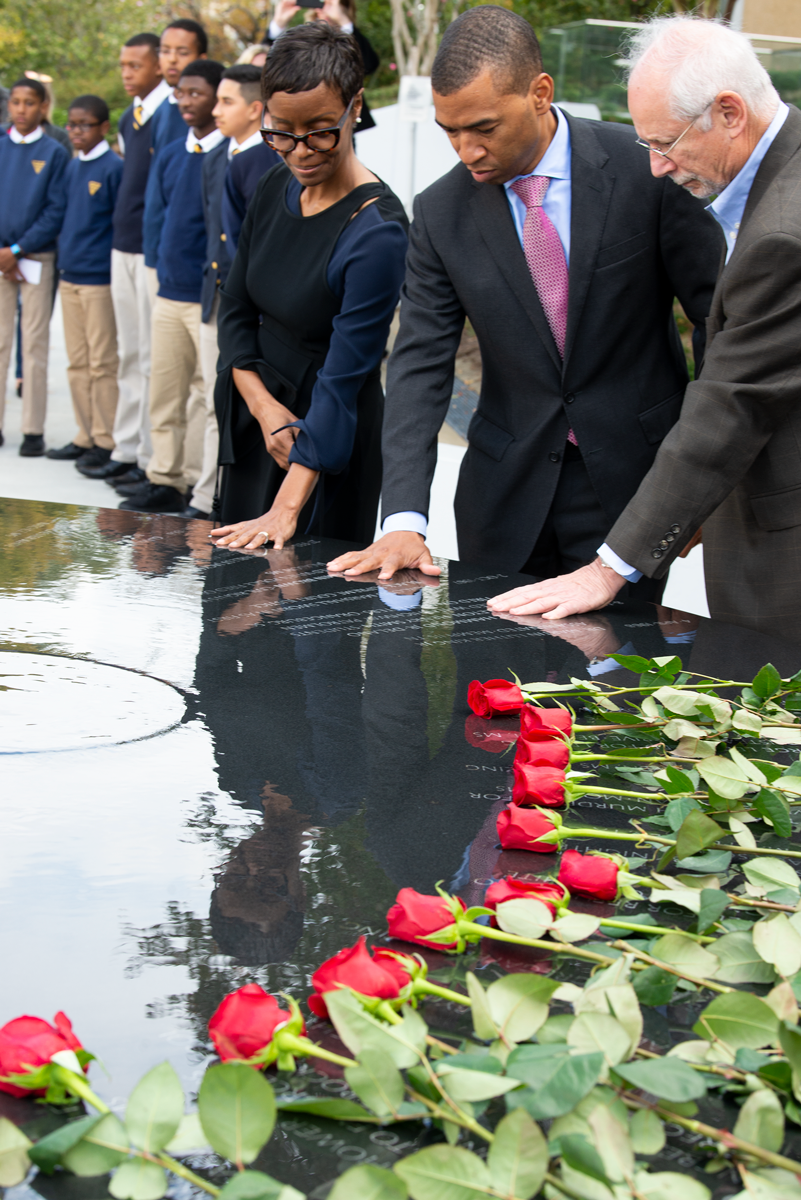 “This Memorial, with its deeply symbolic beauty, honors the women, men and children who sacrificed their lives,” Baynes-Dunning said. “Some were advocating for the right to vote. Others were working to end segregation, create equity in education, and to end the era of inhumane Jim Crow laws. Some were just being black children, going to church, visiting family in the South, or riding on the handlebars of their brother’s bicycle. Their lives and their untimely deaths galvanized our nation to really fight toward true justice for all.” 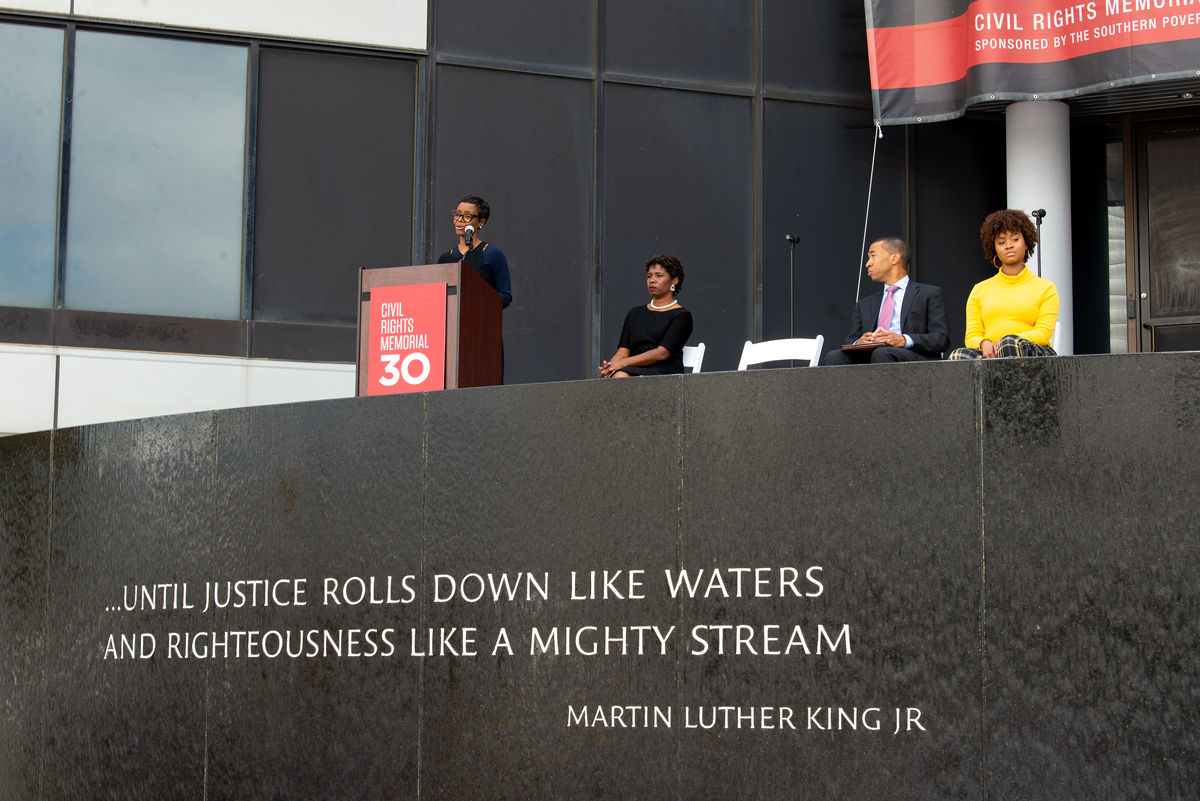 The struggle for justice and equality is not over, Baynes-Dunning said.

“Just like 30, 50 years ago, we are still fighting some of the same issues when it comes to voting,” she said. “Voter suppression, people losing access to polls. You name it, there are tactics at play that we must stand up against. And we all know that it is so important for everybody to not only have the right to vote, the access to vote, but have their vote count.”

The 30th anniversary commemoration activities began on Monday, with a panel discussion examining current voting rights issues and the civil rights movement at the Civil Rights Memorial Center, an interpretive center behind the Memorial.

Tafeni English, director of the Civil Rights Memorial Center, moderated the panel. She said that 12 of the 40 people whose names are inscribed on the Memorial died because they were standing up for voting rights.

The panel, which was broadcast on Facebook Live, included Nancy Abudu, deputy legal director for voting rights at the SPLC; Kynesha Brown of the Rollin’ to the Polls Voting Initiative, which engages voters in the election process and offers free rides to polling places in Montgomery; and Nora Cross of Hola, a Latinx community empowerment organization in the city.

“Voting rights really are the foundational rights when it comes to the exercise of all other rights,” Abudu said, citing immigration reform, criminal justice reform and education among other issues.

The SPLC is working to protect voting rights across the South through legal action, policy advocacy, public education and voter mobilization efforts, among other initiatives, Abudu said.

She cited the Supreme Court’s 2013 Shelby County v. Holder ruling, which gutted a key provision of the Voting Rights Act that required states with a history of voter discrimination to get federal approval for any changes they make to voting rules. In the years since that decision, lawmakers in numerous states have enacted laws that make it harder for citizens to vote, she said, including restrictive voter ID laws, closing or consolidating polling places, shortening early voting hours and other measures.

“We are dealing with serious areas of voter suppression that are just a direct assault when it comes to the fundamental right to vote,” she said.

Brown said the state of Alabama did not inform people with past felony convictions that in many cases their right to vote had been restored after a state law was passed in 2017. So members of Rollin’ to the Polls took it upon themselves to educate these voters about their rights under the law.

Brown encouraged people to vote for candidates who will represent their interests, not just those with good name recognition. She said voters tend to be more skeptical of newcomers than of longtime incumbents who may not represent their districts well.

“I think we need to kind of be fair to political newcomers as well as incumbents,” she said. “I don’t think we do a good job in holding our current elected officials accountable.”

Cross encouraged the Latinx community in Montgomery, which has been reluctant to involve itself in politics, to engage in the voting process. She also encouraged people who are not Latinx to look at the situation at the southern border, where people seeking asylum are being separated from their families, locked up in immigration prisons and deported.

The vote can make a difference, she said.

“Let’s look at the situation of our neighbors,” she said. “Let’s look at what we have in front of us and engage. The vote is the only power, the real power that we have as a society. There are so many things that are outside of our control, circumstances that we cannot change. But electing our representatives is something that we can do.”

Immediately after today’s ceremony at the Memorial, the SPLC announced Ariel Steele, a ninth-grader at Booker T. Washington Magnet High, as the winner of the CRM30 Art Competition, a contest that was open to all Montgomery public school students in grades 9-12.

The Memorial provides thousands of visitors each year with a vehicle for education and reflection about the struggles for equality. The martyrs selected for the Memorial fit at least one of three criteria: They were murdered because they were active in the movement; they were killed as acts of terror aimed at intimidating the black community and civil rights activists; or, their deaths, like that of Emmett Till, helped to galvanize the movement by demonstrating the brutality faced by African Americans in the South.

When the Memorial was dedicated three decades ago, 6,000 people gathered to witness the dedication of the nation’s first monument to the martyrs of the movement. Water emerges from the center of a round, black granite table and flows evenly across the top, where the names of martyrs and the history of the movement are inscribed.

Behind the table, water cascades over a curved black granite wall inscribed with a paraphrase from the Bible’s Book of Amos that King quoted on several occasions: “… until justice rolls down like waters and righteousness like a mighty stream.” The Memorial was designed by Maya Lin, creator of the Vietnam Veterans Memorial.

During the dedication ceremony 30 years ago, the SPLC’s first president, the late Julian Bond, noted to the crowd that gathered at that time that it was an opportunity to look to the future and the challenges that remain.

“Let us rededicate ourselves to freedom’s fight,” Bond said. “Let us gather, not in recrimination, but in reconciliation, remembrance and renewed resolve.”

Since the dedication ceremony in 1989, hundreds of thousands of people have visited the Memorial to pause and reflect on the names of those who made the ultimate sacrifice for justice and equality. Busloads of schoolchildren visit on a regular basis, and U.S. Rep. John Lewis – himself an icon of the movement – leads wreath-laying ceremonies with congressional and civil rights leaders.

The ensuing decades, however, saw the black granite of the Memorial table deteriorate. On Aug. 6, the 54th anniversary of the Voting Rights Act, the table was replaced. The newly installed table records exactly the same names that were on the previous one. But the names on the new version are more deeply ingrained in the table, making it easier for visitors to see them and run their fingers across them through the water.

“The Memorial reminds us not only of the sacrifice of the 40 women, children and men whose names are inscribed on that Memorial,” English told the crowd gathered today at the Memorial. 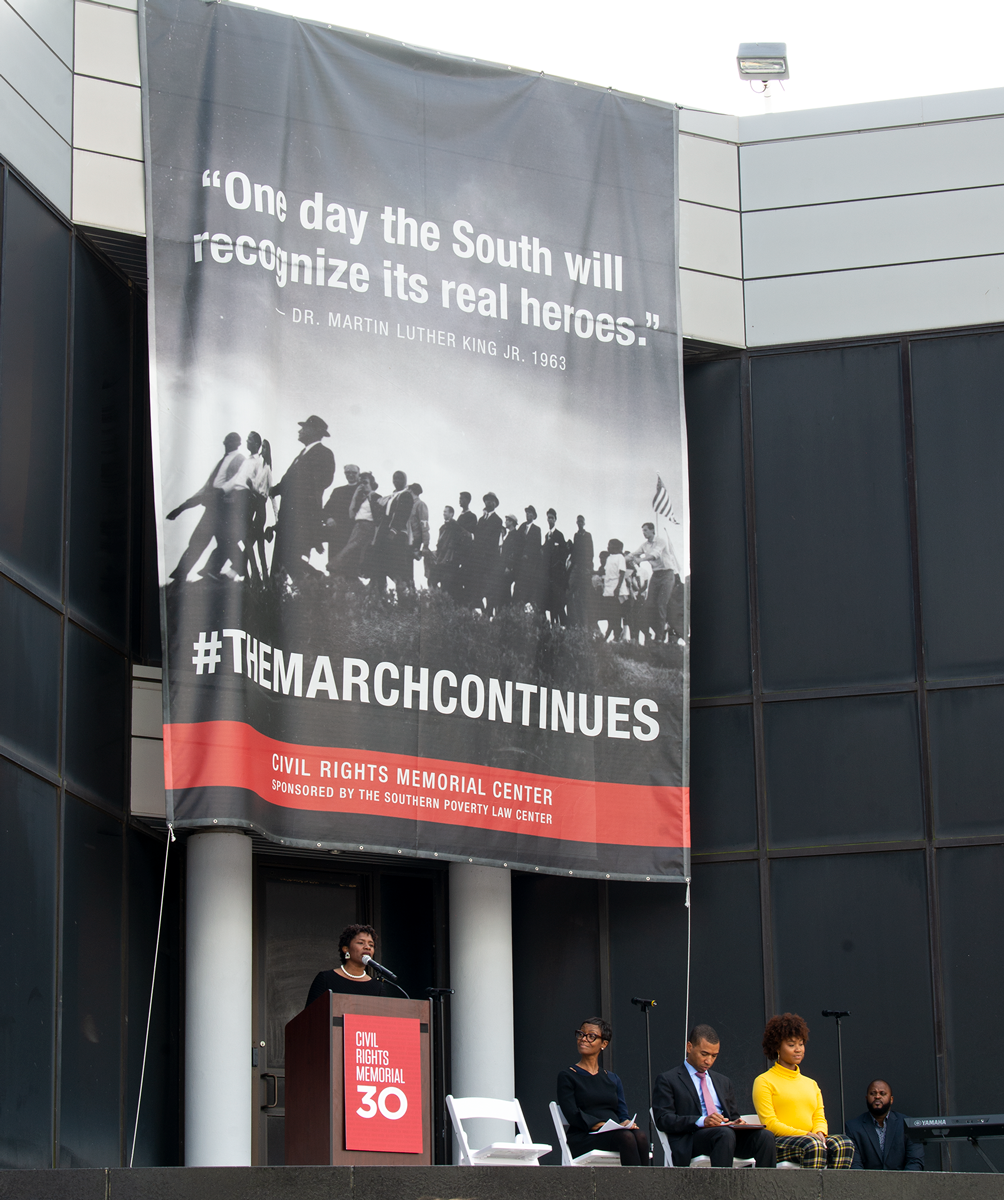 “But it also reminds us of a time in our country that reigned for centuries where the violence of white supremacy and terror tore apart communities who were fighting for equality and justice. It is a history that we must not forget. It is a history that we must not allow our children to forget. Today is a day of remembrance, but today should also be a moment of reflection, a reflection of how far we’ve come and a reflection of how much farther we have to go.”