Editor’s note: The names of the people in this story have been changed to protect their identities.

Every girl dreams of her wedding day. No girl dreams that the day will come in a medium-security prison.

While many brides-to-be spend countless hours dealing with the details of wedding venues, receptions and guest lists, my friend Daniela spent that time jumping through bureaucratic hoops.

Her fiancé, Winston, was sitting in the Stewart Detention Center in Lumpkin, Georgia, a place where nearly 2,000 undocumented immigrants caught up in the Trump administration’s dragnet are held on any given day. 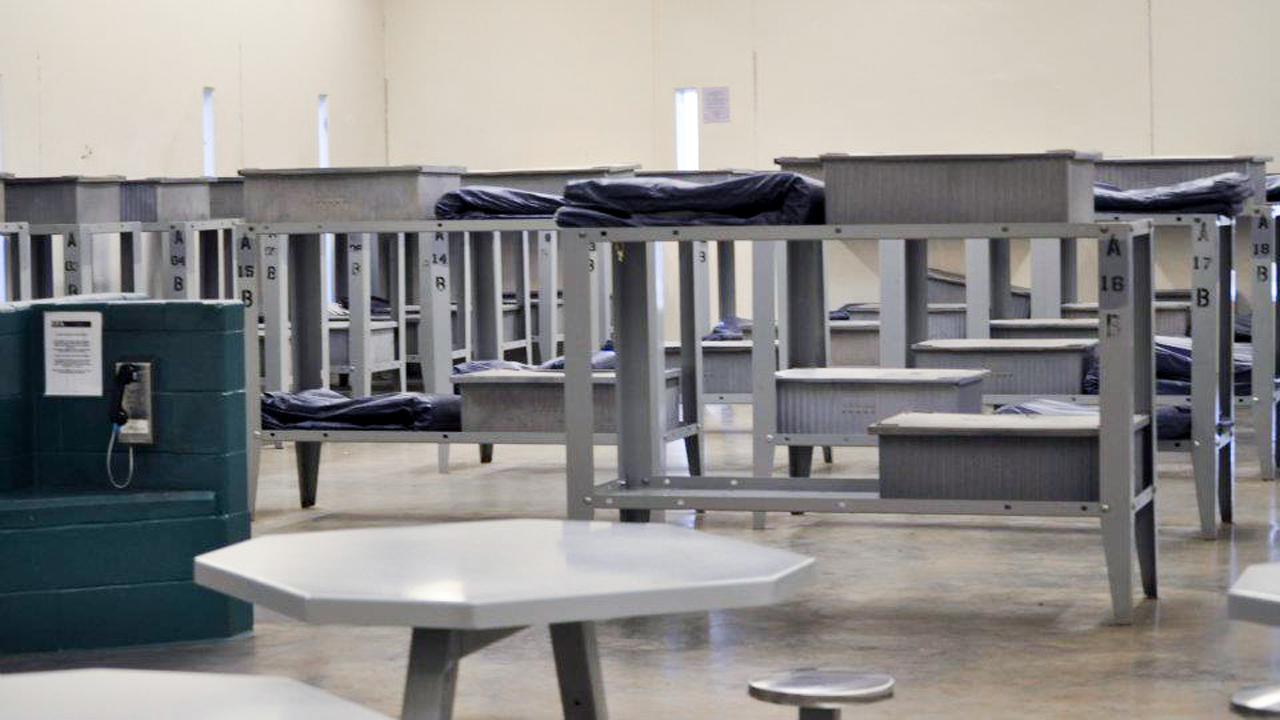 The interior of the Stewart Detention Center in Lumpkin, GA.

Winston had been living and working in the United States for more than a decade, most recently in South Carolina. He was not only a caring partner to Daniela, he was a father figure to her son, Eric, a preschooler, and helped Daniela provide for him.

Earlier this year, he was arrested for having a burned-out tail light and driving without a license. Suddenly, their marriage plans were thrown into turmoil. But Daniela was determined.

She had trouble getting a marriage license, because Georgia, where they were to be married, requires both parties to be present at the county clerk’s office. She found that Nashville was the nearest jurisdiction that would allow her and Winston to sign separately. So she drove back and forth across the South so that all parties involved could sign and fill out applications.

I had met Daniela in Lumpkin, where I work as project coordinator for the SPLC’s Southeast Immigrant Freedom Initiative (SIFI), which uses staff and volunteer attorneys to provide pro bono legal representation to immigrants detained in the southeastern United States. Winston is not a SIFI client, but his story of being arrested and thrown into deportation proceedings for a minor traffic offense is common.

At 10 p.m. on a recent Thursday night, I waited for Daniela to arrive at the hospitality house where she was staying, right next to where I live and work. When she arrived, I gave her a hug and asked if the paperwork was in order.

She looked at me with a smile.

“Tomorrow is the day,” she said. “We are finally going to be married.”

I was overjoyed. I realized that though this would not be a wedding with beautiful dresses and fancy cakes, we could still bring some beauty to a difficult moment.

She smiled. She agreed. We laughed.

I awoke early and got ready, making sure I picked a dress that was appropriate for the detention center’s dress code. Leaving my house, I saw the bride-to-be getting into her car. We were like giddy young girls – both filled with excitement.

On the way, I stopped at the Dollar General to buy some flowers for the ceremony and refreshments for an impromptu wedding reception (the groom would not be in attendance). Outside, I saw some wildflowers growing on the side of the road and stopped to pick those as well.

I met Daniela at the prison. I sat and colored with her son while we waited for security. Prison count happens at least five times a day, and we had to wait for that to be over. The pastor arrived. We were processed through security and escorted to the same legal room where all of us affiliated with SIFI conduct countless visits with refugees, asylum seekers and long-term U.S. residents who are locked up at Stewart.

In the family visitation rooms where Daniela had been visiting Winston, prisoners are separated from visitors by a panel of safety glass that prevents all physical contact. The legal visitation rooms, on the other hand, have a small slot to allow paperwork to be exchanged for signatures. 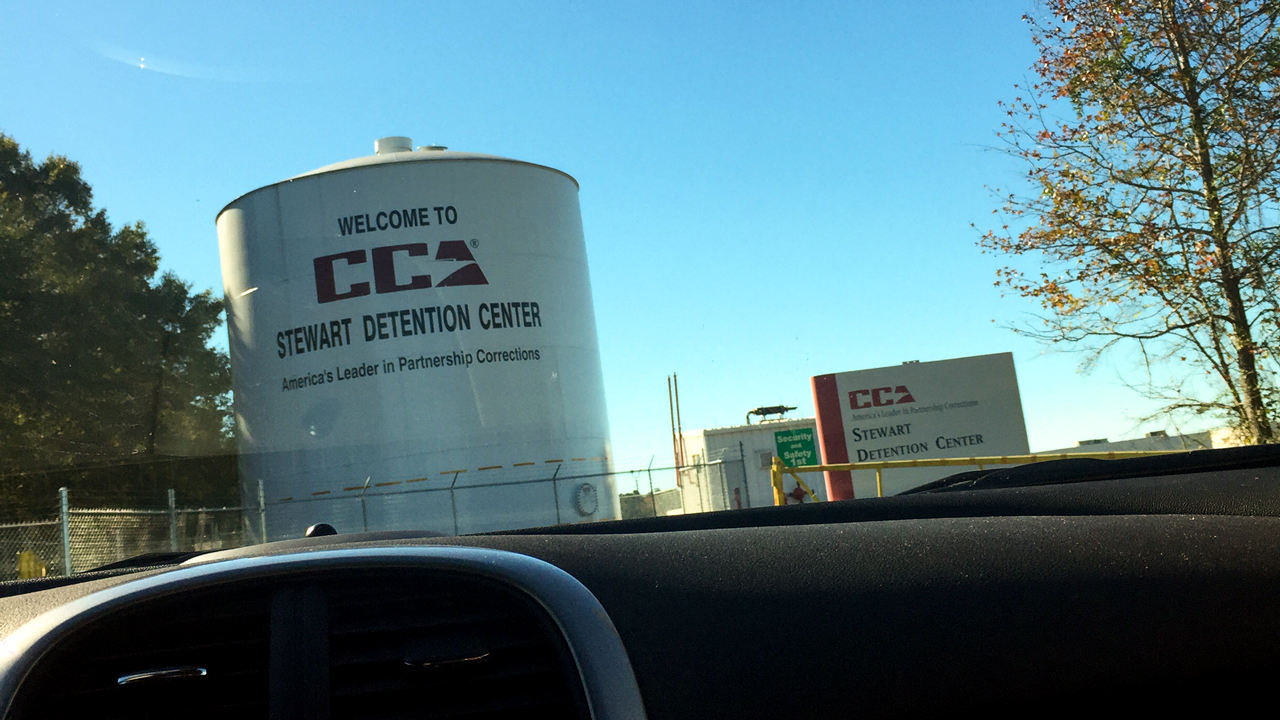 The Stewart Detention Center is run by CCA, a private prison company.

For the first time, Daniela and Winston met in the legal visitation room. Winston ran up to the glass and thrust his hands through the slot as far as they would go. Eric climbed onto the table and began holding Winston’s hand, shouting with excitement.

Tears streamed down Winston’s broad, weathered face as he bent down to kiss Eric’s tiny hands. Daniela, with a radiant smile, reached her hands through the glass as Winston bent down to kiss her fingers. This beautiful family’s reunion was set against the bleak backdrop of cinderblock walls and a cruel immigration enforcement system.

There is a phone for detainees to communicate with people on the other side. Because of the multiple parties, the pastor simply shouted the prayers and vows. Reaching their hands through the opening, Winston slipped a ring onto Daniela’s finger; she slipped one onto his. The ceremony lasted no more than 10 minutes. With that, they were pronounced husband and wife. He cried as his bride was escorted out.

Daniela’s journey as a bride wasn’t over. She would have to make the seven-hour drive to Tennessee so the papers could be processed there.

After visiting Winston again in the visitation room, where there is no contact, Daniela and Eric came back to my office. We had a small reception – orange juice, cookies and fruit salad. We talked a little. We toasted the bride. We took pictures together. It was already too late to make it to Tennessee; she left for the drive home.

Daniela texted me later to say she had arrived home safely. I thanked her for letting me share the moment with her.

And she thanked me for helping her have a “beautiful moment under such ugly circumstances.”

The couple’s future remains uncertain. Since their marriage, Winston has been released on bond. Now that they are married, Daniela can petition for him to get legal status.

But within the walls of Stewart, there is so much sadness and hardship. Outside those walls, there is the additional, immeasurable grief and longing felt by the loved ones of the detained men.

Working in Lumpkin, it becomes hard to see the happiness through the misery. The moments when that happiness has shone through have been few and far between.

That Friday morning was one of those beautiful moments.

Erica Thomas is coordinator of the SPLC’s Southeast Immigrant Freedom Initiative for the Stewart Detention Center. The SPLC is looking for private lawyers, interpreters and paralegals willing to volunteer a week of their time to help protect the due process rights of immigrants detained there.