Acts of violence against Latinos pile up amid anti-immigrant climate.

Keith Phoenix — who confessed to the 2008 murder of an Ecuadorian immigrant in Brooklyn by saying, "So I killed someone — that makes me a bad guy?" — has been sentenced to more than 30 years in prison. The case drew national outrage after the man's death was captured on camera.

According to investigators, Phoenix and another man, Hakim Scott, jumped out of their sport utility vehicle and began yelling racist slurs before pouncing on José Sucuzhañay and his brother because they were Latino and, the attackers thought, gay. A camera on a nearby tollbooth caught Phoenix laughing maniacally as he sped away, leaving Sucuzhañay mortally wounded in the gutter.

Phoenix and Scott each received 37-year sentences in August, though Scott was cleared of the more serious hate crime charges. 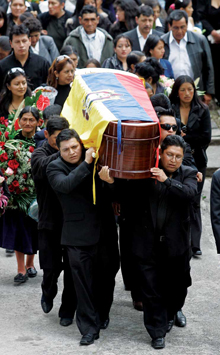 A final goodbye: An honor guard was part of a funeral service held in Ecuador for José Sucuzhañy after he was murdered by nativists in Brooklyn in 2008. Together with the murder of another Ecuadorian immigrant in nearby Long Island the same year, the killing drew national attention to anti-Latino hate violence.

That murder was among the more serious recent acts of violence against Latinos across the country. It came amid a volatile anti-immigrant climate — vigilantes actively patrolling the borders with Mexico, fear-mongering filling the airwaves, and states attempting to adopt sweeping changes to immigration policy that are likely to lead to illegal racial profiling.

Just days before Phoenix and Scott were sentenced, 18-year-old Christian Vasquez was beaten repeatedly in the Staten Island, N.Y., neighborhood of Port Richmond until his left eye swelled shut. According to police, his attackers took $10 while yelling anti-Mexican slurs and "Go home."

The case drew national attention after Staten Island Borough President James Molinaro told the Staten Island Advance, "These are not bias incidents … these are criminal acts." He later said the victim "could have been anybody."

In Arizona, Jason Bush and his co-defendant, a former teen prostitute named Shawna Forde who started and led a vigilante group called Minuteman American Defense (MAD), went to trial in January for killing a Latino father and daughter. Albert Gaxiola was also being charged as a co-conspirator in the murders. Bush and Forde will face a possible death sentence if convicted. The three are accused of attacking the family — the mother of the family was wounded but survived — in a bid to steal money to fund Forde's group.

Meanwhile, state leaders in Utah are under attack after drawing up a five-point plan to address immigration reform. The so-called Utah Compact is a declaration of principles meant to guide the state's discussion of immigration reforms.

The Utah Minuteman Project opposes those reforms, calling the compact part of a conspiracy between the Chamber of Commerce, churches and corporations to "put the derrieres of illegal aliens in the pews," project chairman Eli Cawley told KSL Newsradio in Salt Lake City.