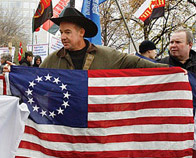 Globetrotting white supremacist financier and organizer Preston Wiginton (at right, showing the flag at a 2007 white nationalist rally in Moscow) was barred from entering the United Kingdom last week by Home Office authorities at London’s Heathrow Airport. Wiginton, a U.S. citizen, was trying to enter the U.K. to address the racist throngs at the tenth annual “Red, White and Blue” summer festival put on by the neofascist British National Party, or BNP.

The Home Office stated that it denied entry to Wiginton because it deemed his presence in the U.K. would not have been conducive to the common good. Wiginton has a close relationship with BNP chairman Nick Griffin, as well as ultra-right politicians and white nationalist academics and activists in Russia, the Texas native's adopted homeland. (Wiginton resides part of the year in a Moscow apartment he sublets from ex-Klan boss David Duke.) Wiginton also brags about friendships with the leaders of violent neo-Nazi skinhead gangs in Russia, and claims that he pumps $50,000 a year of his own money into the global white supremacist movement.

In the U.S. in recent years, Wiginton has appeared at racist skinhead gatherings and co-sponsored lectures with hate groups such as the Council of Conservative Citizens and the Michigan State University chapter of Young Americans for Freedom.

The Home Office’s barring of Wiginton is the latest indication that U.K. officials are cracking down on right-wing extremists from other countries, including the U.S. Earlier this year, the names of five U.S. citizens appeared on a list of 16 individuals banned from entering the U.K. for reasons of “fostering extremism or hatred.” (Wiginton was not among them, but right-wing radio host Michael Savage was.)

The BNP summer festival, meanwhile, took place Aug. 14-16 in Derbyshire, a county in the East Midlands region of England. The attractions included a carnival midway game in which participants hurled wooden balls at coconuts painted with the face of Sir Trevor Phillips, the black chairman of the U.K. Equalities and Human Rights Commission.

Around 1,500 anti-fascist demonstrators rallied outside the festival, chanting “Nazi scum off our streets.” BNP members and supporters taunted the protesters with sieg heil salutes. Nineteen people were arrested following a series of clashes near the front gate.

Capitalizing on resentment of Muslim immigrants, the BNP made significant political gains in local elections this year. And in June, two of its members were elected to serve in the European Parliament.